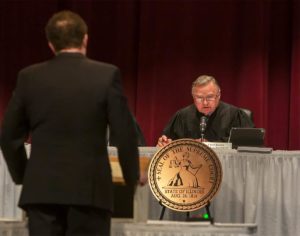 Illinios Supreme Court Justice Lloyd Karmeier hears oral arguments in a case heard Sept. 18 at Lewis & Clark Community College in Godfrey during a rare chance for high school and college students to see the state’s highest court in action. Karmeier, who was chief justice at the time until his three-year term ended Oct. 25, has tendered notice of his intention to resign his seat on the bench effective Dec. 6, 2020. (Credit: Illinois Supreme Court)

“It has been a privilege serving the people of Illinois,” he wrote in his letter, dated Oct. 29.

His three-year term as chief justice of the state’s highest court concluded Oct. 25. Chief Justice Anne Burke succeeded him as head of the court beginning the following day, and according to a spokesperson, Karmeier has requested his seat be filled by election, rather than appointment.

In an interview with Illinois Channel, he said he would not “run again considering my age.”

“I will, after I step down as chief and during this process, I will be making a decision as to whether I will finish my term, which would be in 2024, or allow someone younger,” he said in the late-September interview. “I’m 79 years old and if I stay I’d be 84 when the term ends. I don’t want to be on the court when someone might question whether or not I’m as strong or as alert or able to do the job. I’d rather go out when I think I’m still at the top of my game.”

The justice was first elected to the Supreme Court in 2004. That election, at the time, set a record as the most expensive judicial election in the country. He successfully won retention 10 years later.

During his time leading the court as chief, he helped secure its first budget increase in six years this spring. The branch will receive just more than $405 million from the state’s main checking account, a bump of about $60.5 million. That money will be used in part to alleviate costs paid by local governments for probation, court officials said.

Karmeier also reformed the Judicial Conference, which released what he called a “blueprint for the (court’s) future” at the beginning of October. It is a three-year plan that outlines a mission statement, vision edict and five core values meant to address issues affecting the branch and those who interact with it.

One of his other initiatives was continuing the Supreme Court’s tradition of “riding the circuit” about once per year. The seven justices travel to a different institution of higher education to conduct oral arguments. Students of all ages are encouraged to attend in an effort to elevate the profile of a branch of government that often does not get the same kind of publicity as the legislative or executive branches.

When Karmeier was in his mid- to late-20s, he clerked for former Illinois Supreme Court Justice Byron House. He later served as Washington County’s state’s attorney, clerked for U.S. District Court Judge James Foreman, practiced general law and was a circuit judge.

He recently celebrated his 54th wedding anniversary with his wife, Mary.