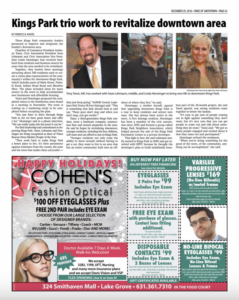 The Times of Smithtown published this piece in print on Dec. 29, 2016.

Together, they hosted three meetings attracting about 300 residents each to create a vision plan representative of the community’s wishes for downtown Kings Park, which includes parts of Main Street, Pulaski Road, Indian Head Road and Meadow West. The plans included ideas for more sewers in the town to help accommodate new businesses and affordable housing.

Tanzi and Henninger proposed the completed vision to the Smithtown town board at a meeting in November. The town is waiting on a marketing study to be completed before accepting the plan.

“You just have to drive through Kings Park to see we have great bones and offer a lot,” Henninger said in a phone interview. “We can really make this the jewel it can be.”

For their leadership and commitment to improving Kings Park, Tanzi, Lehmann and Henninger are being recognized as three of Times Beacon News Media’s People of the Year. 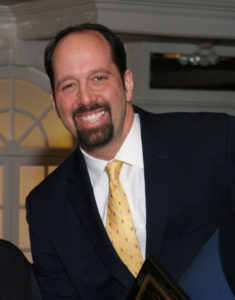 “They work hard to make Kings Park a better place to live. It’s their persistence against resistance from the county, the state and the town that makes them successful — they just keep going,” Suffolk County Legislator Rob Trotta (R-Fort Salonga) said. “This is something that kids should look at and say, ‘These guys don’t stop and when you don’t stop, you get results.’”

Tanzi, a third-generation Kings Park resident, owns a hardware company, construction firm and several properties in the area. He said he hopes by revitalizing downtown, younger residents, including his four children, will want and can afford to stay in Kings Park.

“Younger residents not only want the ability to move around without having to get a car, they want to live in an area that has an entire community built into an offshoot of where they live,” he said.

Henninger, a mother herself, agreed that upgrading downtown Kings Park is a way to keep residents and attract new ones. She has always been active in the town. A Fort Salonga resident, Henninger has been a member of the civic association since 1992 and formed a group called Kings Park Neighbors Association, which helped prevent the sale of the Kings Park Psychiatric Center to a private developer.

That fight is how she and Lehmann met. He moved to Kings Park in 2005 and got involved with KPPC because he thought the developer’s plan to build multifamily housing would not be good for the hamlet.

One of their immediate efforts has been to hold a concert series and farmers market on Main Street, a way Lehmann said he hoped would encourage other residents to begin utilizing the downtown area.

“This is a unique community and we love it,” Lehmann said. “Kings Park has a very small town feel and plenty of open space, so when we thought about revitalizing our downtown, we wanted it to still feel quaint and fit with the character of the community.” 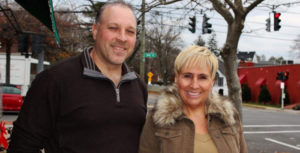 Henninger was quick to point out that while she, Lehmann and Tanzi helped to organize the project and make sure a plan was created, revitalizing downtown Kings Park was a community effort. The best part of the 18-month project, she and Tanzi agreed, was seeing residents come together to better the hamlet.

“It’s easy to get tons of people coming out to fight against something they don’t want, but it’s very rare that you can get people to come out and talk about something they do want,” Tanzi said. “We got so many people engaged and excited about it that they came out and participated.”

“When you’re doing something for the good of the town, of the community, anything can be accomplished,” she said.