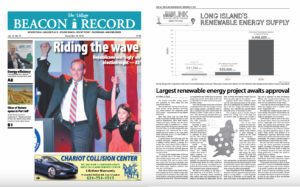 The largest renewable energy project ever proposed for Long Island has near unanimous support.

Four wind farms and two solar farms would be privately funded and built in rural areas in Pennsylvania, Ohio, West Virginia, Virginia and North Carolina, and the power generated would be transferred to a substation in central New Jersey and converted from AC to DC. Then, it would be shipped 80 miles underground and underwater by a transmission line and connect to the Long Island Power Authority’s grid at a 3.5-acre facility on Ruland Road in Melville.

A spokeswoman from Invenergy said the company submitted a proposal to LIPA, and is hoping it will be granted a contract. It is unclear how much money LIPA is willing to pay for the electricity Clean Energy Link will generate, but if the power authority approves the project, it is expected to be operational by the end of 2020.

“I’ve been in this business since 2003 and this is probably one of the most, if not the most exciting project we’ve done,” Mike Polsky, Invenergy’s CEO, said at a press conference on Oct. 24. “It’s a very remarkable, bold and transformational step for New York State, and despite some naysayers, whatever they may say, it will happen.”

Clean Energy Link is a step toward achieving a mandate set by Gov. Andrew Cuomo (D) in August that 50 percent of New York’s electricity needs to come from renewable energy sources by the year 2030. The first checkpoint is a requirement that utilities need to purchase energy from nuclear power plants in the state by April 2017 in an effort to prevent the facilities from closing.

“New York has taken bold action to become a national leader in the clean energy economy and is taking concrete, cost-effective steps today to safeguard this state’s environment for decades to come,” Cuomo said in a press release. “This Clean Energy Standard shows you can generate the power necessary for supporting the modern economy while combating climate change.” 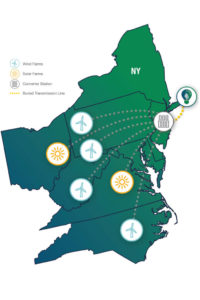 How the wind and solar energy would make its way to Long Island. Image from Invenergy.

Suffolk County Executive Steve Bellone (D) said because Nassau and Suffolk counties have about 3 million residents, it is a “notoriously very difficult place” to build anything. He expressed his support of the renewable energy project at a press conference in part, he said, because Long Island has experienced extreme weather and other impacts from increased carbon dioxide emissions.

“We have to be leaders on this issue — Long Island has to be out front,” he said. “… Part of that leadership means identifying what makes sense and maximizing the potential of the things that make sense. We are more at threat from climate change than just about any other region in the country.”

Legislator Sarah Anker (D-Mount Sinai) said the most important aspect of the project must be its affordability for residents. According to the U.S. Energy Information Administration, New York had the seventh highest electricity prices in the country in 2015.

“The residents need to benefit. Period,” Anker said. “Energy costs are too high and we need to come up with a way to make it affordable for Long Island residents.”

One of her other concerns is if local communities are able to give feedback before LIPA officials decide whether to grant Invenergy a contract for the Clean Energy Link project.

For Brookhaven Town Supervisor Ed Romaine (R), Clean Energy Link makes environmental sense because by increasing New York’s use of renewable energy, the state’s reliance on foreign fuel lessens, and therefore its carbon dioxide emissions will decrease. He also said the proposal is economically sound because the project would be constructed in states where land is cheaper and in more abundance than on Long Island, a point echoed by other local politicians.

State Assemblyman Steve Englebright (D-Setauket) said he’s opposed Invenergy’s other project on Long Island — a 24.9 megawatt solar farm in Shoreham on the former Tallgrass Golf Course. It was approved by LIPA in May and is supported by other Brookhaven officials, who recently passed changes to the solar code prohibiting trees from being cut down for the construction of solar arrays.

“I don’t like the idea of solar farms on Long Island that impinge upon or displace green space,” Englebright said.

He added that transporting the power the Clean Energy Link project would provide underground is smart, because it would not be subject to disruptions due to weather.

“LIPA would be wise to move in the direction that this offers, which is the renewable direction,” Englebright said. “We’re an oceanic island, and putting more greenhouse gases into the atmosphere ultimately drowns us.”

To Councilwoman Jane Bonner (C-Rocky Point), the most impressive aspect of Invenergy’s Clean Energy Link proposal is its “multipronged” approach. Renewable energy should not be produced by just wind or solar individually. The project’s potential impact is greater because it would make use of both.

She also said lower energy bills would go a long way toward generating community support. According to Invenergy, the project’s proposed start date was chosen to make full use of federal incentives for solar and wind energy production, a savings that would be passed along to residents.

Pine Barrens Society Executive Director Dick Amper agreed that community support is imperative for the success of the project.

“If the people who produce solar cut down forests for it, or put it in residential neighborhoods or replace farms that produce food for it, the public is going to turn against solar,” he said. “It took 25 years for everybody to come along and agree we need renewables. They’re not going to like them if we put it in bad places, and we can’t afford to have the backlash because we need solar.” 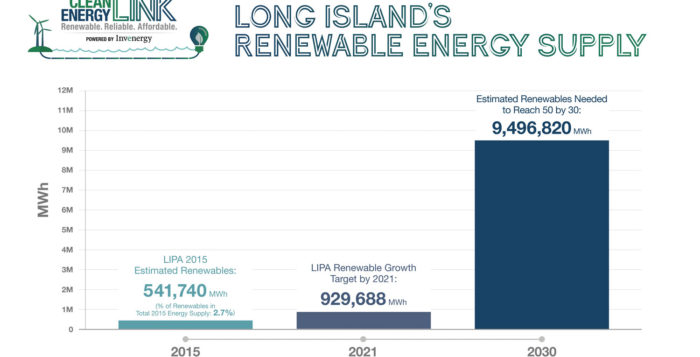 The growth Long Island could see in renewable energy resources if the project is approved. Image from Invenergy.