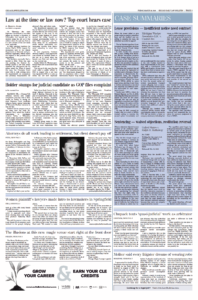 The Chicago Daily Law Bulletin published this piece in print on Friday, March 16, 2018.

Published by the Chicago Daily Law Bulletin on March 16, 2018

SPRINGFIELD — On Thursday, the state Supreme Court heard a case that hinges on whether a Freedom of Information Act lawsuit can be decided using the law as it was written when the suit was filed or if a new version of the law holds more authority.

In 2013, appellant Institute for Justice filed a FOIA request for documents held by the Illinois Department of Financial and Professional Regulation, which denied the request on the grounds of six exemptions.

The Institute eventually filed a lawsuit in 2014. While the case was pending, the General Assembly passed a law that newly classified the information the Institute asked for. When it heard the case, the Chancery Court sided with it, both striking down the department’s six exemptions and granting compensation for attorney’s fees and other costs.

The department appealed and the 1st District court reversed the decision that the old version of the law applies to the case. In his dissent, Judge Mathias W. Delort warned the ruling “would encourage governmental bodies to stall FOIA responses” and “actively lobby for an amendment which shields particularly embarrassing records from disclosure,” according to court documents.

In oral arguments, Institute attorney Jeffery J. Lula argued the case should be decided based on the law as it stood when the lawsuit was filed, and not based on the current law.

Justice Robert R. Thomas questioned what sort of precedent that would set.

“Let me put it this way: Can the court order a public official in 2016 to comply with a law that was repealed in 2015 or to take an action the law now expressly forbids?” he asked.

“It can because what this lawsuit is seeking is to rectify or redress the wrongful denial that occurred in 2013, and that is the law that is relevant to the [Freedom of Information Act] request,” Lula said. “Indeed, if we were seeking prospective relief in this case, it would be looking to adjust the department’s behavior in the future, for future FOIA requests, for FOIA requests that haven’t even been made yet.”

The department’s main point, argued by assistant attorney general Aaron Talen Dozeman, was that FOIA authorizes a court to determine what information the law permits the public to have access to in the present and future, not the past.

Given the facts of the case, though, Thomas inquired whether it was a fair characterization to say “the department dragged its feet on compliance with a valid” information request “long enough to see the law changed,” and if so, whether that is a public policy the court would want to encourage.

Dozeman said the department responded to the request within the time frame specified by law, and that action ended its obligation with regards to timing. “It just so happened that the law changed” between when the Institute’s request was denied and when the lawsuit was heard.

The case is Institute for Justice et al. v. The Department of Financial and Professional Regulation, Nos. 122349 and 122411.

The case is one of two the state’s Supreme Court heard at the University of Illinois at Urbana-Champaign on Thursday.