Law enforcers object to cutback to only one license plate 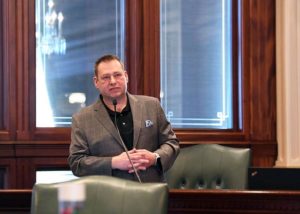 State Rep. Allen Skillicorn (R-East Dundee) has proposed legislation that would reduce to one the number of license plates issued by the state for cars, trucks and trailers. Illinois law enforcement organizations oppose the bill, saying it would make the jobs of police officers more difficult. (File photo credit: Illinois House of Representatives staff)

SPRINGFIELD — Illinois law enforcement groups want to pump the brakes on proposed legislation that would do away with a requirement that Illinois cars display a front license plate.

A bill proposed by East Dundee Republican Rep. Allen Skillicorn would instruct the secretary of state’s office to issue only one license plate to drivers, instead of two, for cars, trailers and trucks. The plate would attach to the rear of the vehicle.

But removing the front plate would make it harder for police officers and other law enforcement officials to do their jobs, said Ed Wojcicki, executive director of the Illinois Association of Chiefs of Police.

“It would make it much more difficult to identify people who violate the law,” he said.

Opposition also is coming from the Illinois Sheriffs’ Association, a spokesperson for the organization said, because the front license plate is a “tool we use in our toolbox. We don’t need any more restrictions.”

“The loss of the front plate would disrupt the technology used by the Tollway to collect tolls, which often relies on matching the front plate with the rear plate to identify a vehicle,” Rozek said.

He said that could jeopardize as many as 3 million transactions annually, at a loss of more than $6 million annually.

Illinois spends $3.20 to manufacture two license plates, according to a news release from Skillicorn’s office. Making only one would save 60 cents.

“Changing the plate requirement from two to one will save the state around $800,000,” he said. “Considering the state’s poor financial situation, we should be looking at everything we can to cut costs, and this a good option.”

“We don’t often comment on policy issues that are raised as a way of saving money,” Wojcicki said. “In this case, the amount of money to be saved is so small. When you look at the benefits of having a front plate, this is a pretty ridiculous way of saving money.”

In an emailed statement, a spokesperson from Secretary of State Jesse White’s office said, “The secretary of state joins law enforcement in opposition to this legislation based on the public safety concerns voiced by the law enforcement groups.”

The legislation is House Bill 1623. It will be heard in a Vehicle & Safety Committee hearing at 9:30 a.m. Wednesday.