Parents could opt their children out of the lessons 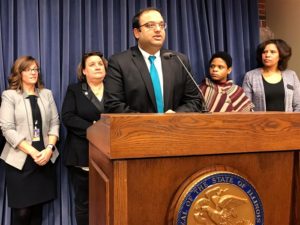 The curriculum, not currently mandated, would include information children and youth need to prevent bullying, foster healthy relationships and prevent abuse or violence, a group of advocates and lawmakers said at a news conference.

The bill’s Democratic sponsors, Sen. Ram Villivalam, of Chicago, and Rep. Kathleen Willis, of Addison, both said students want such materials, especially those from districts that do not include lessons on sexual education or diverse sexualities and genders.

Lessons for students in kindergarten through second grade would primarily focus on personal safety, being a good friend and how to speak to parents, said Brigid Leahy, Planned Parenthood of Illinois’ senior director of policy. Beginning in third grade, students would begin learning about safe relationships and physical changes.

Trey Graham, a self-identified queer Marion High School senior, said throughout their education, they and their peers learned “very little” about sexual health and personal safety.

“When school districts can ignore the health and wellness of a whole community, we are left to figure out things on our own,” they said. “The status quo is just not right.”

Villivalam said he acknowledges the initiative’s detractors may argue “this bill goes too far and that it shouldn’t be required.”

According to the legislation, though, “schools have a responsibility to address child abuse, harassment, bullying, interpersonal violence, and personal safety issues,” all of which can impact a student’s health and progress in school.

Districts would be required to inform parents about the planned classes at the beginning of each school year, Leahy said. Parents would be able to opt their children out of these lessons, which are to be implemented no later than July 1, 2021, with a written note.

“Illinois has consistently been the anchor in the Midwest when it comes to inclusion, equality, advancing justice and ensuring that all communities are respected and supported,” Equality Illinois Public Policy Director Mike Ziri said.

Not permitted under the REACH Act — Responsible Education for Adolescent and Children’s Health — is the promotion of “any religious doctrine” or exclusion of the “health needs of individuals who are intersex or individuals of diverse sexual orientations, gender identities, or gender expressions,” according to the bill.

Abstinence is permitted as an array of information and skills taught to students, Leahy said.

“It is recognized in the legislation as one of the things that helps young people stay safe and healthy, and that is and should be part of the instruction,” she said. “But we want to make sure that youth get all the information that they need. We want to recognize that there may be, in classes, students that have been or currently are or will be sexually active and they need to be prepared for that.”

Similar curriculums are mandated in 29 other states and Washington, D.C. — Iowa and Kentucky are the states nearest Illinois to do so.

The REACH Act is Senate Bill 2762. It has nine co-sponsors, including Villivalam, all Democrats.