Lawmakers aren’t the only ones who can draw districts, California shows 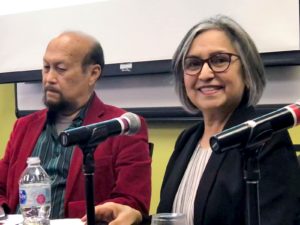 Jeanne Raya (right) and Gil Ontai, members of California’s 14-person, voter-staffed commission that was given redistricting power about a decade ago, spoke Wednesday at the Wyndham Springfield City Centre to members of the Coalition for Honest and New Government Ethics organization. The CHANGE Illinois group is trying to shift control of redistricting in this state from lawmakers to citizens. (Capitol News Illinois photo by Rebecca Anzel)

SPRINGFIELD — A coalition of interest groups want citizens, rather than lawmakers, to decide the boundaries of their own political districts.

CHANGE Illinois — the Coalition for Honest and New Government Ethics — is pushing for an “independent, transparent” process that would draw Illinois’ political maps in a way that ensures “communities are fully and fairly represented,” according to a news release.

It is a reform the group has been working toward since 2012, and requires a constitutional amendment to change.

The state’s governing document gives the General Assembly the power to determine, and the governor to approve, political districts that are “compact, contiguous and substantially equal in population.” But the process is often complicated and favors the party in power.

The coalition invited two members of California’s redistricting commission, a body that achieved what CHANGE Illinois hopes to in the Land of Lincoln, to explain how their efforts impacted that state’s elections and legislators.

Gil Ontai, a Republican, and Jeanne Raya, a Democrat, both travel across the country — to Maryland, North Carolina, Pennsylvania, Texas and Virginia, to name a few state — speaking about their role in California’s most recent map-drawing process.

“What I keep hearing is people are unhappy with the status quo,” Raya said. “They feel they are not being heard because they can’t elect the representatives who will listen to them.”

Right around the most recent U.S. Census a decade ago, California passed a citizen-driven ballot initiative that transferred redistricting power from the legislature to a 14-member, voter-staffed commission.

Five members were Republicans, five were Democrats and the remaining four were from neither party. The entire group reflected the demographic and geographic diversity of the state’s population.

California’s maps had not changed for the 20 years prior to the group’s appointment — “there were deals cut between the two parties,” Raya said — and districts were drawn to protect politicians and party interests. 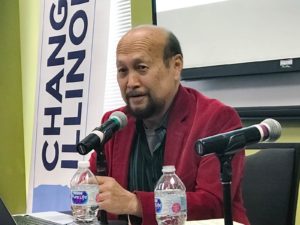 Gil Ontai, a Republican member of a voter-led redistricting commission in California, speaks during Wednesday’s event at the Wyndham Springfield City Centre to members of CHANGE Illinois who are hoping to do something similar here. (Capitol News Illinois photo by Rebecca Anzel)

“We came across some really bizarre maps prior to our engagement,” Ontai said.

After the commission redrew the political maps, though, the competitiveness of some districts increased, majority minority districts were created, and more first-time state representatives were elected.

Raya cited a study that found California districts were 70 percent more competitive than other districts in the country after remapping, and said 10 elected offices were no longer assuredly safe. She added that in the 2012 election, the first after the newly-drawn maps were effective, the state gained 38 first-time lawmakers members.

The commission was not without its hurdles — it had only seven months to complete its task; members had to balance their role and their professional and home lives; and they had to receive training on map-drawing.

That last point, although of some debate at first among California lawmakers and the public, was not as much of a concern for Raya.

California’s citizen commission, which is overseen by the state’s auditor general, is not exactly what CHANGE Illinois is proposing. The group’s constitutional amendment would place redistricting under the authority of the state’s Supreme Court.

According to the proposal, the chief justice and most senior justice “who is not elected from the same political party” would choose 16 Illinoisans to form a committee comprised of seven Democrats, seven Republicans and two independents.

The group’s actions would be transparent, just as those of California’s commission are — documents, meetings and materials would be available to the public.

One potential problem created by this effort is that it would require state Supreme Court justices to have political affiliations, which the Constitution currently does not do.

Madeleine Doubek, executive director of CHANGE Illinois, asked what the two would say to lawmakers who are resistant to change the process of drawing political maps.

“The legislators can try to keep themselves [in power] forever if they like, but the one thing they can’t really control is the fact that your state is changing around you. You don’t have control over the changing demographics or the changing economic issues or manufacturing plants that come and go,” Raya said. “To hold onto this one thing is just, in my view, completely artificial, even if you’re thinking that you’re using it as a means of controlling something.”