Lawmakers call for caution on 5G, the next wireless wave

Proposed bills would allow panel to study health risks, give people a voice in infrastructure siting 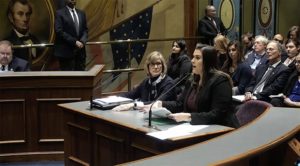 SPRINGFIELD — First, there were cordless phones and text messages. Then, internet access and video calls.

Now, wireless’s fifth generation will drive mobile phone speeds even faster and allow for advances in telemedicine and management of traffic signals, for example, according to the Federal Communications Commission.

But two lawmakers, Western Springs Democratic Sen. Suzy Glowiak Hilton and Elmhurst Republican Rep. Deanne Mazzochi, want to give residents, legislators and industry experts a chance to weigh in on the network upgrade.

“I think government really works best when the residents are engaged and active,” Glowiak Hilton said.

She asked five officials to speak to legislators on a Senate health committee Tuesday regarding concerns her constituents have about “potential effects” of 5G infrastructure. Their comments were decidedly mixed.

Those in favor of the wireless network upgrade said it would spur economic development and potentially save lives.

Bethanne Cooley, assistant vice president of a group representing the American wireless communications industry, said 3 million jobs will be created nationally — including 2,500 in Chicago and 1,800 in Aurora. She added first responders could reply to an emergency 60 seconds faster.

“We believe that this state should have the best data system possible, but would you condemn your fellow citizens to disease and death in the process?” asked Paul Héroux, director of the occupational health program at McGill University in Montreal.

Wireless companies, including T-Mobile and AT&T, must adhere to network regulations instituted by the FCC. According to that agency, “at this time, there is no basis on which to establish a different safety threshold.”

“5G is not new — it’s just part of the spectrum. It’s the same old stuff,” said Eric Swanson, professor of physics at the University of Pittsburgh. “Radiation has been perfectly understood since 1873; it’s the most perfectly understood physical phenomenon in the universe.”

Glowiak Hilton proposed a measure establishing a 12-member group of lawmakers, state officials and experts to “identify any major health risks associated with the proliferation of 5G infrastructure” by 2021. It is an effort, she said, to “have my residents feel … that they’re comfortable in their own homes.”

Constituents in Mazzochi’s district want to have a say in where 5G towers and other infrastructure are installed, she said. Her legislation seeks to provide state residents an “avenue” to register complaints, comments and suggestion with their local officials.

“As small cell tower deployment rapidly increases, residents are understandably caught off guard and feeling like they have zero say in this process,” Mazzochi said. “Our goal is to give our residents as strong of an opportunity to be heard, and object to pole placements and locations within the narrow space we have available under the federal guidelines.”

The telecommunications industry does not agree, she added, because company officials do not want to have different application processes across the state. But by “elevating uniformity and sacrificing local input on these issues,” Mazzochi said, they are creating “agony and strife” instead.

Both pieces of legislation — Glowiak Hilton’s Senate Joint Resolution 55 and Mazzochi’s House Bill 4653 — have yet to be considered by a substantive committee.