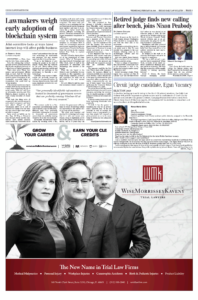 The Chicago Daily Law Bulletin published this piece in print on Wednesday, Feb. 28, 2018.

Published by the Chicago Daily Law Bulletin on Feb. 28, 2018

SPRINGFIELD — First, there was the web. Then, social media.

Now, the cutting-edge technology that powers cryptocurrencies like Bitcoin could be at the heart of a third wave of digital innovation.

That’s what some Illinois lawmakers and government officials think, at least. And it is why they held a joint committee hearing this week to explore blockchain, an unchangeable, sequential ledger of transactions that could beef up virtual security.

If the internet started as a way to connect users in chat rooms and by e-mail, then evolved into the age of social media, “Web 3.0” will focus on information security, said John Mirkovic, deputy recorder at the Cook County Recorder of Deeds’ Office.

“We built this thing we’re all connected to, but now we can get in each other’s computers and steal each other’s things,” he said. “Blockchain allows us to sort of reassert our claims over our identity and control what other people are able to access.”

Some are not as bullish on the idea. Rep. Al Riley, a Democrat from Olympia Fields and the committee’s most critical member, called blockchain “theoretical in its nature” and cautioned that like any new technology, its weaknesses and problems will only become apparent after it is put into use.

“I am in the business of protecting the people in the state of Illinois. That’s what my business is,” he said. “We’re talking about putting in and trusting records and things that are germane to the government to basically a new technology.”

Currently, large stores of information are generally housed by entities in one general location. In the case of governments, that could mean databases protected by outdated software.

“The current model is so fundamentally and ridiculously unsafe that it’s almost a farce at this point,” Mirkovic said. “Our personally identifiable information is located in thousands of government servers that are probably running Windows 95 at this very moment.”

Blockchain decentralizes information by breaking down a file, encrypting each piece and storing it in random locations across many computers. The users with permission to see a particular file can use blockchain to put the document back together and read it on demand, but a hacker would have extreme difficulty reversing the process. Therefore, information becomes remarkably complicated to infiltrate.

Five state and county agencies formed the Illinois Blockchain Initiative in November 2016 to study the technology’s potential government application and economic impact. It made the Prairie State the second in the country, behind New York, to explore blockchain.

What the trio hoped to do, Mirkovic said, was further the conversation so that legislators can begin setting standards, practices and regulations for state use of blockchain in the next several years.

For now, Mirkovic said the question lawmakers should consider is whether the government will continue its trend of following behind the innovations of the private sector or help set the narrative.

“We could work together and develop this technology and ensure that it is safe and secure and, frankly, cheap to implement, or we can let the private sector do it in a bubble, and in 10 years they can come and sell it to us at 10 times the price,” Mirkovic said.

Two bills proposed by Rep. Michael J. Zalewski, a Democrat from Riverside, could encourage the General Assembly to take that first step by implementing blockchain and cryptocurrencies in Illinois practices.

Zalewski is the chairman of the Revenue and Finance Committee and a member of the Cybersecurity, Data Analytics & IT Committee — the two committees who held the hearing. One measure, House Bill 5335, would mandate the Department of Revenue to accept virtual currencies as a form of payment of state taxes.

It also stipulates that “the Department shall convert such payments to United States dollars at the prevailing rate within 24 hours after receipt of the payment and shall credit the taxpayer’s account with the converted dollar amount.”

The measure would be the first time Illinois deals with cryptocurrencies. For instance, Illinois’ investment portfolio does not include them because “[s]tate statutes limit the types of investments the state treasurer’s office can pursue. Currently, cryptocurrencies are not one of those types,” Greg Rivara, spokesman for Treasurer Michael Frerichs said in an e-mail.

The other, House Bill 5553, would allow blockchain to be used in some instances, excluding the termination of a health insurance or utility policy or eviction or foreclosure of a residence.

It also prevents a home-rule unit from regulating blockchain independently.

“I think it has the power to transform the way we do government,” Zalewski said. “It has the potential to sort of reshape the societal scope of government in a way that people will respond to, given pressure on us to do something to reform our old, antiquated systems.”