Worries private Foundation will have to auction items to repay $9.2M still owed on loan 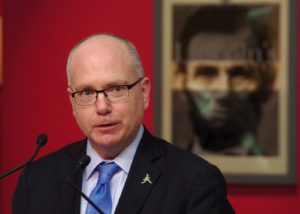 SPRINGFIELD — The foundation that supports the 16th president’s library and museum mismanaged its assets in a way that could put an “extraordinarily important” collection of more than 1,000 Abraham and Mary Todd Lincoln artifacts at risk of being auctioned off, the museum’s chief has told lawmakers.

If that happens, Abraham Lincoln Presidential Library and Museum Executive Director Alan Lowe said, it would be “devastating” to the institution.

The collection includes the bloody gloves the former president had in his pocket when he died, his alleged stovepipe hat and a huge number of Mary Lincoln documents. The Abraham Lincoln Presidential Library Foundation — a private entity separate from the museum, which is a state agency — borrowed $23 million to purchase the artifacts in 2007 from Louise Taper, who was on the foundation’s board at the time.

The loan comes due in October, and the foundation still owes $9.2 million, Lowe said. Because the foundation retained ownership of the collection, there is a “great concern” it will auction those materials to raise enough money to pay back the bank.

“To lose it would be a real loss to obviously our institution, but I think to the state as well. For us, the auction of even one of those items would be a huge loss in many ways,” Lowe told legislators during hearings last month. “Historically and educationally, it’s a rich collection of documents and artifacts. But reputationally, it would devastate the institution.”

The director said the Library and Museum uses the collection in exhibits, for research and in educational programs, so losing access to the artifacts — having them “go back out into private hands” — would be a “devastating loss.”

But perhaps the greater damage, he added, would be to the institution’s reputation.

“No one in the country differentiates between us as a state agency and the private foundation,” Lowe said.

Foundation Vice Chair Nick Kalm said in a written statement to Capitol News Illinois, “…The ALPLM’s director reaffirmed that the museum relies on the important role the ALPLF plays in supporting the ALPLM.  Part of that role includes acquiring collections, including the Taper Collection, at the request of the state of Illinois. We agree with the director and look forward to continuing our work together to secure Lincoln artifacts in the public realm for posterity.”

When there were news reports last summer that the foundation was seeking an auction house to sell artifacts, Lowe said, previous donors called him to make sure items given to the institution would not be included in an auction.

Lowe added if an auction were to occur, any future donations “will dry up. At that point, your institutional reputation goes down the drain, and it would be a huge blow to the ALPLM,” he said.

After listening to the director’s testimony, Rep. Stephanie Kifowit, a Democrat from Oswego, said she wanted to make sure the museum’s administration learned something from this “precarious situation.”

“I just want to make clear for the record that we’re not going to trust an independent foundation with very important artifacts in the future,” she said.

Before taking this position about three years ago, Lowe worked for the Ronald Reagan Library, Franklin Roosevelt Library, George W. Bush Library and the office of the National Archives that oversaw all presidential libraries.

The libraries had a close relationship with their corresponding foundations, he said. Typically, he would approach the foundation at the beginning of each year to inform them of what educational programming and exhibits the museum would like to host. The foundation would then raise the money to cover those costs.

He would also mention presidential-related artifacts coming on the market that year that he wanted the foundation to look into purchasing for the museum. If the foundation raised enough money to do so, it would donate the item to the museum.

“That’s what we need to have here,” Lowe said.

“If I pay a membership [fee], do we know where that money goes?” he asked.

“At this point, I do not know where that money goes,” Lowe said. “I know that, under our legislation, the foundation operates that program. They can use that money at their discretion. It’s supposed to be used toward our support, but as part of the concerns, frankly, over the last year of transparency with the foundation, I do not know specifically how those funds are spent.”

He added no one outside the foundation would have access to that information.

McConchie also asked about what the foundation’s annual financial statement filed with the federal government revealed. Lowe said the most recent document he has seen was from tax year 2016, which showed the foundation was given $1.7 million in donations.

Lowe testified before House and Senate panels with a budget request of $1.7 million, none of which would go toward the foundation. He said the money would be spent on additional staff to maintain the museum and library’s grounds and to begin the process of digitizing some of its other collections, housed on eight miles of shelving.