Published by Capitol News Illinois on May 29, 2019 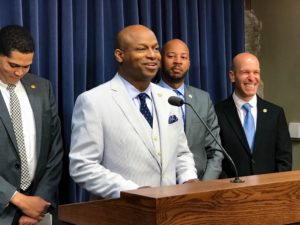 Rep. Emanuel “Chris” Welch, D-Hillside, says Wednesday that women’s rights are “under attack across this country,” in states such as Georgia, Alabama, Missouri and Ohio, but he is proud the Illinois House approved the Reproductive Health Act. He encouraged the Senate to follow the chamber’s lead. With Welch (from left) are Sen. Robert Peters, D-Chicago, Rep. Lamont Robinson, D-Chicago, and Rep. Bob Morgan, D-Deerfield. (Capitol News Illinois photo by Rebecca Anzel)

SPRINGFIELD — Six male, Democratic lawmakers on Wednesday encouraged their Senate colleagues to follow the House in approving a bill that would repeal and replace Illinois’ abortion law.

In part, the Reproductive Health Act creates access to contraception, pregnancy benefits, diagnostic testing, abortion procedures and other related health care as a fundamental right, forbidding the state or local governing body from restricting access to those things for women and men.

Rep. Emanuel “Chris” Welch, a Democrat from Hillside, said the group was “strongly in support” of protecting women’s rights in the state.

“This is about a woman and her doctor making decisions amongst themselves. Men don’t have a role in that — we have absolutely no role in that,” Welch said. “I think today it’s important that we encourage our Senate to stay strong and do the right thing.”

On Tuesday, advocates were working to secure a favorable outcome while lawmakers debated the bill on the House floor. Sixty votes were needed to approve the act — it received 64 Democrat votes. Fifty lawmakers from both parties voted “no,” and four Democrats voted present.

Grayslake Democratic Sen. Melinda Bush, the bill’s Senate sponsor, said she is confident the measure will pass in her chamber and make it to Pritzker’s desk.

“The Illinois state Senate is not going to leave this place without passing the RHA. I absolutely believe that, or I wouldn’t be standing here,” she said. “We absolutely, I believe it 100 percent, will get this done. It has to get done.”

In a statement Tuesday, Pritzker said he looks “forward to continuing my work as an ally by signing the Reproductive Health Act into law.”

Sen. Robert Peters, a Democrat from Chicago, said his colleagues should “stand on the right side of history.” 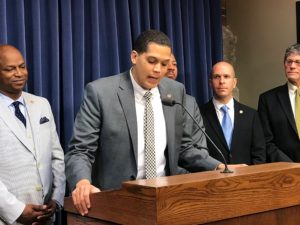 Sen. Robert Peters, D-Chicago, says Illinois should “be more than a blue dot” at a news event Wednesday in Springfield. If the state Senate follows the House’s lead and approves the Reproductive Health Act, sending it to Gov. J.B. Pritzker’s desk, the chamber would be “on the right side of history,” he said. With Peters (from left) are Rep. Emanuel “Chris” Welch, D-Hillside, Rep. Lamont Robinson, D-Chicago, Rep. Bob Morgan, D-Deerfield, and Personal PAC President Terry Cosgrove. (Capitol News Illinois photo by Rebecca Anzel)

“Illinois should be more than a blue dot — we should be a model for reproductive justice and organizing,” he said. “We cannot go back to the days of hangers and shadows. We cannot reduce the right to privacy. We cannot fail in our fight for equality and justice. We must pass the RHA.”

In response to a reporter’s question, Terry Cosgrove, president of Personal PAC, said the House Republican caucus’ decision to allocate their time during Tuesday’s debate to one speaker — Assistant Minority Leader Avery Bourne, a Republican from Raymond — was a “cheap political ploy.”

Bourne, who is pregnant, questioned Chicago Democratic Rep. Kelly Cassidy for about 45 minutes about the Reproductive Health Act. She asked for specific definitions, why current statutes would be repealed, and what the impact of changes would be, among others.

“I also think it was, from my point of view, it was a cheap political ploy because the Republicans have faced criticism about men telling women what to do and so I think that was their — but the debate was very respectful, she asked her questions and Rep. Kelly Cassidy answered the questions and that was that,” Cosgrove said.

Rep. Margo McDermed, a Republican from Mokena, said on the House floor that Cosgrove’s comments were “offensive and yet another example of bullying and harassment.”

She demanded an apology from Cosgrove and the male legislators who were present at the news conference.

“This is a time when we talk about the importance of empowering women and acknowledge their value in leadership roles, so for Personal PAC and those Democrat male members of the General Assembly who stood with him to degrade our assistant leader’s importance as a spokesperson for our caucus is absolutely indefensible,” McDermed said. “Leader Bourne has always been one of our caucus’s most outspoken advocates for the protection of unborn life. Any attempts to diminish the credibility of her voice are appalling.”

Welch responded by clarifying Cosgrove’s comments were “not endorsed” by the lawmakers present at the news conference and apologized to Bourne.

“I can say in all respect, Leader Bourne, thank you for the way you handled yourself yesterday. … There was no one who stood this morning standing there with any intention to disrespect you,” he said. “So on behalf of us, we apologize if any of that is reflected on any of us because that was not our intent.”

“It not only was offensive to Representative Bourne personally, it also rudely ignored the heartfelt, passionate way in which Representative Bourne expressed herself in committee on Sunday evening and yesterday in the full House,” according to the statement. “She may disagree with the position embraced by Personal PAC, but she did not deserve to be subjected to such an insult.”