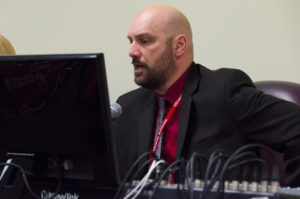 Published by the Roslyn Times and the Williston Times on April 22, 2017

The Mineola school board unanimously voted to adopt a $94.4 million budget proposed by Superintendent Michael Nagler on Thursday night, praising the plan for adding student opportunities while staying within the state property tax cap.

“This [budget plan] is important because as we grow these new programs, we need the right spaces, equipment and furniture to get their full benefit,” the school board vice president, Margaret Ballantyne-Mannion, said.

The budget increases spending about $3.2 million from the current year and increases revenue from property taxes by 0.89 percent, the maximum increase the district is allowed this year under the state’s tax cap law. Overall, salary and benefits expenses are not increasing, Nagler said.

To fund the various capital improvements outlined in the budget, $3 million from the district’s reserve funds will be moved to its capital budget, Nagler said.

A formal budget hearing will be held on Thursday, May 4 before the public vote on Tuesday, May 16. Also on the ballot is a proposition authorize the district to spend $4.2 million from the district’s capital reserve fund to pay for new classrooms at the Meadow Drive School and the second gymnasium at the high school.

The school board also voted to approve the proposed Nassau BOCES budget, which totals about $21 million. It is supported by each of Nassau County’s 56 school districts and funds employee salaries, program and supplies costs, and retiree benefits, according to a BOCES publication.

At Thursday’s meeting, Stephanie Datys, the Mineola High School PTSA corresponding secretary, said more of an effort could be made by district officials to include students with special needs in offered programs. 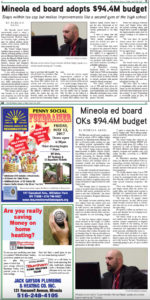 The Roslyn Times, top, and The Williston Times published this piece in print on Friday, April 28, 2017.

“I’m totally amazed when I go to PTA and hear about the wonderful work that is done for neurotypical kids, and I think that Mineola could make some strides in some special education programs,” she said.

There was dialogue between Datys and Nagler about what the district currently offers, and Nagler made a point to highlight the improvements made since he started working in the district in 1999.

“We now have 10 special classes across five schools,” he said. “We’ve pretty much brought everyone back to district, and that was not a cost savings thing. It’s the right thing.”

He agreed to follow up on Datys’ concerns and thanked her for bringing the issue to his attention.

The board voted to go into executive session after the meeting to discuss teacher contract negotiations at Nagler’s request. Earlier in the meeting, he said not much progress was made at the latest conference and negotiations will resume at the next one, scheduled for June 12.

“We have what we believe is a legitimate offer on the table based on the fact-finder’s report and what other settlements are in the country,” he said. “Something is eventually going to give, it’s just a matter of time.”