Rep. Kelly Cassidy says she’s ready whenever chairwoman lets it out of committee

Published by Capitol News Illinois on May 08, 2019 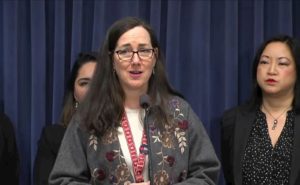 SPRINGFIELD — House Democratic legislators are the subject of an open letter penned by nearly 200 women who wrote they are “alarmed by the lack of action” on a bill that would rewrite Illinois’ abortion law.

They are pushing Democrats to “take action” on the Reproductive Health Act, legislation introduced in February that would replace the state’s abortion statute with language proponents and opponents agree would be the most liberal reproductive health care law in the country.

“Women and the vast pro-choice majority across the state cannot sit idly by and wait to see how these [U.S. Supreme Court] cases sort out and how our rights are affected in Illinois,” the authors of the letter wrote. “We urge the Democrats in the Illinois House to take action in Springfield and protect our reproductive health care choices here in Illinois.”

When sponsor Rep. Kelly Cassidy, a Chicago Democrat, announced the bill, it received much attention from backers and detractors. But the act has been sitting for more than two months in the same subcommittee as all other abortion and reproductive health care-related bills introduced this session.

“After waiting for action on the RHA in the Illinois House, we have come together to speak with one voice to demand that our leaders take action on the RHA before the end of the session,” Andi Friedman, an attorney and reproductive rights advocate who was among the signers of the letter, said in a news release.

Female voters mobilized and voted in the 2018 election, helping to give Democrats a supermajority in both chambers of the General Assembly, Friedman said. There is a growing sense the issues those voters care about are “getting left behind,” she added.

Friedman and others have said bills regarding women’s issues have not moved as quickly as they expected. That includes the Reproductive Health Act, an effort to repeal a law requiring minors to consult their parents before getting an abortion and a package of maternal mortality bills.

“This should have been one of the first changes the Legislature made out of the gate, and it befuddles me that this is stuck when they should’ve been highlighting this and using it as evidence of the change Illinois could make to show the kind of change the state could make,” Friedman said. “For an average person, it feels like politics as usual when we want to see change.”

Cassidy said female voters are “justified in feeling that way, absolutely,” and that she herself is “frankly frustrated” the act has not advanced. She said she knows how important the tenets of the Reproductive Health Act are to women in Illinois, but it is a matter of convincing others of her bill’s significance.

“I think that there’s been a failure to understand the real urgency on this issue. The cases that are in the pipeline come very close to home, and the laws that are on the books will rise like zombies at the point that Roe (v. Wade) falls,” Cassidy said. “I think people have a false sense of security around these issues, when the reality is that women are in real danger in Illinois as the result of our inaction.”

The General Assembly has largely focusd on initiatives Democratic Gov. J.B. Pritzker needs approved to make his budget work, including the legalization of recreational marijuana and sports betting, and taxes generated from plastic shopping bags and tobacco products.

“It’s one of those that with so many budgetary issues, I think it’s gone under the radar,” Sen. Melinda Bush, a Democrat from Grayslake, said. “We need to make sure we do everything we can to get the bill out of committee.”

Bush is sponsoring the act in the Senate.

“As someone who supports a lot of progressive issus, I appreciate there are a lot of things that the Legislature needs to take care of, especially after the last four years,” Friedman said. “But I hope they can walk and chew gum. It’s extremely important that the issues that affect women don’t get left behind.”

Pritzker has seemingly indicated he would sign the Reproductive Health Act if the General Assembly could get it to his desk. The governor has vowed to “make Illinois the most progressive state in the nation for access to reproductive health care.”

Cassidy said she would continue to ask the chairwoman of the House Human Services Committee, Chicago Democratic Rep. Frances Ann Hurley, for the opportunity to advance her bill.

“I am ready when they are,” Cassidy said.

Hurley controls whether bills are called for a vote in her committee. She did not return a call for comment on the open letter sent to House Democrats about the Reproductive Health Act, and it is unclear why she decided to halt the progress of all bills in her committee pertaining to reproductive health care and abortion.

Democratic Leader Gregory Harris, from Chicago, also did not return a request to comment on the letter.

The legislation is House Bill 2495 and Senate Bill 1942. The latter chamber’s version is also stuck in committee.