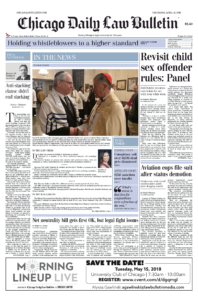 The Chicago Daily Law Bulletin published this piece in print on Thursday, April 12, 2018. The jump is below.

Published by the Chicago Daily Law Bulletin on April 12, 2018

Six members of the House Cybersecurity, Data Analytics and Information Technology Committee voted to pass the bill, two voted no and two others voted present.

The measure is one of more than 30 other efforts nationwide to codify internet protections reversed by the Federal Communications Commission in December. The body’s new ruling is scheduled to take effect on April 23.

A similar legislative effort, Senate Bill 2975, sponsored by Evanston Democrat Daniel Biss, is still waiting to be assigned to a committee. 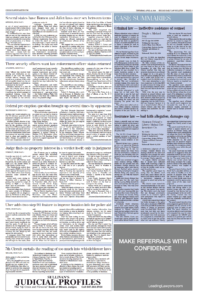 But telecommunication industry representatives warned legal challenges will follow if the bill becomes law. They pointed out about six pages of the FCC’s ruling explains that states are not permitted to create their own requirements of service providers.

“We, therefore, pre-empt any state or local measures that would effectively impose rules or requirements that we have repealed or decided to refrain from imposing in this order or that would impose more stringent requirements for any aspect of broadband service that we address in this order,” according to the Commission’s ruling.

It also mentions that “a patchwork of separate and potentially conflicting requirements” would not be supported by federal courts, which have maintained policies of deregulation as similarly pre-emptive as policies of regulation.

When Dixon Republican Tom Demmer questioned Williams about this issue, which he characterized as “a way to do backdoor regulation,” the sponsor said it is not a concern.

“We’re not challenging it in court; today, we’re asking to pass it through the legislature,” Williams said. “There’s a whole other branch of government that can make that decision, but I would submit to you that 22 attorneys general and 33 legislatures disagree and believe it is not pre-emptive.”

Khadine Bennett, director of Advocacy and Intergovernmental Affairs for the American Civil Liberties Union’s Illinois chapter, added the bill would not impose new regulations. Instead, the measure, written by her organization, would leave the previous net neutrality protections in place and mandate any policy changes be published in a “clear and conspicuous statement” on the company’s website.

“What we have the capacity to do as a state is to say that we want to be able to contract in whatever way we want to,” she said. “Our bill does not require companies to do anything except disclose.”

But Matthew Brill, who represented several industry members and testified before the FCC when it was considering whether to remove the net neutrality guidelines, disagreed. A partner Latham & Watkins LLP’s Washington office, he cited two U.S. Supreme Court opinions he argued supersede Illinois’ standing.

The first, Wisconsin Department of Industry v. Gould Inc., held that a Wisconsin statute which prevented the state from doing business with an entity that violated the National Labor Relations Act three times within five years was pre-empted by the NLRA itself.

“Although state action in the nature of “market participation” is not subject to the restrictions placed on state regulatory power by the commerce clause, Wisconsin[,] by prohibiting state purchases from repeat labor law violators is not functioning as a private purchaser; its debarment scheme is tantamount to regulation,” according to the 1986 opinion.

The other is a case from 2008 that challenged the same act. In Chamber of Commerce of United States v. Brown, the chamber challenged a California law that in part prevented organizations that received at least $10,000 in state funds from using it to “assist, promote or deter union organizing.”

“This issue has been decided at the U.S. Supreme Court level and at several courts of appeals and it’s really a settled question of law,” Brill said.