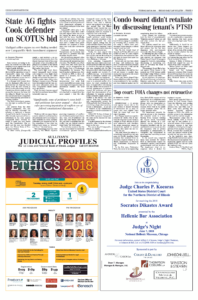 The Chicago Daily Law Bulletin published this piece in print on Tuesday, May 29, 2018. The jump is below.

Published by the Chicago Daily Law Bulletin on May 29, 2018

SPRINGFIELD — A government agency cannot rely on the new version of Illinois’ Freedom of Information Act to deny requests that were eligible when filed, the state’s high court decided Thursday.

In a 26-page unanimous opinion authored by Justice Rita B. Garman, the Supreme Court ruled the changes to FOIA effective in 2015 were substantive and, therefore, the added exemptions cannot be retroactively applied to records requests filed under the old version of the act.

The court issued its ruling in a consolidated appeal from two separate 1st District Appellate Court decisions that stemmed from information requests denied by the Illinois Department of Financial and Professional Regulation in 2013.

In the first case, Christopher Perry, the owner of an engineering firm, filed a FOIA request with the department for a complaint made against his structural engineer’s license. After the department refused to honor the information request, Perry went to the public access counselor within the attorney general’s office. 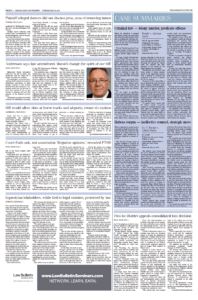 The jump is in the right column below the fold.

The department properly denied his access to the complaint, the counselor wrote in a nonbinding letter, because fulfilling the request would “unavoidably disclose the identity of a confidential source, confidential information furnished only by the confidential source or persons who file complaints with or provide information to administrative, investigative, law enforcement or penal agencies,” according to court documents.

In the second case, nonprofit think tank Institute for Justice filed an information request for complaints against state-licensed cosmetologists and hair braiders. The department cited six exemptions when it denied the institute’s request.

Both parties appealed their rejections in Cook County Circuit Court the following year, seeking access to the documents and attorneys fees. And while each of those cases were pending, the General Assembly approved changes to FOIA that newly restricted access to the information Perry and the institute sought.

Then-Associate Judge Rita M. Novak initially ruled in Perry’s case that he was entitled to a redacted version of the complaint document because it had been available to a third party through a previous FOIA request. On appeal, Novak reversed her decision because the updated version of the records law had gone into effect.

Justices Mary K. Rochford and Joy V. Cunningham similarly wrote in their opinion in both cases that the new version of FOIA was applicable in both cases.

In his dissent, Justice Mathias W. Delort warned the ruling “would encourage governmental bodies to stall FOIA requests” and “actively lobby for an amendment which shields particularly embarrassing records from disclosure,” according to court documents.

On Thursday, the Supreme Court sided with the institute and Perry, overturning the 1st District’s decisions holding the older version of FOIA applied to both parties’ requests.

Garman dedicated about four pages of the opinion to explain the state’s “retroactivity jurisprudence, which parties still appear to be confused by, understandably, given its convoluted and muddled evolution.”

Given this determination, according to the high court’s opinion, the state and federal cases cited by the department involve a level of analysis that Illinois courts do not reach.

“A lack of retroactive impact in a pending case does not somehow negate or trump the legislature’s intent that a change of law is to be applied to future cases only,” Garman wrote. “In sum, the [d]epartment is arguing for an ‘impact-before-intent’ analytical approach that no longer finds support in Illinois law.”

Gregory F. Ladle, Perry’s representative before the high court, said this clarification of Illinois’ retroactivity analysis is “key to creating uniformity, which I think affects a lot of cases.”

The court also briefly addressed a point raised by Justice Robert R. Thomas in oral arguments. He posed a question to the institute’s attorney, Kirkland & Ellis litigation partner Jeffery Lula, about whether the court could require a public official to comply with a repealed or changed law.

Garman wrote this ruling did not “impermissibly order a public officer to disclose documents which the legislature had dubbed confidential.” Instead, the decision reaffirms the court’s procedure of interpreting legislative intent.

“The system that was in place prior to this ruling was one that allowed public bodies to set up this loophole trap in our legal system,” Lula said in an interview after the state’s highest court released its opinion. “This is especially true where a party would ask for politically sensitive information a government official may be particularly motivated to try and petition the legislature to tweak a law to protect themselves.”

The institute was awarded the documents originally sought through its FOIA request.

The decision also clarifies that Perry is entitled to the documents originally secured in the first trial, but the case will return to the circuit court to further decide whether he can receive one additional document if it is redacted and attorney fees.

The court also needs to determine if the department should be penalized for willfully refusing access to information.

The state was represented during oral arguments by Assistant Attorney General Aaron Talen Dozeman. A spokeswoman declined to comment on the high court’s ruling.

The case is Christopher J. Perry, et al., vs. The Department of Financial and Professional Regulation, No. 122349.