North Shore residents have got to catch em’ all 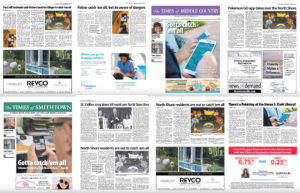 The latest trend sweeping the nation is a throwback from the 1990s with a modern-technology twist: a augmented reality Pokémon game played on smartphones, and residents of the north shore are not immune. Hundreds of kids, teenagers and adults alike took to the streets this week to interact in this new game.

This latest offering from Pokémon evolved the franchise beyond the original cards, television show and video games. Pokémon GO allows players to create an avatar, called a trainer, and walk around their neighborhoods catching various Pokémon. Players can battle one another and get free in-game items from locations chosen by the game.

The game is getting people of all ages out of their houses and into their neighborhoods. The only way to catch Pokémon is to walk around searching for them, and players have been posting on social media about how far they have traveled around their neighborhood.

One 22-year-old Greenlawn resident said she saw more than 50 kids hunting for Pokémon at parks in Northport and Huntington in one afternoon.

Megan McLafferty introduced the game to two kids she babysits because she thought, “it would be a fun activity to do outside with the kids — and they loved it.”

“I like that it gets you outside, it gets you moving, and it gets you to interact with other people,” she said in an interview. “It seemed like a lot of people were in big groups together [searching for Pokémon].”

Gerard Anthony, an 18-year-old Northport resident agreed that Pokémon GO is a great game to play in groups.

“Seeing all these people in my town is so new and great, especially when we can all bond over the same thing,” Anthony said in an interview. “I am able to go into Northport by myself and meet a new group of people each day.”

The only way to catch Pokémon is to walk around searching for them, and similarly, the only way to get a refill of free in-game item, like pokéballs is to go to Pokéstops.

One of those stops is the Emma S. Clark Memorial Library in East Setauket. Director Ted Gutmann said once he discovered this, he had to try it. “I caught a few in my office,” he said. “So they’re here!”

The library is busy this time of year because of its summer reading program, but Gutmann said being a Pokéstop is attracting more visitors than usual.

“The hope is, once they get in here, they’ll stop and read a book or attend one of our programs,” he said.

Gutman added that the library had tried its hand at augmented reality a while ago, implementing the technology in its newsletter. It abandoned the effort because it was not getting enough use at the time, but now that Pokémon GO is increasing the popularity of augmented reality, he said the library may revisit the project.

“There are lots of opportunities to use the technology beyond the game,” he said.

Port Jefferson’s Main Street is also a huge attraction for players. With a multitude of Pokéstops and gyms, the promise of Port Jefferson tempted Chris Aguilar, 23, to travel from Riverhead two days in a row.

Aguilar said there were so many people in the streets on the first night he was in the area, July 13, that mobs of trainers were crossing the streets. They did not begin to clear out until about 2:30 a.m.

“This game is bringing people together in an unprecedented way,” he said. “It’s like an age gap doesn’t exist between players,” who can speak to each other on almost an equal level about the game and trade tips.

Other local hotspots to catch Pokémon include Heritage Park in Mount Sinai and Sylvan Ave. Park in Miller Place.

Just two days after the game’s release, players were spending an average of 43 minutes and 23 seconds per day playing Pokémon GO, a higher rate than popular apps including Instagram, Snapchat and Whatsapp.

According to SimilarWeb, an information technology company that tracks web analytics, Pokémon GO has so many daily active users that it is projected to soon have more users than Twitter.

But some people are concerned about the safety risks associated with Pokémon GO.

Pedestrians are now wandering around towns, with their eyes faced down at their smartphones. Law enforcement agencies, institutions of higher education and public transportation systems have spoken of the dangers of walking around consumed by a smartphone.

“The safety and well-being of our residents, especially children, is our highest priority,” he said in a statement.

“There have also been accounts of people using the application while driving,” Sini said. “We are encouraging not just parents, but all users, to practice caution to avoid injury to self and others.”

Stony Brook University also contributed to the conversation, reminding students to watch where they are walking while playing.

Mark Szkolnicki, a student of the university, said that he is always careful.

“I grew up in a bad area, so the whole mugging-for-phones thing has been something that I’ve been cautious of forever,” he said. “But I worry for the youth because it’s a cool concept and it could really grow, but those kinds of obstacles really put a downer on the whole gaming community.”

Stony Brook Office for Marine Sciences Secretary Christina Fink agreed. She said it is important to keep in mind that if players are going hunting for Pokémon at night, they should go with at least one other person.