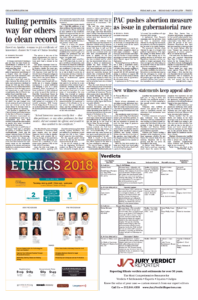 The Chicago Daily Law Bulletin published this piece in print on Friday, May 11, 2018. The jump is below.

Published by the Chicago Daily Law Bulletin on May 11, 2018

SPRINGFIELD — House Bill 40, which allows tax dollars to be used on abortions, re-emerged this week as a sticking point in the state’s gubernatorial race.

A pro-reproductive rights political action committee called on both major candidates — Republican Gov. Bruce Rauner and Democrat J.B. Pritzker — to sign a pledge promising to preserve the measure, which Rauner signed into law in September.

“If elected [g]overnor on November 6, 2018, I, [candidate name], pledge that I will not sign any legislation that repeals, modifies or in any way diminishes HB 40. I support HB 40 100 [percent] and pledge to continue to support HB 40 as the law of the [s]tate of Illinois for my entire term as [g]overnor,” the document states.

A spokeswoman for Pritzker said “of course” the candidate will sign Personal PAC’s pledge. 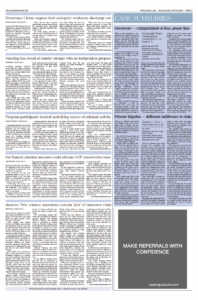 A spokesman from Rauner’s campaign said the governor does not have a statement about whether he will sign the document, but pointed to the fact he signed the law as proof of his public position.

The governor’s decision about whether to sign it is fraught with political repercussions. If he signs the pledge, he risks further alienating his base leading up to the general election in November and Republican lawmakers as they negotiate a budget agreement. If he does not sign it, he risks losing out on moderate votes he may need to secure his re-election.

Rauner campaigned in 2014 as a pro-choice candidate, but when the bill arrived on his desk last year, he told his colleagues he would not sign it into law. When he changed his position again and signed it, he received criticism from conservative lawmakers and constituents.

State Rep. Jeanne Ives, a Wheaton Republican, campaigned for her party’s gubernatorial nomination — in part by blasting Rauner’s conservative bona fides — and received 48 percent of the votes. Plainview Republican Sen. Sam McCann launched a third-party bid for the state’s highest office because “Rauner has smeared the reputations of proven conservatives,” he said in mid-April.

And soon after the measure became law, Lombard Republican Rep. Peter C. Breen, a senior attorney for the Thomas More Society, filed a lawsuit challenging the legality of using Medicaid funds to pay for abortion procedures.

Breen made two main arguments against House Bill 40 in court filings — first, that the General Assembly did not estimate the legislation’s cost to taxpayers or appropriate money to cover that cost, and second, that the law should not have gone into effect at the beginning of this year because constitutional requirements were not taken into account.

Oral arguments for the case, Springfield Right to Life, et al. v. Norwood, Felicia, et al. (No. 4-18-0005), are scheduled for June 13. Breen could not be reached for comment on the lawsuit.

Additionally, three other measures were introduced in the General Assembly in an attempt to repeal the law, all of which are stuck in committee.

Rauner’s approval of House Bill 40 fulfilled a campaign promise both he and his wife made to voters. Diana Rauner signed a letter published as a political advertisement touting her husband’s support for “reproductive rights” and characterized the only difference between him and Democratic incumbent Patrick J. Quinn as whether parents should be notified of the woman’s choice.

And in April 2014, Rauner filled out a questionnaire distributed by the same group asking him to sign the pledge. In it, he indicated his support for several reproductive health and abortion protections, including a requirement for health professionals to provide accurate information about medical options, a mandate that health insurance plans cover contraception products and a guarantee to veto legislation aiming to make nearly all abortions illegal.

He also signaled he would support a restoration of abortion coverage under Illinois’ Medicaid plan.

“My highest priority in this area will be to ensure effective administration of the laws regarding access to contraception and provide that access regardless of income. I dislike the Illinois law that restricts abortion coverage under the state’s Medicaid plan and state employees’ health insurance because I believe it unfairly restricts access based on income,” Rauner wrote in the questionnaire. “I would support a legislative effort to reverse the law.”

Terry Cosgrove, president and CEO of Personal PAC, said at a news conference Thursday that the pledge is an important symbol in the upcoming gubernatorial election.

“This signed pledge will assure Personal PAC and the overwhelmingly pro-choice majority across Illinois that we, and the press, will have a vehicle to hold the next governor of Illinois accountable, in writing, to protecting HB 40 until January 2023,” he said.

The group mailed the document to both candidates Thursday and asked that it be returned no later than June 22.