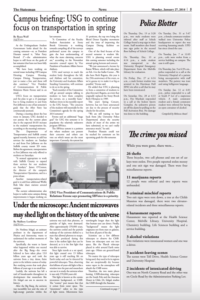 On Thursday, Dec. 19, a male student was transported to the University Hospital Emergency Department from the Melville Library for evaluation.

On Friday, Dec. 27, a male former student was arrested in the Harriman Hall SINC site after a call that he may have been intoxicated.

On Saturday, Dec. 28, Fire Marshals responded to a call at the Indoor Sports Complex. An unknown person set off the alarm by pulling on the Pull Activation Box. No damage was done to the building.

On Tuesday, Dec. 31, a female commuter student walked into University Police headquarters to report she was receiving harassing emails. UPD has since closed the case.

On Tuesday, Jan. 7, coils were stolen from a service building on campus. The case is still open.

On Thursday, Jan. 9, police responded to a call at the University Hospital of a patient being uncooperative with staff members. The patient was irate and using belligerent language.

While you were gone, there were…

Three bicycles, two cell phones and one set of car keys were stolen. Five people reported stolen money and one exit sign was damaged. There were four miscellaneous reports.

12 people were referred and two reports were unfounded.

Two exit signs were torn down, a tree at the Childs Mansion was damaged, there were two elevator-related incidents and three miscellaneous reports.

Two violations were intoxicated women and one was a driver.

One was on North Country Road and the other was on Circle Road by the Administration Parking Lot.