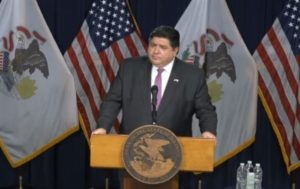 Laboratory personnel processed more than 10,000 tests per day for the past week, exceeding Gov. J.B. Pritzker’s long-stated goal in order to provide a clear picture of the novel coronavirus pandemic’s impact on the state.

Beginning Friday, the governor’s new executive order will ease a number of restrictions put in place over the past two months.

Retail stores can begin taking online orders and offering pick-up services, state parks and golf courses can reopen and elective surgeries can be scheduled. All reintroduced actions are subject to social distancing and other guidance issued by the Illinois Department of Public Health.

Also, adults, children over the age of 2 and all other residents medically able to wear a face covering must do so in places social distancing is not possible starting Friday.

“All these changes present a shift in our approach to COVID-19, a shift made possible by the millions of Illinoisans who have stepped up by staying home and keeping each other safe,” Pritzker said Thursday at his daily coronavirus briefing in Chicago.

His new order, he added, takes into account “that different areas of the state require different rules during this time.” Elective surgeries, for example, are “much more available” in areas of Illinois outside the Chicago metropolitan area.

The state is “staying the course of making sure that we’re keeping an eye on the health and safety of every Illinoisan, wherever they live,” the governor said.

While the order does not ease restrictions for religious gatherings, one congregation on Thursday filed a lawsuit against the governor and others and said it planned to host services this weekend.

The Beloved Church in Lena alleges the state breached its First Amendment right to practice religion.

Pritzker said this religious institution is “a bit of an outlier,” because many faith leaders across Illinois have found “new ways” to connect with their parishioners.

“Nobody is going to run in and break up a gathering of church goers at that moment, but I will tell you that there are consequences, of course,” Pritzker said. “The state has the ability to enforce orders. But we’ve been looking to people to do the right thing and they should do the right thing, and I think the parishioners, by the way, ought to do the right thing and ask those who are faith leaders, either not to hold those services or simply ask that they have something online.”

He added those who attend the services might infect others.

“We know that there are many, many people out there that are pre-symptomatic, asymptomatic and yet have coronavirus,” he said. “So if you put one of those people in a room full of parishioners, you run the risk that you’re going to get a kind of exponential run of this disease, of this infection rather, through a crowd of people that you love and care for.”

IDPH Director Dr. Ngozi Ezike said 13,200 tests were analyzed by personnel at public and private labs Wednesday. They were able to do so because officials “aggressively” assembled the means to amass test processing materials.

Those officials did so “with limited assistance from the federal government,” the governor said.

State workers also partnered with hospitals and community health centers to increase free testing sites in Illinois. Today, there are 177 such locations across the state. Last Friday, there were 112.

Those locations can be found on the state’s website, DPH.Illinois.gov/testing.

The number of drive-thru testing sites are also growing, up to seven across Illinois. The two new locations are in Waukegan and East St. Louis, and will open next week.

Pritzker also addressed his actions regarding the prison population. He said most inmates recently released from prisons had a few months left on their sentence and were given credit for “good time.” Lessening the number of inmates in jails and prisons is a good health policy, he added.

And those inmates who were granted clemency by the governor had to go through the Prisoner Review Board’s process, Pritzker said. Board members review cases, hold hearings and make recommendations to him.