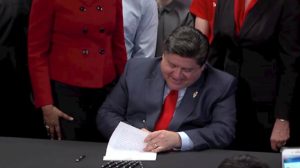 Gov. J.B. Pritzker on Sunday signs into law a bill that raises to 21 the minimum age people can legally buy tobacco products in Illinois. Pritzker signed the legislation at the Mile Square Health Center in Chicago. (Screen shot from BlueRoomStream)

The ceremony marks the end of a four-year effort to change the age from 18 to 21 to buy cigarettes, e-cigarettes, vapes, chewing tobacco and other goods containing nicotine.

Surrounded by lawmakers and advocates, Pritzker said he was “proud” to endorse such a “common sense” initiative.

“All of you are heroes,” the governor said to the assembled supporters, who had worked to bring the legislation to his desk. “On behalf of our young people, thank you.”

Nearly 95 percent of adult smokers begin using cigarettes before the age of 21, according to the American Lung Association. “Tobacco 21” proponents say keeping nicotine products out of the hands of young people can prevent them from ever using them.

The bill’s House sponsor, Chicago Democratic Rep. Camille Lilly, said the real focus is to make sure 18-year-olds are not the suppliers of cigarettes and other tobacco products for kids aged 14 to 17.

“The 101st General Assembly is saving lives today,” she said. “It really took all of us to get this passed, and the experience was rewarding.”

Historically, the initiative has succeeded in the Senate chamber only to die in Lilly’s chamber. This session, proponents tried a different approach — running the measure through the House first, where there are more legislators to win over.

“In the past, Tobacco 21 has been a partisan issue, a Democratic issue. It isn’t anymore,” House Minority Leader Jim Durkin, from Western Springs, said. “I was glad to not only support the bill, to make comments on the floor of the House of Representatives, but secure a good number of Republican votes to ensure its passage. That was the right thing to do as a legislator, but also as a parent.”

Former Republican Gov. Bruce Rauner vetoed Tobacco 21 in the previous session. In his message to lawmakers, he agreed smoking is “detrimental” to Illinoisans’ health, but said that raising the age to purchase cigarettes would cause unintended economic consequences.

Because Illinois would become the first Midwestern state with such a law, Rauner wrote, it would “push residents to buy tobacco products from non-licensed vendors or in neighboring states.”

At the signing ceremony Sunday, Pritzker seemed to respond to the former governor’s criticism.

“This is about the health of our youth and the longevity of our citizens,” he said, “and if there are young people who will travel over state lines to buy tobacco products because they can legally buy them there, then I urge the surrounding states to pass ‘Tobacco 21,’ too.”

Emanuel made reaching a tobacco-free generation in Chicago one of his administration’s priorities. It used to be “aspirational,” he said. Now, “it’s actually within reach.”