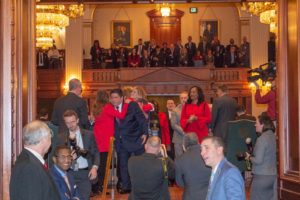 But that would require a constitutional amendment, a lengthy process which, even if approved, would not make any new money available to the state until the 2021-2022 budget year.

So for the upcoming fiscal year, which begins July 1, Pritzker outlined a proposed $38.7 billion state budget that would increase spending on education, human services and public safety. But it also relies heavily on new revenues to pay for new expenses, and increased borrowing to pay down a backlog of past-due bills and future pension liabilities.

Speaking to a joint session of the General Assembly, the Democratic governor called his budget plan for the upcoming fiscal year “a bridge to a stable fiscal future” that would enable the state to begin crawling out of its financial hole while maintaining funding for critical public services.

But he also said restoring fiscal stability would take a number of years, reiterating his call for a graduated income tax to accomplish that.

“Make no bones about it, I choose to stand up for working families and will lead the charge to finally enact a fair tax system in Illinois,” Pritzker said.

“Amid the challenges we heard spelled out today, we also heard that we now have a governor who recognizes the magnitude of these challenges and will work with us to address them,” House Speaker Mike Madigan (D-Chicago) said in a statement. “House Democrats stand ready to work with Governor Pritzker and our Republican colleagues, bring all options to the table for honest negotiation, make the tough decisions, continue to stand strong and protect critical human services and quality schools, and move Illinois forward.”

Senate Republican Leader Bill Brady of Bloomington, on the other hand, called Pritzker’s plan, “a starting point for negotiations.”

“We heard a lot in his speech about more spending, more tax increases and concepts tried in the past” Brady said in a statement. “And while we as legislators now begin digging into the details, I have grave concerns about the pension plan and I remain opposed to a graduated income tax.”

The evidence-based funding formula approved last session will see an added $375 million, $25 million more than the $350 million increase written into the law. The added money is first directed at the highest-need districts.

Early intervention programming would see a $7 million increase, and the federal preschool birth-5 grant will be allotted $3.8 billion.

Mark Jontry, president of the Illinois Association of Regional Superintendents, said the group was pleased to see more money invested in education, but will emphasize alternative education going forward.

“I think we’re a little disappointed that we’re flat-funded with our alternative programs,” he said. “We’re going to want to continue to have conversations with the governor’s office around trying to put additional dollars into those programs, because it is a population with some real needs and we’ve been held level while our costs to serve those kids continue to escalate.”

“We are grateful that Gov. Pritzker made education a priority in his budget proposal, including a funding increase for public universities and new dollars for MAP grants,” said Tim Killeen, president of the University of Illinois System. “We hope the Legislature adopts his spending plan, and approves funding to support our growing enrollment, our ongoing efforts to hold down student costs, and our push to provide the workforce and innovation that are essential to move Illinois forward.”

The Monetary Award Program, which provides grants which do not need to be repaid if an Illinois student attends select state colleges or universities, will receive an additional $50 million in funding. The AIM High program, which aims to keep Illinois’s brightest students in the state for college through grant funding, will receive $35 million in the second year of the pilot program.

Funding for POW/MIA scholarships, which have not been funded since 2009, is also restored in the bill at a cost of $3.5 million.

The second-largest area of increased spending in Pritzker’s budget plan is the Department of Human Services, which would see a boost of $542 million, or 9.2 percent.

Included in that is $103 million for increased funding for home services that allow people with severe disabilities to continue living independently. It also includes $107 million to pay for higher minimum wage expenses for certain workers.

But it also expands the Child Care Assistance Program by raising the eligibility limit to 200 percent of the federal poverty level, or $49,080 for a family of three, which would cost $30 million. And it includes an additional $31 million to fund 700 new placements for people with developmental disabilities to transition into less restrictive environments.

“This is less than what I would like to do. But it is what we can afford to do in year one of our recovery,” Pritzker said.

Meanwhile, Pritzker is proposing to reduce general revenue spending on Medicaid by about $700 million. That reduction would be offset by a new tax levied on managed care organizations, including those that administer the Medicaid program. Revenue from that tax would then be put into a fund that could be used to draw down additional federal Medicaid matching dollars.

In order to accomplish all that, Pritzker is asking for an additional $1.1 billion in new revenues. Those would include, among other things, a 32-cent per-pack increase in cigarette taxes, a new 36.5 percent tax on e-cigarettes, and imposing a new tax on plastic shopping bags of either five or seven cents per bag.

Also in Pritzker’s budget plan is about $170 million that could come from licensing fees generated by the legalization of recreational marijuana; another $212 million from legalizing sports wagering, which the United States Supreme Court said last year states could do; and changing the state’s corporate tax code in order to capture full taxes of about $94 million on assets brought back to the United States from overseas as a result of the 2017 federal tax reform law.

Pritzker is also asking for authority to issue $4.5 billion in new bonded indebtedness next year for pension costs and paying down the backlog of unpaid bills.

That includes the $2 billion in “pension obligation bonds” he has already discussed, money that would give the pension funds an immediate infusion of cash. It also includes $1 billion to fund more early retirement buyouts, a program that he is proposing to make permanent; and $1.5 billion for the unpaid bill backlog.

Senior budget officials said Wednesday that each of those proposed bond issues would save the state money in the long run because the interest on the bonds would be less than the interest the state is paying on late bills, or the earnings that the bond proceeds would generate after being invested in the pension funds.

The governor’s budget proposal is only the first step in a long legislative process that will lead to a final budget that Pritzker and lawmakers will hammer out by the end of the session, and the final plan could look very different from the one Pritzker outlined Wednesday.

“Undoubtedly all of you will bring your own priorities, ideas, and concerns to the budget process,” Pritzker said. “I welcome that conversation – that’s as it should be. We are all here, Democrats and Republicans, with the common desire to serve the people of our state well. And we do that better when we talk to each other, and more importantly, listen to each other.”