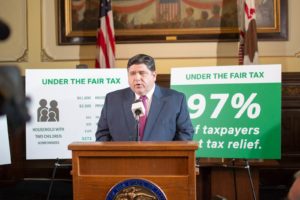 SPRINGFIELD — Democratic Gov. J.B. Pritzker framed Illinois’ $3.2 billion structural budget deficit as having three possible solutions Thursday: a 15 percent across-the-board cut to state spending, including education; a 20 percent income tax increase on every Illinoisan; or his preferred solution of a graduated income tax structure, which he claims will lower taxes on 97 percent of Illinoisans.

At a press conference in his office, Pritzker laid out the first public rate structure for the graduated income tax, which was a frequent talking point of his successful gubernatorial campaign. He detailed a proposal to lower rates for earners pulling in less than $250,000 while raising an estimated $3.4 billion in added revenue by hiking up the rate on income over $250,000.

“People like me should pay more, and people like you should pay less,” Pritzker, whose net worth is estimated at $3.2 billion, told a room full of reporters.

Ultimately it would be up to the voters as to whether the graduated tax structure can become law. If three-fifths of the General Assembly votes to put the proposed constitutional amendment on a ballot, the public will have a chance to vote on the measure in November 2020.

If a majority of those voting in the election, or 60 percent of those voting on the question, want a graduated tax, the Legislature will then have the authority to implement Pritzker’s proposed rates or ones of its choosing.

Opponents said if the voters approve the amendment to change Illinois’ flat tax — which is currently 4.95 percent — there’s no telling whether the rate structure remains favorable to middle-class earners in the future.

“The General Assembly, with support from Governor Pritzker, would further increase the tax rates in the future,” Rep. David McSweeney, R-Barrington Hills, said. “You would really have to trust Governor Pritzker and Illinois politicians to set ‘fair tax rates,’ which I don’t.”

Pritzker’s current proposed rates would range from 4.75 to 7.95 percent, and anyone making less than $250,000 per year would see their taxes decrease under the plan. The details came in an 8-page packet containing the basics of his proposal, which is not yet on file as official legislation.

According to the plan, that means taxpayers in those brackets would pay a lower rate than Illinois’ current 4.95 percent rate which applies to every penny of income.

But it’s the plan for the highest bracket that led Illinois Chamber of Commerce President Todd Maisch to call the plan a “millionaire’s tax,” which he said will drive high-income earners out of the state: When an earner hits $1 million of income, every penny they bring in would be taxed at a 7.95 percent rate.

“There’s always a need for more money, especially when you think about the fact that you’re squeezing more than $3.4 billion out of those high earners, how many are going to stick around to pay that tab?” Maisch said. “That tab then has to get pushed down the scale and we see it in other states. It always starts out as a millionaire’s tax, always ends up a tax on the middle class.”

Maisch said it’s difficult to analyze the measure via an eight-page presentation. He said to promote transparency, he wants to see language passed in both houses and held on the governor’s desk before a constitutional amendment is brought to voters.

“They would love to pass the concept in a constitutional amendment and then figure it out later once they’re off the hook,” he said. “I think, let’s go ahead and see this plan in a bill, let’s see it introduced and let’s see the supporters, if they can muster the votes, pass it.”

The Illinois House Republican caucus has unanimously signed onto a non-binding resolution opposing the tax and saying there’s “no need to negotiate” between the caucuses.

Senate Republican Leader Bill Brady, of Bloomington, said in a statement “without guaranteed protections for middle class families,” his caucus would be opposed to the “$3.4 billion tax increase” as well.

Tim Schneider, chairman of the state’s Republican Party, said in a statement the bill will lead to “even more out-migration.”

“Tax-and-spend Illinois Democrats cannot be trusted with more of our tax dollars,” Schneider said. “That is why Illinois Republicans stand united against the Pritzker-Madigan tax hike and will continue to support reforms that will lower taxes, create jobs, and make our state thrive once again.”

But Pritzker said bond markets and potential residents need to know Illinois is on a path to stability if they are going to do business in the state, and the graduated tax would put Illinois on that path.

“The state’s been operating at a multi-billion dollar structural deficit that has a tremendously destabilizing effect on our state’s economy, on our businesses, our jobs, and the future of working families,” he said. “I don’t know anyone in Illinois that thinks we can any longer whistle past the graveyard and ignore the fiscal challenges that we face.”

While Pritzker is framing the graduated tax as a solution to the state’s structural deficit, a release from the dark money conservative think tank Illinois Policy said actual revenues could be about $2 billion less than Pritzker is claiming, and it could prove detrimental to small businesses.

While Pritzker said the “fair tax” is necessary for Illinois families, the corporate tax rate will remain flat, with a 7.95 percent rate applying across the board. That’s a .95 percent increase from the current rate.

Think Big Illinois, a progressive interest group that is partially funded by Pritzker but whose donor list is not otherwise currently public, said “false attacks from those whose bottom lines will be hurt by a fair tax will undoubtedly continue.”

Pritzker said his proposal would also increase the state’s current property tax credit from 5 percent to 6 percent and include a per-child tax credit of up to $100 for an individual making $80,000 or less or joint-filing family making $100,000 or less.

Rebecca Anzel contributed to this report.