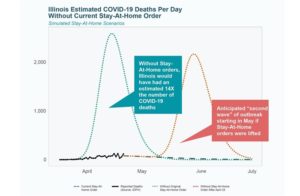 SPRINGFIELD — Gov. J.B. Pritzker said Thursday that Illinois’ novel coronavirus data necessitated an extension of his stay-at-home order through the end of May.

The current executive order will expire May 1, at which time an order with “some modifications” will take effect.

Masks will be mandatory for all residents above the age of 2, who can “medically tolerate a face covering,” when in a public place, the governor said.

State parks will begin to open, although social distancing measures must be obeyed in them.

Retail stores not currently deemed “essential businesses” will be allowed to take customer orders online or over the phone and can fulfill them by delivery or pick-up.

New social distancing guidance is planned for essential businesses as well, which also in May must adhere to a new cap on customers allowed inside at one time.

Illinoisans forced to postpone surgeries and tests so hospitals could increase capacity for COVID-19 patients will be able to begin rescheduling some of them. Both Pritzker and Illinois Department of Public Health Director Dr. Ngozi Ezike declined to specify which procedures are still under a moratorium.

Before health care centers can begin performing surgeries, their officials must meet the state health department’s “exact specifications,” Pritzker said. Hospitals must have enough personal protective gear and ensure bed capacity is sufficient to handle new COVID-19 patients. Potential procedure recipients must also be proven to not have the virus.

“I know that even with these changes, this stay-at-home order leaves many restrictions in place and in the coming weeks, as we get to the point of working our way down the other side of the peak, there will be more to do to get people back to work and open up even more,” Pritzker said.

“Understand that these are not choices that are made arbitrarily,” he added. “These changes are what data says we can offer the people of Illinois without risking so much viral transmission that our hospitals will again become or potentially become overrun.”

The governor warned March and April’s restrictions will be implemented again if residents are found to be “breaking the rules.”

IDPH reported the state has 36,934 confirmed cases of COVID-19, up by 1,826 from Wednesday as 8,970 test results were reported in the past 24 hours – the second-largest single-day increase. The virus has been confirmed in 96 of Illinois’ 102 counties.

An additional 123 lives were lost in 14 counties over a 24-hour period as well, bringing the state’s total fatalities to 1,688.

That data is only one resource Pritzker said he consults when making novel coronavirus-related decisions. He also checks the number of Illinoisans who are hospitalized, in an intensive care unit and on a ventilator.

All that information is compiled by a “cohort” of experts recruited to serve in the state’s modeling group, the governor said. The group is tasked with analyzing daily statistics and developing a projection for how many new cases and deaths will occur in Illinois over time.

Pritzker said he uses more than one model, each of which changes as new data is collected, to arrive at the best decision. They become more accurate over time.

“There is no crystal ball available to us — there are only estimates,” the governor said. “…A model is an imperfect tool that we use to add context to the actual numbers that we can chart every day — cases, fatalities, hospitalizations, positive test results, ventilator and ICU usage.”

Developing a projection is also difficult, said Nigel Goldenfeld, a professor at the University of Illinois at Urbana-Champaign and director of the National Aeronautics and Space Administration’s Astrobiology Institute for Universal Biology.

Early projections predicted Illinois’ COVID-19 peak — the greatest number of confirmed cases and virus-related deaths — would occur in April. New models now show that peak is more likely to be a plateau of deaths per day between late April and early May, which is why Pritzker said he is extending the stay-at-home and social distancing orders.

The governor added that as a public official, it is important for him to use the “worst end of the model range” during a public health crisis.

“A pushing out of our estimated peak is a natural consequence, and the best indicator, that we are flattening the curve,” Pritzker said. “…Pushing the peak further down the line might not sound like good news, but I promise you, it saved lives.”

Illinois’ reopening will come in phases, Pritzker said, and his administration is finalizing the terms for the next step. He did not disclose details on Thursday of what that might look like, saying that new data can change the circumstances officials are currently expecting.

According to data shared by Ezike, the state’s hospital bed capacity has increased slowly and been able to “maintain relatively stable levels. There were 4,877 COVID-19 patients in Illinois hospitals as of Wednesday. Of those, 1,268 were in the intensive care unit and 766 were using ventilators. Twenty-nine percent of the state’s ICU beds, 34 percent of total hospital beds and 59 percent of ventilators were available statewide.

In a Thursday letter to Pritzker, House Minority Leader Jim Durkin, R-Western Springs, asked for several concessions to be made in May.

Many of those listed — including allowance of non-essential surgeries and other medical procedures, access to state parks and retail stores to reopen — were announced by the governor in his daily COVID-19 update as definite actions.

Durkin said those additions to May’s stay-at-home order are “the first step in moving Illinois forward” in a statement issued after the governor’s daily briefing.

Senate Minority Leader Bill Brady, R-Bloomington, said in a statement his caucus submitted related recommendations and that he was “pleased” to see them reflected in Pritzker’s plans.

One thing he wanted to achieve which was not included is a “regional, phased-in reopening,” Brady said.

“Downstate communities, while following the proper social distancing guidelines, are not seeing the same number of cases, but they’re suffering just the same economically,” he wrote.

Durkin also requested the governor’s office to share the “scientific modeling and supporting documents” decisions are based upon.

“These orders have long-lasting effects on the people and businesses of Illinois, and it is only fair to publicly share the modeling that is being used to determine these critical decisions,” he wrote. “While we all know that modeling can change, the legislative branch, our residents and business owners deserve to know what the administration is using in its decision-making process.”

Pritzker, in a response to a reporter’s question about whether he would do so, said models are not his only source of information. He later added that the data in the models belongs to the universities and academic experts that created them.

“This isn’t the only thing I’m looking at, so the idea that somehow sharing one model with people is going to somehow instruct them about what next moves we’re going to make is, I think, a fallacy,” he said.