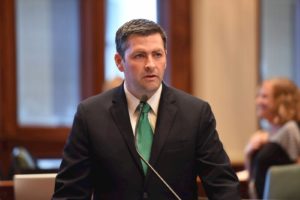 Former state Rep. Peter Breen, shown here on the House floor in Springfield, is now vice president and senior counsel for The Thomas More Society. The conservative pro-life law firm on Friday released a 13-page report pointing out its opposition to legislation that would repeal and replace current abortion law in Illinois. (Photo from reppeterbreen.org)

SPRINGFIELD — Democratic Gov. J.B. Pritzker vowed to make Illinois “the most progressive state in the nation for access to reproductive health care,” and a conservative pro-life law firm based in Chicago agrees that will happen if Democratic-sponsored legislation becomes law.

The Thomas More Society released a 13-page report Friday outlining legal arguments detailing why the Reproductive Health Act, as the measure is named, would greatly expand access to reproductive health care beyond what Supreme Court precedent has dictated.

Peter Breen, vice president and senior counsel for the Society, said in a news release that should this legislation be successful, “Pritzker and his Democratic supermajorities would convert the ‘Land of Lincoln’ into the ‘Abortion Capital of America.’”

Breen is a former state representative from Lombard, and was the minority floor leader in the previous session.

According to the memo, the proposed legislation fully repeals current abortion law, including a “broad range” of constitutional statutes related to the procedure and other aspects of law not related to abortion at all.

While it does repeal several aspects that federal courts have declared as unconstitutional, “A bill intended to repeal only unconstitutional provisions of Illinois law would have been half a page long, not 120 pages.”

The memo makes a few main points against the Reproductive Health Act. One issue raised by its author suggests that by removing a provision of current abortion law, the procedure would be legal for a woman to pursue throughout the length of her pregnancy for “any reason whatsoever.” The memo also suggests the possibility that self-abortion might become legal under this proposal.

The Democratic measure additionally repeals sections of at least four current statutes that offer protections for health care providers and workers who refuse to assist in performing an abortion procedure. The memo contends that while one law, the Health Care Right of Conscience Act, would remain on the books, a legal challenge could render it ineffective.

The document also touches on a point made by Catholic Conference of Illinois, a group representing the state’s six bishops, in a news release Thursday. The Reproductive Health Act would mandate private health insurance companies to cover abortion procedures, giving everyone who participates financially in that plan — employees, employers and the company — no way to opt out.

“The Reproductive Health Act is an extreme bill that would basically enshrine abortion as a positive good in Illinois law,” according to the memo.

The legislation is House Bill 2495 and Senate Bill 1942. It was announced at a news event in Chicago by Sens. Melinda Bush and Elgie Sims, Jr., and Reps. Kelly Cassidy and Emanuel “Chris” Welch at the American Civil Liberties Union headquarters.

“As a woman, a mother and someone who has been a long-time supporter of full access to reproductive care, from contraception, abortion, pregnancy and postpartum care, it is time to modernize and update these laws to reflect the equality of women in Illinois,” Cassidy said at the time.

The proposal builds upon a law signed by former Republican Gov. Bruce Rauner that allows taxpayer funds to be spent on abortion procedures through Illinois’ Medicaid and state employee health insurance programs.

Attorneys with the Thomas More Society filed a lawsuit challenging that legislation. They are waiting to hear whether the Illinois Supreme Court will take up the case.