Pro-life law firm says Raoul, other AGs, should ‘stay in their own lane’ 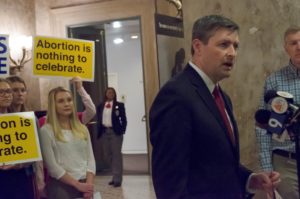 SPRINGFIELD — An anti-abortion law firm official said Monday that Attorney General Kwame Raoul was “interfering” in Indiana’s health care regulation system when he filed a court document in support of an abortion facility trying to open there.

The state of Indiana denied Whole Woman’s Health Alliance’s license application to open a medication abortion clinic in part because the organization did not disclose information about its affiliates in other states. Fourteen other attorneys general signed on to the document Raoul submitted to the court in favor of the Alliance.

Peter Breen, vice president and senior counsel for the Thomas More Society, said officials in South Bend, Indiana, the selected site of the facility, have a “right to ensure that all businesses operate in a safe manner.” He is a former state representative from Lombard, and was the minority floor leader in the previous General Assembly.

“This affront is akin to a group of health inspectors from around the country trying to block Chicago from closing a restaurant for code violations,” Breen said in a news release Monday.

In the court filing, Raoul argued the abortion clinic should be permitted to open because women crossing state lines to access such services “can strain the health care systems in neighboring states.”

“Women have the right to make their own reproductive health care decisions, and they should be able to access safe health care within their communities,” he said Thursday in a news release. “I am leading this filing because the state of Indiana’s blatant attempt to deny women access to safe medication abortions is unconstitutional, and I will continue to fight any unjust, unconstitutional policies that deprive women of access to safe reproductive health care.”

But Breen said Roaul and the other states supporting Whole Woman’s Health Alliance “might do better to stay in their own lane.”

“Rather than recognize the weakness of their argument, these forces attack attorneys general from across the country (and particularly from Illinois) who seek to ensure access to health care for all persons — in every state,” she said in an email. “Cruelly denying this care in support of an ideological agenda does not advance care for residents in any state.”

Raoul’s filing of the court document comes after Democratic Gov. J.B. Pritzker signed the Reproductive Health Act into law. It ensures no level of government in Illinois can restrict access to a woman’s or man’s access to pregnancy care, birth control, abortion procedures or other related services or benefits.

The statute makes Illinois an “aberration in the Midwest,” Breen said.

“Not content with setting itself up to be America’s ‘abortion destination,’ its attorney general has now led a group of East and West Coast states in attacking our neighbors in Indiana for their attempt to safeguard their women and children,” he added.