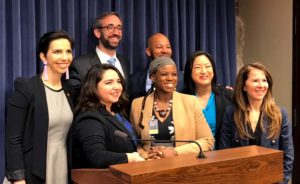 The Progressive Caucus, formed about a month ago, is supporting 10 measures so far this session, with another such announcement to come later this session, co-chair Rep. Will Guzzardi, a Chicago Democrat, said.

Those measures “demonstrate the values” the group’s 18 members hold as tenets of their caucus.

“We all, as a group, stand for basic rights and protections and basic decency and quality of life for all Illinoisans,” Guzzardi said, “to make sure that everyone has access to good education and good health care, and that our criminal justice system is truly fair, and that we treat everyone with decency and respect.”

The caucus supports a bill that would prohibit any unit of government from contracting with private entities to operate correctional facilities.

According to the measure, “Detention requires the exercise of coercive police powers over individuals that should not be delegated to the private sector.”

Urbana Rep. Carol Ammons said this measure would open the door for the installation of private immigration detention centers in Illinois, such as one proposed by the Livingston County village of Dwight.

The legislation, House Bill 2040, passed the chamber by a vote of 85-26 on Wednesday. It is being championed in the Senate by Chicago Democrat Robert Peters.

The group is also putting its support behind Rep. Delia Ramirez’s bill to expand the state’s homeless prevention program.

“We know that when we talk about who is experiencing homelessness, what people thought was the face of homelessness 20 years ago is very different from today,” Ramirez said. “As a matter of fact, the average age is about 11 years of age.”

For households on the brink of homelessness, the legislation would broaden the amount of rent or mortgage payments that could be made by grantees from three months to six months. Ramirez said that will save just more than $7,500 for each individual the state is able to “stabilize before they become homeless.”

House Bill 3331 was approved by that chamber at the end of March and is sponsored in the Senate by Chicago Democrat Omar Aquino.

Other bills the Progressive Caucus endorsed Thursday include one that would regulate the pharmacy benefit manager industry, one that would close a loophole some corporations use to hide profits overseas and one that would mandate baby changing stations be installed in all public restrooms regardless of gender.

The group opposed one piece of legislation it said is an affront to freedom of speech and the right to protest. Industry and labor interests support the bill, House Bill 1633, which increases penalties for damaging “critical infrastructure.”

The caucus also supports Democratic Gov. J.B. Pritzker’s proposal for a graduated income tax, and a proposal to legalize recreational marijuana. The latter proposal does not have official language attached to it, but one of the group’s members, Rep. Kelly Cassidy, is spearheading the chamber’s efforts on the initiative.

Asked at a news event Thursday whether the effort to legalize recreational marijuana would be successful this session, by May 31, Ammons said “we are certainly marathon sprinters here in Springfield and we look forward to working it all the way to the last day if that’s what it takes for us to get that done.”

“This caucus certainly has concern about equity provisions in that bill, concerns about economic inclusion in that bill. We want to make sure that whatever is rolled out really has community benefit funds attached to that bill,” she said. “There are lots of provisions that need to be addressed.”