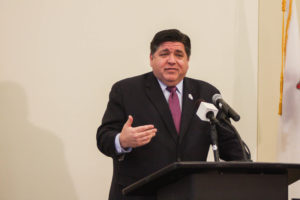 Gov. J.B. Pritzker speaks during a news conference last week after signing an order to make Illinois a member of the U.S. Climate Alliance. Pritzker and supermajorities in the House and Senate will likely push a progressive agenda as session begins this week. (Capitol News Illinois photo by Jerry Nowicki)

SPRINGFIELD — Newly-elected Democratic Gov. J.B. Pritzker comes into office with supermajorities in both chambers of the 101st General Assembly, which begins in earnest Tuesday.

Pritzker promises to deliver on a progressive legislative agenda that stands in stark contrast with that of his Republican predecessor, former Gov. Bruce Rauner.

Meanwhile, legislative leaders from both parties said they look forward to a new era in state government and a departure from the partisan acrimony that characterized the past four years, which led to a historic two-year budget stalemate.

Here’s a look at some of the issues that will likely dominate discussion during upcoming sessions, and what Pritzker and legislative leaders have said about them.

Illinois’ new governor said the legalization, regulation and taxation of recreational cannabis will be one of his first majority legislative efforts, to be accompanied by criminal justice reforms for convicted marijuana offenders in the state. Coupled with an expansion of gambling and the possibility of legalized sports gambling, these initiatives could become new sources of revenue.

Another could be an overhaul of the state’s income tax structure. Although Pritzker has never publicly given specifics for his plan, he has indicated a longer-term policy goal to be move Illinois to a graduated income tax rate, which goes up as income grows. 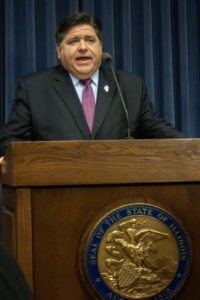 Gov. J.B. Pritzker speaks during a news conference in the Illinois Statehouse last week. Pritzker and supermajorities in the House and Senate will likely push a progressive agenda as session begins this week. (Capitol News Illinois photo by Jerry Nowicki)

The governor has no formal role in this process. Instead, it would require an amendment to the state constitution. For that to be successful, three-fifths of lawmakers from both chambers — 36 in the Senate and 71 in the House — would have to place the measure on a ballot. It would then need to gain the approval of 60 percent of voters.

Pritzker noted this would likely not happen until the 2020 presidential election.

Illinois’ railways, roads, bridges, freshwater arteries and other transportation infrastructure will also be rehabilitated, the governor said, if his plans for a capital bill are successful. He additionally noted the need to overhaul the state’s information systems, and spoke of delivering high-speed broadband internet coverage to “everyone, in every corner of Illinois” in his inaugural address.

In the same speech to voters, Pritzker said “our obligations as a state outmatch our resources,” yet he promised to introduce and pass a balanced budget which accounts for his new programs without putting the burden on “the starving, the sick and the suffering.”

He also said working men and women “deserve a $15 minimum wage,” which the Senate Labor Committee plans to discuss at a Wednesday hearing. Rauner vetoed a similar bill last year that would have raised the minimum wage from $8.25 to $15 by 2022.

Last week, Pritzker signed an order to make Illinois the 18th state to become part of the U.S. Climate Alliance, a bipartisan group committed to abiding by the terms of the Paris Climate Agreement. Pritzker said there will be ongoing discussions about regulation and rate structures regarding energy producers, and said the state will see a “gradual evolution” when it comes to environmental justice.

The General Assembly’s Democratic leadership said they understand the realities of Illinois’ fiscal position. House Speaker Michael Madigan said the state has “a debt load that is far too high” and a “significant budget imbalance” during a speech he made at the House inauguration ceremony Jan. 9.

Senate President John Cullerton said the two-year budget impasse “threatened the very fabric of our state” during his speech at the Senate’s inauguration ceremony the same day.

But before either chamber can begin work to address that issue, or tackle the myriad others both leaders said are on deck this session, Madigan and Cullerton said lawmakers and Pritzker must take one lesson from the previous administration — Illinoisans are tired of partisan fighting and lack of action on the part of politicians.

“The people back home have no tolerance for impasses and infighting,” Cullerton said.

Both leaders agreed Illinois’ transportation infrastructure needs state investment — commuter trains are dated and the roadways used for daily commute need work. Cullerton harkened back to a construction program enacted a decade ago that “invest[ed] in the people, employers and systems that make Illinois great” and called for the creation of another such program.

Training Illinois’ workforce for jobs in the health care, transportation and other trade industries was the Senate president’s other main initiative. Cullerton said teaching skill sets employers want with basic skills employees need will both increase the quality of the state’s workforce and attract businesses.

“I think the employers of this state value their workers just as much as workers value their jobs,” he said. “And we want both to succeed.”

For the Illinois GOP, the next two years present a unique challenge. After losing five seats in the House, and three in the Senate, during the 2018 elections, they now find themselves in a superminority in both chambers and out of power in the governor’s office.

But with hopes of a new era of bipartisanship in the Statehouse, Republicans still hope they can remain relevant and have a voice in the shaping of future legislation, especially when it comes to crafting a state budget and making any major changes to the state’s income tax system.

Rep. Jim Durkin of Western Springs and Sen. Bill Brady of Bloomington are returning in their roles as the House and Senate minority leaders. Both have said they want to push for more fiscal restraint, pension reforms and a balanced state budget. They also plan to oppose any shift toward a graduated income tax structure that would impose higher tax rates on upper incomes.

One of the first issues Republicans hope to put on the agenda, however, is election reform, and specifically the drawing of state legislative and congressional district maps following the 2020 census.

Earlier this month, the entire House Republican caucus introduced what they are calling a “Fair Maps Amendment,” a proposed constitutional amendment that would hand over the highly-politicized task of redistricting to an independent bipartisan commission.

“Governor Pritzker has urged the Legislature to create an independent commission to draw legislative maps, so House Republicans are proposing to do just that,” Durkin said in a statement announcing the proposal.

Like Pritzker’s income tax proposal, a change to how legislative maps are drawn would require three-fifths votes from both chambers and a 60 percent approval from voters.