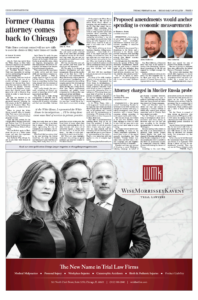 The Chicago Daily Law Bulletin published this piece in print on Tuesday, Feb. 20, 2018. The jump is below.

Published by the Chicago Daily Law Bulletin on Feb. 20, 2018

The amendments, proposed by a Republican in the House and a Democrat in the Senate, would prevent lawmakers from spending more money from the state’s main account than Illinois’ economy grew that fiscal year.

Crystal Lake state Rep. Allen Skillicorn, the sponsor of House Joint Resolution Constitutional Amendment 38, said having a balanced budget will help lawmakers keep their promises to constituents to fund services, education and “provide what the state should provide.”

“It’s not an option or choice anymore — we have to do this to be able to save our state,” Skillicorn said.

Sen. Tom Cullerton, a Democrat from Villa Park, is the sponsor of Senate Joint Resolution Constitutional Amendment 21. He did not respond to multiple attempts for comment. 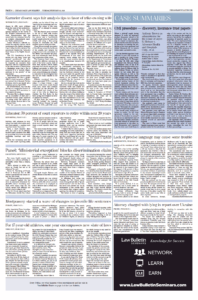 The jump is in the right column below the fold.

The rate of growth is calculated from data collected by the federal Bureau of Economic Analysis.

The second adds language that would allow legislators to exceed those spend limits if they agree an “emergency exists” and pass a resolution “by a record vote of a majority of the members of each house.”

“I think a key is that spending growth has been four times faster than the actual GDP growth of our state,” Skillicorn said, “so bringing that to a similar pace is going to help everyone keep their promises.”

An amendment requires three-fifths support from members in both the House and Senate to be placed on the ballot in November. To be approved, it also requires either the support of 60 percent of those voting on the question or a majority of all voters to sign off on it.

Among the proposals’ detractors is John Marshall Law School professor Ann M. Lousin, an attorney who worked at the 1969 Constitutional Convention.

“It is poorly drafted, it is unnecessary and it would cause all sorts of disasters,” she said.

Lousin said amendments need to be written differently than statutes, both in terms of length and precise language used.

In several places in the Illinois Constitution, such as Articles IV and IX, the drafters used the phrase “a majority of members elected to each house” when referencing how a bill can become a law, how the legislature can override a veto or how much debt can be incurred. In the proposed amendments, Skillicorn and Cullerton instead use the phrase “a majority of the members of each house.”

She also pointed out the proposed amendment is limited to only one fund. To navigate around the stipulations of this amendment, should it pass, all the General Assembly would have to do is spend from any of the other roughly 740 active funds used to pay bills or state expenses.

In some instances, though, Skillicorn said, “it may be appropriate to do something like that” especially if a revenue stream existed for a specific appropriation, such as education or transportation.

The amendment also does not give a definition of what constitutes as an emergency, which Lousin said poses an “interesting question.” The legislature would try to define it as they need to, but both chambers could define it differently.

But Skillicorn said the measure is purposely vague, which allows the legislature to “come up with” the meaning of emergency as different situations, such as a natural disaster or economic crash, unfold.

Voters have weighed in on 22 separate amendment proposals since Illinois’ current constitution was enacted in 1970, 14 of which were approved. Those include two in 2014 that were meant to strengthen crime victims’ rights and block restrictive voting laws, and one in 2016 that mandated funds from vehicle-related proceeds and taxes could only be spent on transportation projects.