Push renewed to raise age to 21 for tobacco sales 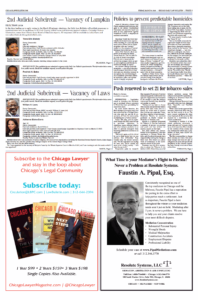 The Chicago Daily Law Bulletin published this piece in print on Friday, March 09, 2018. The jump is below.

Published by the Chicago Daily Law Bulletin on March 09, 2018

SPRINGFIELD — Legislation aimed at changing the minimum age to purchase tobacco products in Illinois has been percolating for about four years.

Its most recent iteration, the third attempt in as many years, was submitted by a Chicago Democrat who said she and its 22 co-sponsors, all from the same party, are fighting for a “better society.”

House Bill 4297, and its equivalent Senate Bill 2332, raise the age to purchase cigarettes, e-cigarettes, vapes, chewing tobacco and other tobacco products in an effort to prevent teenagers from becoming addicted to nicotine at an early age.

“We’re at it again, and it’s critical for us to think about how we can address this differently,” Rep. Camille Lilly, the House sponsor, said. “We the legislators are saying we hear you. You’re saying you want to be a better society — let’s raise the age to 21.”

Proponents point to research that suggests 95 percent of current smokers began the habit before the age of 21. Opponents say if someone is old enough to join the military, vote or get married, they should be old enough to smoke. 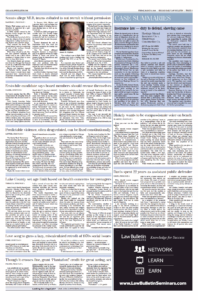 The jump is below the fold in the left column.

“Voting and my right to choose who I marry and potentially build a family with seem more core to a liberty we would want to protect than picking up a cigarette. Drawing those together is problematic,” Stephanie Morain, an assistant professor at Baylor College of Medicine in Houston, said.

Morain is a national proponent for Tobacco 21. She has conducted a number of surveys on smoking and youth and has written numerous papers on the topic.

But state efforts are encountering “a lot of pushback,” Lilly, who represents a Chicago House district, said. Local governments have responded by making the change at their level. The result is a patchwork of ordinances in the northeastern corner of the state.

Evanston was the first community to adopt the Tobacco 21 initiative in 2014. Since then, use of all tobacco products among high schools decreased 37.5 percent, according to an American Heart Association fact sheet.

When Lake County approved the measure, which took effect Jan. 1, it was the first county to do so. The move caused confusion for other areas hoping to do the same but that felt stymied by a restriction in the state’s constitution.

According to Section 6 of the state’s governing document, a home-rule unit is a “[c]ounty which has a chief executive officer elected by the electors of the county and any municipality which has a population of more than 25,000 are home rule units.”

The first communities to change their statutes are home rule units, large enough that they are able to self-govern in areas not specifically prohibited by the General Assembly. Lake County is not one of these authorities.

Lake County Health Department Executive Director Mark Pfister exploited a loophole to pass an effort he likened to the statewide push to ban smoking from public places in 2008.

Instead of passing a new ordinance, which it legally did not have the authority to do, the Lake County Board voted 19-2 to amend its existing County Code giving the health department permission to manage tobacco sales.

“The act that allows us to regulate these products right now neither prohibits nor gives us permission to raise the age to 21,” Pfister said. “Our authority comes from a statute under the County Codes for Board of Health, so one thing we are tasked with is what I consider primary prevention.”

The effort started when Pfister held a summit of more than 200 entities from Lake County communities, including law enforcement, hospitals, politicians and park districts.

The health department had three issues it wanted to tackle — passing Tobacco 21 laws, encouraging residents to cut down the obesity rate and building a better capacity to handle mental health — and it wanted to know which was the most doable.

More than 90 percent of those present, Pfister said, wanted to raise the age to purchase tobacco products. From there, it was a matter of sending notice of the proposed changes to the entities already regulated by the health department, holding public hearings, going through the appropriate committees and then presenting the proposal to the county board.

Once the measure passed, Pfister also sent notice to vaping shops and other stores that were not previously regulated.

“This is a product that is known to do harm — we have over 60 years of data to support that claim. The harm to be prevented is substantial,” he said.

Morain also pointed out that while states might be concerned about the sales tax revenue drawn from tobacco products, and that is something to be considered, “states’ revenue and budgets should not be dependent on getting 15-year-olds addicted to cigarettes.”

The legislative gymnastics Lake County performed to pass the initiative does not appeal to every local governing body that supports the tenets of Tobacco 21.

Andrew Wheeler, chairman of the Kankakee County Board, expressed doubts his county could do what Lake County did.

The conversation, whether it leads to the passage of new ordinances or resolutions in support of the measure, is important, Lilly said.

“The beauty of different people picking up this charge is an indication of the importance of this issue,” she said. “This issue is being talked about and addressed and advocated for across categories of our society. That means something.”