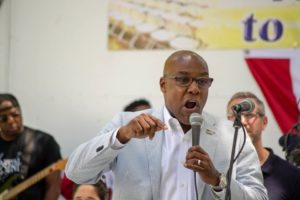 Attorney General Kwame Raoul speaks during the Governor’s Day Picnic Aug. 14 on the Director’s Lawn at the Illinois State Fair in Springfield. Raoul has joined other attorneys general in a court filing in support of a women’s medication abortion clinic trying to open in Indiana. (Capitol News Illinois photo by Jerry Nowicki)

SPRINGFIELD — An abortion clinic in northern Indiana should be allowed to open, Illinois’ top lawyer argued in a court filing, because women crossing state lines to seek access to such care “can strain the health care systems in neighboring states.”

Attorney General Kwame Raoul is the main author of a document submitted with 14 other states on behalf of Whole Woman’s Health Alliance. The organization sued Indiana officials in federal court after a license application to open a facility in South Bend, Indiana, offering medication-induced abortions was denied in part because the alliance did not include information about its affiliates in other states.

Half of Indiana’s 12 abortion facilities are in Indianapolis, according to a news release. Many women living in the northern part of the state “travel significant distances” to get the procedure, so the denial of the alliance’s clinic license would “place a substantial obstacle in the path of northern Indiana women seeking previability abortions,” the court document states.

“Women have the right to make their own reproductive health care decisions, and they should be able to access safe health care within their communities,” he said Thursday in a news release. “I am leading this filing because the state of Indiana’s blatant attempt to deny women access to safe medication abortions is unconstitutional, and I will continue to fight any unjust, unconstitutional policies that deprive women of access to safe reproductive health care.”

The attorney general added facilities might face increased “levels of demand that they cannot satisfy” if women seek abortion procedures in neighboring states like Illinois.

“In short, the repercussions of [the state of Indiana’s] unlawful actions are not limited to their state or the women who live there,” according to the court document.

Democratic Gov. J.B. Pritzker has expressed a willingness to help women access abortion and other reproductive health care services in Illinois if they could not do so in their own state.

“Illinois knows where we stand and we’re going to be here for women if they have to be refugees from other states,” he said on June 12 when he signed the Reproductive Health Act into law. “… We want women to be able to access health care where they live, and all of us believe in that.”

The RHA declares access to pregnancy care, contraception, birth control, abortion procedures and other related benefits a fundamental right, which means no level of government in Illinois can infringe upon a woman’s or man’s access to reproductive health care.

Raoul added Illinois residents attend institutions of higher education in the northern Indiana area, and “although these students may have temporarily left … to pursue their education,” Illinois and the other states that signed on to the court filing “retain an interest in ensuring that they are spared the ‘stress, anxiety, shame, and financial hardship’ associated with not having access to constitutionally protected medical care.”