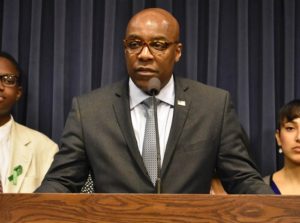 Attorney General Kwame Raoul speaks during a news conference May 15, 2019, at the Statehouse in Springfield. Raoul on Tuesday joined 10 other attorneys general in asking the U.S. Environmental Protection Agency to not only adopt regulations that “adequately protect public health and the environment from the well-documented risks posed” by the gas, but work with the U.S. Food and Drug Administration to research alternative sterilization methods and “end the over-reliance” on ethylene oxide. (Capitol News Illinois file photo by Lindsey Salvatelli)

More than 70 lawsuits have been filed against Sterigenics, a medical supply sterilization company in suburban Willowbrook, claiming exposure to the gas caused serious health problems. That companyclosed its doors in Illinois last year after facing intense public backlash.

Attorney General Kwame Raoul and 10 other attorneys general sent a letter to EPA Administrator Andrew Wheeler asking the agency to not only adopt regulations that “adequately protect public health and the environment from the well-documented risks posed” by the gas, but also to work with the U.S. Food and Drug Administration to research alternative sterilization methods and “end the over-reliance” on ethylene oxide.

The dangers of its emissions from such wholesale sterilization facilities as Sterigenics “may have been significantly underestimated for years,” according to the letter.

“As an EPA investigation into one company in Willowbrook, Illinois shows, these facilities are very likely under-reporting actual emissions and so obscuring the true extent of the hazard posed by their operations to workers and residents in neighboring communities,” the attorneys general wrote. “And there are similar facilities that may pose a similar risk in many of the undersigned states.”

The coalition recommended the agency’s National Emissions Standards for Hazardous Air Pollutants include a mandate that large-scale sterilization facilities trap all generated ethylene oxide emissions, and reduce discharge of all other emissions by “at least 99.9 percent,” according to the letter.

They also advocate for such companies to install and maintain a “continuous emissions monitoring system.”

“The EPA has a responsibility to protect the health and safety of residents by adequately regulating hazardous air pollutants,” Raoul said in a news release. “I urge the EPA to live up to this responsibility and implement the standards needed to address the severe risks to public health and the environment posed by (ethylene oxide) emissions.”

In 36 states, including Illinois, there are more than 100 total commercial sterilization facilities subject to the EPA’s regulation. State lawmakers “have been required to step in and regulate” emission of the gas because the federal agency has not revised its rules “to reflect current science,” according to Raoul’s office.

“As the EPA itself stated in May 2019, ‘risks could be reduced’ if commercial sterilization facilities were more highly controlled,” the attorneys general wrote in their letter to the agency.

Exposure to ethylene oxide — which Raoul called a “toxic chemical” — can cause lung injury, nausea, vomiting and cancer, among other risks, according to his office.

Senate Bill 1854 applies emission limits on non-sterilization facilities that emit ethylene oxide, requiring those facilities to obtain a permit from the Illinois Environmental Protection Agency, which must include a site-specific cap on the facility’s ethylene oxide emissions. It also requires the IEPA to conduct unannounced inspections and air testing at least once annually.

Another measure to phase out the use of the chemical except in sparsely populated areas failed in a Senate committee last year, while further regulations could come up again this legislative session.