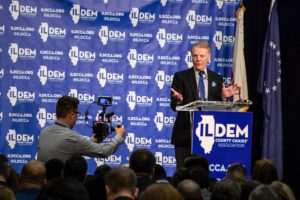 An investigation into the “workplace culture” of Illinois House Speaker Michael Madigan’s office found his former chief of staff contributed to a culture of bullying pervasive throughout the Capitol system. Madigan is pictured at the Illinois Democratic County Chairs’ Association brunch in Springfield on Wednesday, Aug. 14. (Capitol News Illinois photo by Jerry Nowicki)

SPRINGFIELD — An investigation into the “workplace culture” of Illinois House Speaker Michael Madigan’s office found his former chief of staff contributed to a culture of bullying pervasive throughout the Capitol system.

The review, conducted by former federal prosecutor and former executive inspector general Maggie Hickey, was called for in response to allegations of harassment. She currently works for Schiff Hardin LLP.

Hickey found “by far the most consistent criticism” of more than 100 people interviewed was “bullying,” according to the report released Tuesday. The issues, including “hazing” experienced by some workers, were described as “inevitable” due to long hours workers spend in the Statehouse and the “militant” nature of Madigan’s staff.

Madigan and a group of female Democratic lawmakers called for Hickey to conduct the probe of the Speaker’s office in June 2018.

“I welcomed this independent review to better understand the workplace culture within the Office of the Speaker and to help improve the environment in the Capitol,” Madigan said in a press release.

One of the allegations was against Timothy Mapes, who was the speaker’s chief of staff for more than 25 years and clerk of the House for more than six years before resigning in June 2018.

Sherri Garrett, an account technician, worked in the Statehouse since the 1980s. She made eight allegations against Mapes, which Hickey classified into three groups in her report: illustrations of Mapes’ leadership approach, examples of how he managed workplace harassment complaints and allegations he made inappropriate comments at work.

In interviews for the investigation, she told Hickey that Mapes had “an inordinate amount of power in the State,” according to the report, including influence over harassment complaints. Hickey’s report said most of the people she interviewed, regardless of their opinion of Mapes, said he “commonly threatened people’s jobs” or “reminded them that they were dispensable.”

Hickey concluded Mapes “had a habit of being discourteous to workers and representatives.”

“The number of independently verified instances of Mr. Mapes’s derogatory behavior was overwhelming,” Hickey said in her report. “Mr. Mapes had a reputation for denigrating workers and threatening their jobs.”

The report also found Mapes made “discourteous and inappropriate comments” to and around Garrett, as well as other workers, to “[exert] power” over them.

“It is my position that the recent criticisms made against me do not truly appreciate the size of the responsibility of my position,” Mapes said in a statement distributed by his law firm, Clifford Law Offices. “The daily needs of my position required constant attention in order to ensure the successful operation of our government. I made every effort to satisfy these demands.”

But in her report, Hickey noted Mapes held “substantial actual and perceived authority” in Madigan’s office as well as the Capitol.

“Whether he intended it or not, many workers said that Mr. Mapes caused them to believe that they were easily replaceable, and therefore, they made sure not to make waves, even if they would have had workplace harassment concerns that they believed warranted attention,” according to the report.

She recommended Madigan reorganize the hierarchy of his office to prevent the amount of power and influence Mapes wielded to again rest with one person. In the report, she suggested the speaker take on a greater role in his office and delegate additional responsibilities to senior members of his staff.

The document also states the speaker’s human resources department should be given additional authority, workers should receive more harassment training, and the office should have clearer reporting structures.

“I truly hope that the workplace culture changes so that people doing this important work are treated with the respect and dignity they deserve,” Garrett said in a press release.

The report said that while many people believe the power wielded by the speaker’s office “has been used to silence opposition” and “discouraged some people from coming forward,” many of those interviewed also believed the office “can use its power to eliminate harassment and discrimination from the Capitol workplace by being transparent, accountable, and a model for other workplaces and legislatures.”

Cassidy alleged in mid-May 2018 that she was the subject of retaliation by Mapes, Madigan and Blue Island Democratic Rep. Robert Rita for speaking out about how the speaker’s office handled harassment complaints.

The report did not find any evidence of wrongdoing of the three men.

Loncar last year accused former Chicago Democratic Rep. Lou Lang of sexual harassment for an action which occurred more than five years ago when they were working on legislation together. Hickey noted in the report that Loncar did not cooperate with the investigation, and Lang, who is now a registered lobbyist at the Statehouse, denied the allegations against him, calling them “absurd.”

The report notes “there is insufficient evidence to conclude that Representative Lang engaged in wrongdoing.”