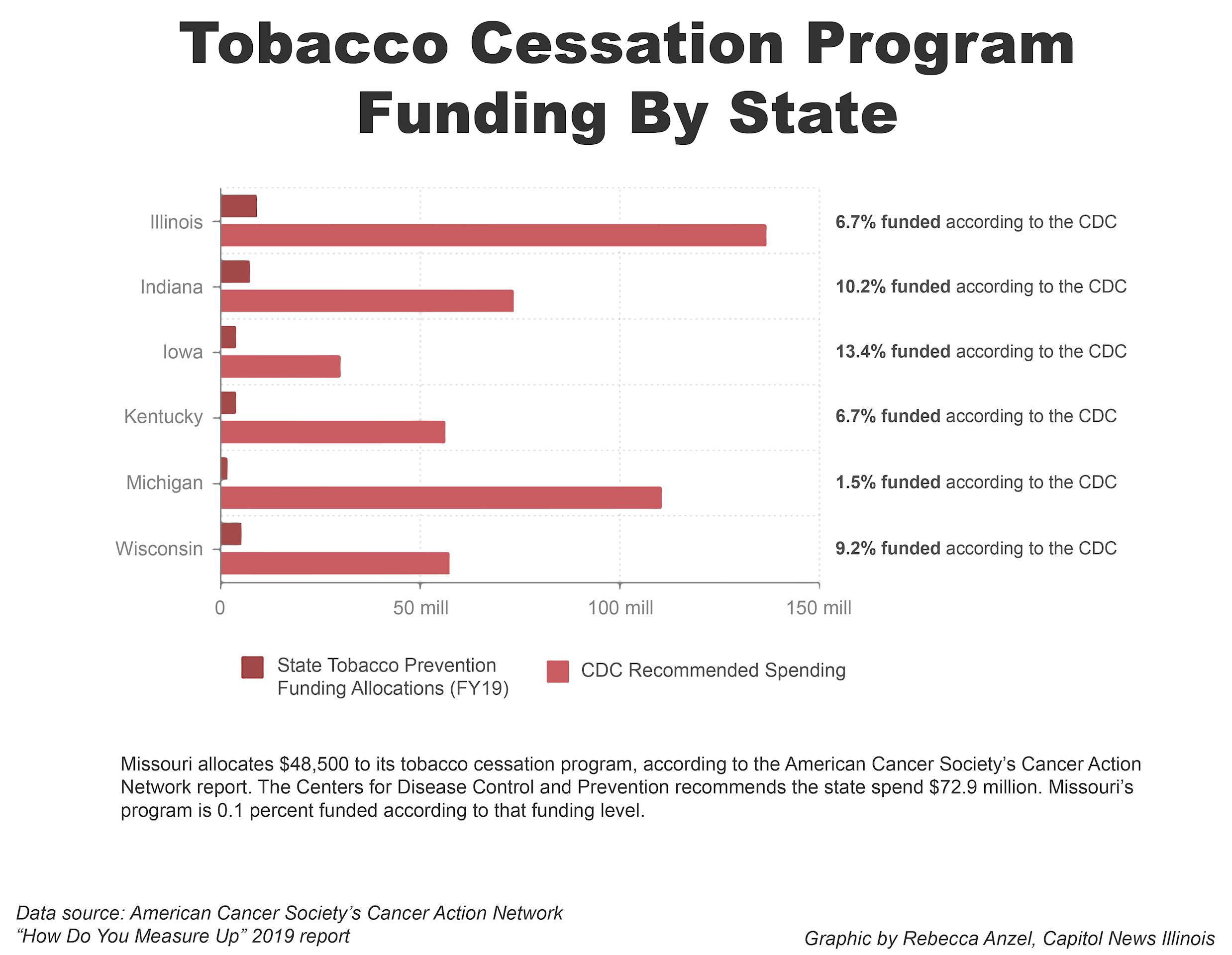 SPRINGFIELD — Illinois compared favorably to other states in a report by a national advocacy group evaluating cancer reduction policies in all but one area — funding for its cessation program.

After a legislative session in which the General Assembly raised the minimum age to buy tobacco products, increased the usage tax on cigarettes and implemented a tax on e-cigarettes for the first time, an analysis by the American Cancer Society’s Cancer Action Network found Illinois does not spend enough money helping those addicted to nicotine to quit.

The Centers for Disease Control and Prevention recommends that Illinois spend $136.7 million on a tobacco prevention and cessation program. According to the report, Illinois allocates $9.1 million to the initiative, 6.7 percent of the recommended level.

“There is plenty of work to be done in Illinois to really prevent cancer and ensure that our policies are matching our priorities,” Shana Crews, government relations director for the American Cancer Society’s Cancer Action Network, said. “Every year, it’s interesting to see which states are really excelling and which states have room to grow. A lot of times in Illinois, people take for granted that we’re on the forefront of this, that and the other. The tobacco control funding is one area of improvement for sure.”

The solution, the advocacy group recommends, would be for the state to spend more money on its cessation program from a multi-state lawsuit it won against the tobacco industry in the late 1990s. Called the Tobacco Master Settlement Agreement, companies agreed to pay several states annual sums to compensate for medical costs related to smoking.

Illinois is being paid more than $9.1 billion through 2025 as a result of the lawsuit, according to the Department of Public Health.

“The American Cancer Society Cancer Action Network challenges states to combat tobacco-related illness and death by funding comprehensive tobacco control programs at CDC- recommended levels or above, implementing strategies to continue that funding over time and applying the specific components delineated in the CDC’s best practices guide,” according to the report.

A spokesperson from the Illinois Department of Public Health said in an email that Illinois will spend about $20 million of settlement-related money this fiscal year on “health related programs” — $4.1 million to run the Quitline, $5 million for anti-smoking program grants to local health departments and additional funds allocated to an assortment of other health programs for community health centers.

“Illinois is spending the largest share of funding as intended, on the medical costs of those who have suffered health issues as a result of tobacco,” the spokesperson said in an emailed statement. “The majority of the funds ($200 million) are allocated for Medicaid to pay for health care costs because tobacco is a major contributing factor in cancer and other diseases. By using the funds on Medicaid-related health-care costs, we obtain federal matching dollars, which allows Illinois to spend additional dollars on critical health care.”

It is important to fully fund initiatives to help those addicted to nicotine quit or to prevent youth from beginning to use tobacco products, according to the Action Network report, because states will experience a “greater and quicker” cost savings impact.

No state supports its tobacco prevention and cessation program at the level the CDC recommends, according to the report. Only four states allocate enough money to fund their program at 50 percent of what the CDC prescribes.

“This year was such a big year for tobacco control in Illinois, and really making some strides and gains in preventing one of the most preventable types of cancer. We’re very pleased with how lawmakers voted this year,” Crews said. “We still have some strides to go when it comes to other prevention tactics we know work. A lot of it is all things you learned way back when in health class.”

Democratic Gov. J.B. Pritzker signed into law “Tobacco 21,” a measure raising the legal age to purchase products containing nicotine — including cigarettes, e-cigarettes, vapes and chewing tobacco — from 18 to 21 in early April. Illinois is the first state in the Midwest to have such a statute.

And included in a law funding vertical infrastructure projects is a usage tax increase of $1 on cigarettes and a new tax on e-cigarettes of 15 percent of the wholesale price. Illinois was recognized in the Action Network report as a “success story” for these initiatives.

“Prevention is hard because there’s no immediacy to it, but it ends up paying off the most in the long run,” Crews said.

She added the American Cancer Society’s Cancer Action Network’s legislative goals for the upcoming session include measures that will ensure “the whole cancer patient is taken care of,” such as access to diagnostics and screenings as well as treatment and survivorship care.