Transparency urged; calls made for inspector general reports to be made public 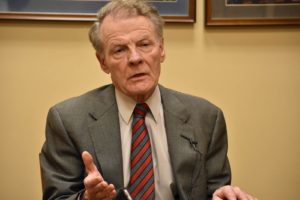 House Speaker Michael Madigan speaks May 6 to students in the Public Affairs Reporting program at the University of Illinois Springfield. A report released Tuesday by his office Tuesday concluded a culture of bullying and intimidation existed in the speaker’s office and throughout the Capitol system. His chief of staff on Thursday called for other legislative caucuses to conduct and make public similar investigations.  (Capitol News Illinois photo by Lindsey Salvatelli)

SPRINGFIELD — Illinois House Speaker Michael Madigan believes the three other legislative groups should conduct independent reviews of their workplaces, his chief of staff said in an email Thursday.

A report released by his office Tuesday concluded a culture of bullying and intimidation existed in the speaker’s office and throughout the Capitol system. The results of the investigation, called for by Madigan and a group of female lawmakers in June 2018, were made public because the speaker values transparency, Jessica Basham, his chief of staff, said.

Senate Democrats and Republican caucuses in the House and Senate should conduct similar investigations, she said.

“To make meaningful change, you need to examine the past and get input from everyone,” Basham wrote in an email. “… We should strive to be transparent while respecting the confidentiality of those who wish to remain anonymous. The speaker’s goal is for the office to be a place where everyone is comfortable to bring forth allegations, knowing they will be treated with compassion and the process will be fair for all parties.”

The document’s publication prompted a focus on workplace culture at the Capitol this week, and a discussion about the necessity of transparency in fixing a system Democratic Gov. J.B. Pritzker said has been “pervasive for a long time.”

At signing ceremonies for two statutes — one affording protections to those who rent homes in Illinois and are not U.S. citizens, and the other increasing the minimum wage for teachers — the governor fielded questions about the environment for state employees under the dome.

He said the culture of sexual harassment, which “exists in Springfield on both sides of the aisle,” needs to be challenged.

“The only way to do that — you can’t just do one-time trainings, you can’t just announce that this is a problem — you have to be persistent and consistent about addressing it,” Pritzker said Wednesday.

But he also stressed the importance of transparency in the system set up to investigate complaints of misconduct.

“Transparency is critically important,” the governor said Thursday. “Once we know that people need to be held accountable and there’s information that ultimately as a result should be shared, we want to make sure that it’s transparent.”

That message of accountability is a theme echoed in the report shared by Madigan’s office. Written by former Executive Inspector General Maggie Hickey, it states that many interviewed for the investigation believe the speaker’s office “can use its power to eliminate harassment and discrimination from the Capitol workplace by being transparent, accountable, and a model for other workplaces and legislatures.”

Meanwhile, Barrington Hills Republican Rep. David McSweeney said it is “outrageous” another type of report is not made public — a document compiled after an investigation of alleged wrongdoing by lawmakers or their staff.

Any complaints of discrimination, harassment, assault or instances of misconduct by someone working in or for the General Assembly goes to the legislative inspector general. Currently, that post is filled by Carol Pope, a former state’s attorney, circuit court judge and appellate court justice.

If the inspector general wants to investigate the complaint, she needs permission from the Legislative Ethics Commission. It is a panel of eight lawmakers — two from each of the caucuses. The exception is for allegations of sexual harassment, which she can investigate without permission.

Once an investigation is concluded and the inspector general submits her report to the commission, it is up to the panel of lawmakers whether that document is made public. The former inspector general, Julie Porter, wrote in an op-ed published in the Chicago Tribune in April, “The only way to hold a legislator accountable in Illinois — and to promote discussion and change — is for the LIG to be able to publish her findings.”

Before she left her post, Porter asked the commission to publish two reports, one in which she wrote a lawmaker “engaged in wrongdoing” and one she did not elaborate on. The ethics commission declined.

“I am statutorily bound to preserve the details as confidential, so I cannot describe the matters or the nature of the violations that I found. What I can say is that the public should be reading about and debating my reports,” she wrote. “Some readers may agree with me, some may not — but either way, the process of understanding the LIG’s investigation and grappling with her conclusions would be much healthier than allowing them to be buried and forgotten.”

Hickey’s report, McSweeney said, supports his call “for full transparency about legislator misconduct.” The first step, he added, is for the head of his caucus, House Minority Leader Jim Durkin, to “immediately demand the release of the buried report.”

According to commission documents, the inspector general asked permission to open five investigations, including one harassment claim.

Spokespersons for the other legislative leaders did not directly respond to questions about whether they would pursue independent investigations into the workplace environment in their offices.

Durkin hired a law firm to “review, assess and evaluate our office procedures, protocols and work environment,” his spokesperson said in an email, “when the #MeToo movement unraveled under the dome.”

“Several employees were randomly selected to be interviewed from offices in Springfield and Chicago, and the entirety of the review lasted approximately two months,” she wrote. “The firm ultimately expanded the harassment section of the House Republican Staff Personnel Rules and Regulations Handbook to include a more comprehensive document for employees to turn to if they are subject to harassment. We have a zero tolerance policy of harassment of any kind.”

The Senate President’s Office’s personnel policies were updated not long after Senate President John Cullerton assumed the leadership position with the goal to “foster a safe, professional work environment in which anyone who feels victimized can come forward with confidence knowing that their rights and privacy will be protected,” a spokesperson said in an email.

A representative from Senate Minority Leader Bill Brady’s office did not respond to a request for comment.