Bush: Passage of abortion bill to make Illinois ‘a beacon for the country’

Published by Capitol News Illinois on May 31, 2019 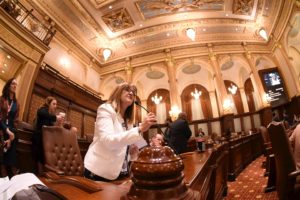 Senate sponsor Melinda Bush, D-Grayslake, speaks on the chamber floor Friday at the Capitol in Springfield about the Reproductive Health Act. The bill, which repeals and replaces current abortion law in Illinois, was passed by the Senate late Friday. The bill now goes to Gov. J.B. Pritzker. (Photo courtesy of Illinois Senate Democratic Caucus)

SPRINGFIELD — Legislation that backers and detractors agree will be the most liberal reproductive health statute in the country is headed to the governor’s desk after about 80 minutes of impassioned debate by the Illinois Senate late Friday night.

The abortion repeal-and-replace measure was a source of controversy this session. From its introduction in February, the Reproductive Health Act drew calls of support from advocates looking to the General Assembly to respond to restrictions enacted by some states across the country, and those of warning from opponents concerned about protections being struck from current law.

Sen. Melinda Bush, a Democrat from Grayslake and the bill’s sponsor in that chamber, said she hopes passage of the legislation will make the state “a beacon for the country.”

“I’m so proud that Illinois is standing up and saying, we’re not going back, we’re going to continue to fight and we’re going to make sure that women are equal here. Their reproductive rights are part of that,” she said.

In a statement, Democratic Gov. J.B. Pritzker said he will sign the measure.

“In Illinois, we trust women to make the most personal and fundamental decisions of their lives — and now, that will be the law of the land, even as it’s under threat in other states,” he said.

Pritzker was on the Senate floor after the vote, congratulating and hugging senators who pushed the bill.

Chicago Democratic Rep. Kelly Cassidy, the initiative’s sponsor in the House, was on the floor during the debate. In the back of the chamber were a handful of other Democratic representatives who supported the legislation — they stood and joined hands during Bush’s closing remarks.

“That was amazing to have them all over here — I was there when it passed in the House — because it was so important to all of us,” Bush said. “To have that amazing camaraderie and support and really love for each other; I’m just so proud of all these amazing women. It really felt like a sisterhood.”

Some of Bush’s colleagues who asked her questions during floor discussions were helping her establish what is known as legislative intent — if a legal challenge is filed regarding the bill and the judge finds its language unclear, he will turn to the sponsor’s aim to help him decide the case.

They asked her to clarify whether women would be able to get an abortion procedure at any point during her pregnancy if the Reproductive Health Act became law — Bush said it would not — and if anyone besides doctors could perform a procedural abortion — Bush said no. She read prepared answers to several of these questions.

Sen. Dan McConchie, a Republican from Hawthorn Woods, said if that was all the bill aimed to achieve, it would be one page — not 126. 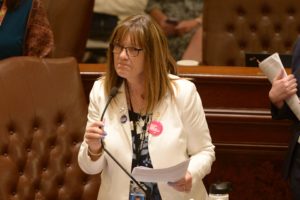 Senate sponsor Melinda Bush, D-Grayslake, speaks on the chamber floor Friday at the Capitol in Springfield about the Reproductive Health Act. The bill, which repeals and replaces current abortion law in Illinois, was passed by the Senate late Friday. The bill now goes to Gov. J.B. Pritzker. (Photo courtesy of Illinois Senate Democratic Caucus)

McConchie sought clarification on whether any provisions of the legislation would render toothless the Parental Notification of Abortion Law, which requires a minor to consult her parents before getting the procedure. Bush said no part of her bill would impact that statute.

“This proposal leaves me stunned,” McConchie said. “For anyone who wants abortions to be legal and safe, this bill will do exactly the opposite.”

“It goes far beyond the current practice in Illinois. It has provisions that could endanger rather than protect a pregnant woman and it’s not needed under current Illinois law or federal law,” she said. “Once again in Illinois, we are passing bills looking to solve a problem that doesn’t exist.”

She was referring to a law former Gov. Bruce Rauner signed that allowed tax dollars to be spent on abortions. It also contained a provision that would allow the procedures to remain legal in Illinois should the U.S. Supreme Court overturn its ruling in 1973 legalizing abortion across the country.

The measure additionally creates access to diagnostic testing, contraception, pregnancy benefits and other related health care as a fundamental right, barring the state government from infringing women and men’s access to those things.

“As states across the nation rush to implement dangerous abortion bans, Illinois has responded — by recognizing reproductive health care as a fundamental right, and by removing outdated, long-blocked statutes that make providing many forms of abortion care and some contraceptives a crime,” Colleen Connell, executive director of the state’s chapter of the American Civil Liberties Union, said in a statement.

U.S. President Donald Trump weighed in on the Reproductive Health Act on his Facebook page Thursday.

“The Democrat Party is unhinged,” he wrote. “Their radical position on abortion is horrible.”

The bill sat in legislative limbo since March, assigned to a subcommittee in the House with all the other reproductive health care and abortion-related measures introduced this session. In the Senate, its twin measure was never assigned to a substantive committee.

Calls for action were spurred by laws approved by states such as Alabama, Georgia, Ohio and Missouri restricting access to abortion. Some of those states aim to get their statutes to the country’s highest court in an effort to challenge the 1973 case Roe v. Wade, which legalized abortion procedures nationwide.

To advance the Reproductive Health Act, Cassidy abandoned her originally-filed bill, House Bill 2495, and amended another one in a move referred to in the Statehouse as a “gut and replace.”

The language was added, with amendments, to Senate Bill 25. Those changes reflected concerns raised by legislators, insurance groups, health care professionals and others.

“A coalition of organizations and activists have been working on this bill for a very long time,” Jennifer Welch, president of Planned Parenthood of Illinois, said. “We are confident that Governor Pritzker will follow through with his promise to make Illinois ‘the most progressive state in the country on reproductive rights’ and sign the Reproductive Health Act into law.”