Pritzker: Illinois will take in reproductive health ‘refugees’ from other states 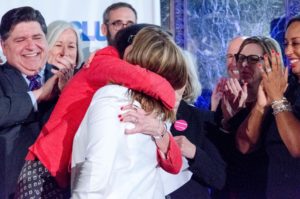 With Gov. J.B. Pritzker looking on, Sen. Melinda Bush (right) and Rep. Kelly Cassidy hug during the ceremony Wednesday in Chicago at which the Reproductive Health Act they sponsored in the General Assembly was signed into law. (Capitol News Illinois photo by Rebecca Anzel)

SPRINGFIELD — Democratic Gov. J.B. Pritzker made Illinois the most liberal state in the U.S. for access to reproductive health care with the stroke of 20 pens Wednesday at the Chicago Cultural Center.

It was a vow he made at the beginning of the legislative session, and a charge both backers and detractors of the Reproductive Health Act maintained would come to pass. The measure became law immediately with his signature.

Pritzker said the law makes the Prairie State a “beacon” for access to pregnancy care, contraception, birth control, abortion procedures and other related benefits by making access to these things a “fundamental right.” That means no level of government in Illinois can infringe upon a woman or man’s access to reproductive health care.

“Let the word go forth today from this place that if you believe in standing up for women’s fundamental rights, Illinois is a beacon of hope in the heart of this nation. We trust women,” the governor said.

While opponents say the law strikes protections from statute — including the automatic autopsy of a woman who dies during an abortion, penalties for an illegally-performed abortion post-viability and inspections of clinics where the procedure is done — proponents say it codifies current practices and removes aspects of statute enjoined by the courts.

“The government shouldn’t be able to tell a woman what’s best for her body and her future. By making the Reproductive Health Care law in Illinois, we’re sending a clear message — that we trust women to make their decisions about their bodies,” Senate sponsor Melinda Bush, a Democrat from Grayslake, said. “We believe that women should have the same autonomy over their bodies that men do.”

The legislation was introduced in February by House sponsor Rep. Kelly Cassidy, a Democrat from Chicago, and in the Senate by Bush. The twin bills sat in legislative limbo until early May, when calls for action came from advocates and lawmakers after moves by states such as Louisiana, Georgia and Missouri to restrict access to abortion procedures.

Some of those laws were passed to challenge the 1973 case Roe v. Wade, which legalized the procedure nationwide, before the U.S. Supreme Court.

“All of us believe the state of Missouri and the rest of the states that have passed laws taking away women’s rights should change their minds, should revisit the issue,” Pritzker said. “But Illinois knows where we stand and we’re going to be here for women if they have to be refugees from other states. We don’t want them to be — we want women to be able to access health care where they live and all of us believe in that.”

Missouri’s last remaining abortion provider, located in St. Louis, is locked in a legal battle to determine whether it can retain its license to continue to operate.

“There is a war against women, a war against bodily autonomy, and our opponents are using hateful, untrue and outright misogynistic rhetoric, which escalates daily and endangers women everywhere,” Cassidy said. “At our very doorstep, in 11 days, the people of Missouri will find out if they will lose the only clinic in their state and today, with the signing of this bill, we are building a firewall around Illinois to protect access to reproductive health care for everyone.”

Cassidy and Bush had another message — “elections matter.”

“When you elect women that are here to make a difference, that’s what they do and that’s what they did and I want to be clear. The freshmen women of the House, they really did move this bill,” Bush said. “Without their help, without their commitment, without their saying ‘Not on our watch;’ We ran when a president ran and told us it was OK to grab our body parts, and we’re saying ‘no more.’”

Republican President Donald Trump weighed in on the Reproductive Health Act last month before it was approved by the Illinois Senate.

“The Democratic Party is unhinged,” he wrote in a Facebook post. “Their radical position on abortion is horrible.”

Dick Durbin, the senior U.S. senator from Illinois, told reporters Sunday the law signed by Pritzker on Wednesday is a response to the larger national debate about abortion.

“What we’ve done here in Illinois with the Reproductive Health Act is to try to codify what we believe is the Roe v. Wade decision. That’s my understanding, and I would support that,” he said. “It is a shame that we’re back into this national debate, but clearly there is a design.” 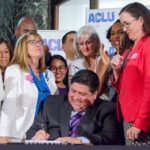 Gov. J.B. Pritzker laughs while signing into law the Reproductive Health Act during a ceremony Wednesday at the Chicago Cultural Center. “Let the word go forth today from this place that if you believe in standing up for women’s fundamental rights, Illinois is a beacon of hope in the heart of this nation. We trust women,” the governor said. Standing next to Pritzker are the bill’s sponsors, Sen. Melinda Bush (left), D-Grayslake and Rep. Kelly Cassidy, D-Chicago. (Capitol News Illinois photo by Rebecca Anzel) 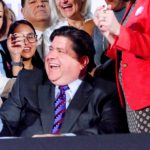 Gov. J.B. Pritzker laughs while signing into law the Reproductive Health Act during a ceremony Wednesday at the Chicago Cultural Center. “Let the word go forth today from this place that if you believe in standing up for women’s fundamental rights, Illinois is a beacon of hope in the heart of this nation. We trust women,” the governor said. (Capitol News Illinois photo by Rebecca Anzel) 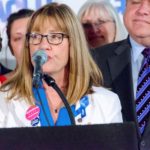 Sen. Melinda Bush, D-Grayslake, speaks during a ceremony signing the Reproductive Health Act into law Wednesday in Chicago. Bush, the bill’s sponsor in the Senate, said “women should have the same autonomy over their bodies that men do.” (Capitol News Illinois photo by Rebecca Anzel)

Immediately following the signing ceremony, opponents of the act held a news event in opposition to the new law. Present were representatives from the Thomas More Society, a Chicago-based pro-life law firm, and Illinois Right to Life Action, a pro-life lobbying group.

“It’s a tale as old as time. Illinois politicians are more concerned with pandering to cash-wielding progressives and Chicago media outlets than they are with representing the people of our state,” said Mary Kate Knorr, Illinois Right to Life Action spokeswoman. “Pritzker doesn’t care what the people of Illinois want, nor does he care that abortion takes a human life.”

“The governor and the Democratic supermajorities who fast-tracked this legislation have created a new ‘death penalty’ in Illinois, with no possibility of appeal, for viable unborn preemies,” said Breen, who was a state representative from 2015 until this year.

The Thomas More Society, Breen added, will mount a legal challenge to the new law.

He said he was most concerned about the removal of licensing requirements for abortion clinics, but pointed out the law also requires insurance companies that cover pregnancy-related benefits to cover abortion procedures and includes language specifying fetuses have no legal rights in the state.

“It is appalling in 2019 that anti-abortion advocates are still trying to shame women about their reproductive health care; we see it at some of our health centers every day,” Jennifer Welch, Planned Parenthood of Illinois president, said. “Whether it’s access to abortion or contraception, we’ve seen opposition to common-sense legislation that keeps women in control of their own health and lives.” 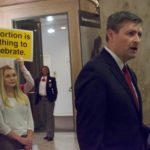 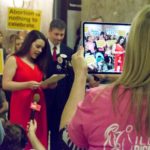 As a pro-life advocate records the news event Wednesday at the Chicago Cultural Center, Mary Kate Knorr, Illinois Right to Life Action spokeswoman, reads a statement in opposition to the Reproductive Health Act. “[Gov. J.B.] Pritzker doesn’t care what the people of Illinois want, nor does he care that abortion takes a human life,” Knorr said. (Capitol News Illinois photo by Rebecca Anzel)