Published by Capitol News Illinois on May 28, 2019 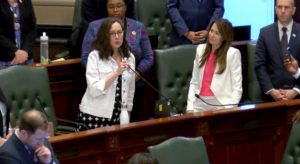 Rep. Kelly Cassidy, D-Chicago, makes her arguments in favor of the Reproductive Health Act she sponsored Tuesday during debate on the House floor of the Capitol in Springfield. (Credit: BlueRoomStream)

SPRINGFIELD — Lawmakers on Tuesday narrowly approved a bill overhauling Illinois’ abortion statute after more than two hours of debate that was passionate and, at times, emotional.

The Reproductive Health Act would replace the state’s current law with one backers and detractors agree would be the most liberal reproductive health statute in the nation.

It creates access to contraception, pregnancy benefits, abortion procedures, diagnostic testing and other related health care as a fundamental right, banning government from impairing access to those things for women and men.

The bill now moves to the Senate. Melinda Bush, a Democratic senator from Grayslake and the act’s sponsor in that chamber, said Monday she thinks it will succeed there. A committee hearing is expected soon.

Democratic Gov. J.B. Pritzker has vowed to “make Illinois the most progressive state in the nation for access to reproductive health care.” He said in a statement Tuesday he looks “forward to continuing my work as an ally by signing the Reproductive Health Act into law.”

The legislation’s passage comes as a hard-fought triumph for its sponsor, Chicago Democratic Rep. Kelly Cassidy. She said after months of working to advance this initiative down a path that at times has “not been very easy,” she is “very pleased” at its success.

Cassidy said she is also feeling “relief, just relief that this step is over and that we are poised to affirm our support for reproductive freedom in Illinois and intentionally stand out from all these other states that are attacking women’s rights.”

The  General Assembly’s lack of action on the measure harmed Illinois women, she added.

“I think people have a false sense of security around these issues, when the reality is that women are in real danger in Illinois as the result of our inaction,” Cassidy said at the beginning of the month.

The final vote was close — there were 64 Democrats voting in favor, 50 legislators from both parties voting no and four Democrats voting present. 60 votes were needed to pass the act successfully.

Advocates were trying to change minds and secure a favorable outcome right up until the vote. Several sources said Pritzker spoke to lawmakers Tuesday morning about why the tenets of the legislation were important to him.

Pritzker “did offer his support,” his spokesperson said.

One member who was wavering was Rep. Stephanie Kifowit, a Democrat from Oswego. She ultimately voted yes.

“It did seem like a bill that did a lot, and we did need to make sure everything was correct. I believe abortion should be safe and legal, but I believe it should also be rare,” Kifowit said. “My concern with the bill was with some of the language changes, and the legislative intent had to be there to make sure that it’s crystal clear what we’re doing.”

Rep. Maurice West, a Rockford Democrat, described on the floor how he has received four death threats and was told his wife and future children will lead “cursed lives.”

A preacher, he rose in support of the measure because, he said, he believes in the separation of church and state and the tenet of free will. Regulations passed in other states over the past few weeks have placed constraints on women, West said.

“My ancestors had physical chains and laws that governed their bodies. We fought a civil war because we wanted to keep black bodies chained and enslaved, and now you’re asking me, a black man, to put policy chains on a woman’s body, on reproductive health …,” he said.

“But now we’re living in a time where government is trying to take away basic freedoms, personal choice, and that worries me more than the threats to my life or the promised curses on my life — I’ll handle those. I know how to pray against those,” West continued. “At this time, I’ve decided to trust women to do what’s best for themselves.” 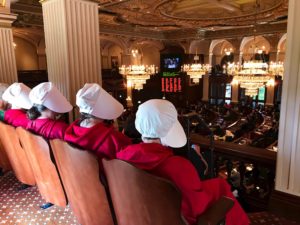 Recent passage of abortion restriction laws in states such as Alabama, Georgia, Missouri and Ohio spurred the measure to get a second life this session. Legislation in some of those states was advanced, in part, to challenge the 1973 U.S. Supreme Court case Roe v. Wade, which legalized abortion procedures nationwide.

“This vote makes it clear that Illinois women will always have the right to make their own medical decisions – regardless of what [President] Donald Trump, his right-wing judges and extreme politicians in other states do,” House Speaker Michael Madigan, a Chicago Democrat, said in a statement.

During floor debate Tuesday, Cassidy had a scripted back-and-forth with Rep. Robyn Gabel, a Democrat from Evanston. It covered topics ranging from whether the Reproductive Health Act would allow abortions to occur at any point during a pregnancy for any reason — in short, no, Cassidy answered — to who can perform an abortion — only doctors can carry out a surgical one, but physician assistants and advanced practice registered nurses can prescribe medications.

Cassidy said specifically in a few answers she was trying to establish what is known as legislative intent — if there is ever a legal challenge involving the bill and a judge finds the language to be unclear, he will turn to the General Assembly’s meaning to help him decide the case.

She went on to answer questions from lawmakers from both parties for nearly two hours. There were two phrases she repeated frequently: the Reproductive Health Act “does not change the current standard of practice” and “doctors are required to adhere to accepted standards of clinical practice.”

The bill mandates private insurance companies regulated by the state must cover abortion procedures if they also provide coverage for pregnancy benefits. One of the changes to this most recent version of the legislation allows companies to employ cost-sharing provisions, such as co-payments, but only if it does so for pregnancy-related coverage as well.

It also repeals several protections in current statute for health care professionals who have a moral, ethical or religious objection to abortion and refuse to participate in the procedure. It leaves one in place, the Health Care Right of Conscience Act. Through an amendment, proponents say that law would be strengthened.

A legal analysis prepared by the Thomas More Society, a conservative Chicago-based law firm, when the measure was first introduced pointed to a sentence — “A fertilized egg, embryo, or fetus does not have independent rights under the laws of this State” — that might unintentionally undermine statutory actions and aspects of Illinois’ criminal code.

That is because that language “may call into question whether actions for prenatal injuries or wrongful death may be maintained,” according to the memo.

“I think it would be a compelling argument to urge that a person should not be put in prison for decades for terminating the life of a thing that has no rights and whose humanity is denied by statute. Our laws up to this point had presumed the unborn are human and are of great value in that,” Peter Breen, the law firm’s vice president and senior counsel, said. “I’m not saying the argument works, but at some level, the punishment must fit the crime.”

Proponents argue that is not the case, though.

In addition, the measure repeals several aspects of current law that courts have blocked, including criminal penalties for doctors and spousal consent.

“The bill empowers every person in Illinois to make the most personal medical decisions in consultation with their physician. Everyone deserves that right. The House recognized this and saw the urgency in protecting this basic health care,” Colleen Connell, executive director of the Illinois chapter of the American Civil Liberties Union, said in a statement. She testified with Cassidy before a legislative panel Sunday night.

Rep. Avery Bourne, a Republican from Raymond, spent the most time Tuesday questioning Cassidy. She closed by pointing out the Reproductive Health Act does not need to become law for abortion to remain legal in Illinois — a bill signed by former Gov. Bruce Rauner allowing tax dollars to be spent on the procedure included language that achieved that.

“This is about a massive expansion that will impact viable babies, and that is wrong,” Bourne, who is pregnant, said. Her voice wavered with emotion when discussing abortions that occur late in a woman’s pregnancy.

The Catholic Conference of Illinois, a group that represents the state’s six dioceses, said in a statement the bill is more than “cleanup” legislation as described by advocates.

“Illinois has previously distinguished itself by recognizing and upholding human dignity. It has welcomed and defended the rights of immigrants and refugees, and eliminated the death penalty,” the statement read. “It is therefore incomprehensible to us that the General Assembly has prioritized denying protection to the most vulnerable among us by enacting some of the most liberal abortion access laws in the nation.”

A Senate panel is expected to hear debate on the bill soon, as the scheduled end of session is Friday.