With just over a week before session is scheduled to end, a bill rewriting Illinois’ abortion law is given a second chance

Published by Capitol News Illinois on May 22, 2019 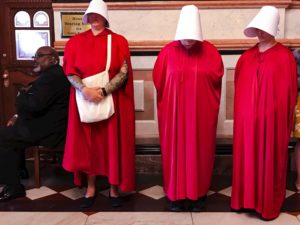 Women dressed as Handmaids, characters from Margaret Atwood’s dystopian novel, “The Handmaid’s Tale,” stand by as House Democrats meet on the other side of the door to discuss the future of the Reproductive Health Act on Wednesday, May 22, at the Capitol in Springfield. (Capitol News Illinois photo by Rebecca Anzel)

SPRINGFIELD — A measure that would rewrite Illinois’ abortion statute — the subject of months-long debate among advocates on both sides but not lawmakers — is moving out of legislative limbo after months of inaction.

The House Democratic caucus met for about two hours Wednesday, in part to discuss the Reproductive Health Act, a bill backers and detractors agree would be the most progressive reproductive health care law in the country if enacted. The meeting was a chance for representatives to ask pointed questions about the legislation.

Speaker Michael Madigan, D-Chicago, concluded the session by “making clear that they were going to find us a new vehicle for the bill” and it would be assigned to a committee in the coming days, Rep. Kelly Cassidy, also from Chicago, said.

Neither Cassidy, the measure’s sponsor, nor Madigan’s spokesperson would comment on what questions legislators asked during the caucus’s meeting. But Cassidy said overall, the conversation went well.

She said particularly because the bill had been held in committee and was not allowed to be discussed, “this opportunity for folks to get their questions answered was really important.”

When Cassidy introduced the Reproductive Health Act in February, it received much attention from proponents and opponents. But the bill was almost immediately sidelined from debate in the same subcommittee as the other roughly 10 reproductive health care and abortion-related measures introduced this session by the panel’s chairwoman, Chicago Rep. Frances Ann Hurley.

She controls whether bills advance from her committee to the full chamber, and it is unclear why Hurley decided to halt the progress of all measures pertaining to reproductive health care and abortion.

Rep. Emanuel “Chris” Welch, a Hillside Democrat, is the chair of the Executive Committee. He did not return a request for comment on Wednesday’s caucus meeting, but he attended a rally May 15 where he called for the Reproductive Health Act to be posted to his committee this week.

The rally was held by Cassidy and Senate sponsor Melinda Bush, a Democrat from Grayslake, just outside the Capitol to urge the House Democrats to take action on the bill. Also in attendance were numerous representatives and senators.

The recent push by states such as Alabama, Georgia and Missouri to restrict access to abortion has spurred the need for action in Illinois, said Cassidy and Brigid Leahy, senior director for public policy for Planned Parenthood of Illinois.

Some of those states aim to get their law before the U.S. Supreme Court in the hopes of overturning Roe v. Wade, the 1973 case legalizing abortion nationwide. Leahy added that before the recent ramp-up of states passing such statutes, there were about 20 cases restricting abortion that were also on track to the nation’s highest court.

“I think that the recent acceleration of hostile legislation in other states has certainly helped some members who didn’t necessarily think that this was imperative to do right now, to realize that this is a looming threat that we have to address,” Cassidy said.

With just over a week to go before the scheduled end of session, the General Assembly still needs to approve a budget and fill revenue holes by considering the legalization of recreational marijuana for adults, passing new taxes and expanding legalized sports betting. But Leahy said approving the Reproductive Health Act is just as important given the national climate.

“We at Planned Parenthood have switched, and really since [Supreme Court Justice Brett] Kavanaugh went on the court, it’s no longer if Roe v. Wade is overturned or undermined, it is when,” she said. “And we anticipate that the Supreme Court will take up a serious challenge to Roe within the year…so we can’t wait for next year’s session to come around. We have to do this now, and this is because of external forces.”

Robert Gilligan, executive director of the Catholic Conference of Illinois, said he thinks it is good to talk about these issues, but his group is “just as energized to continue espousing our opposition.”

It is unclear when the Reproductive Health Act will be assigned to a committee and what form it will take. Session is scheduled to conclude May 31.