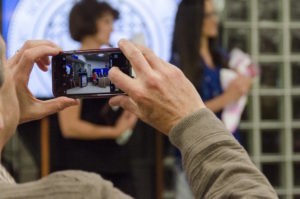 The husband of Felice Silverman, a retiring special educator at the East Hills School, takes a photo while his wife is honored at Thursday’s Roslyn school board meeting. (Photo by Rebecca Anzel)

Eight teachers from East Hills School, Roslyn Middle School and Roslyn High School were honored with speeches by their principals and plaques from the school board thanking each educator for their years of dedication to Roslyn students.

Some of Antoniades’ students said how helpful and caring she is when helping them with homework in subjects such as grammar, subtraction and counting coins. Silverman’s students commented on her friendly demeanor and how they always learn something new from her.

“How fortunate the children have been to be able to benefit from her kind nature, patient manner and willingness to give her all,” Krieger said of Antoniades. “Barbara’s smile is contagious and is a welcoming sight at East Hills.”

Johanson spoke about how Fulgoni and Spivack inspired their students by sharing their passions throughout their careers at Roslyn.

He said Fulgoni loves to celebrate foreign language and discusses with her students not only where a country is but who lives there and what the culture is like.

Johanson added that Spivack, who has been in charge of the school’s mural program for many years, has helped to make the building a piece of artwork. She said she speaks to students about different media and teaches them how to express themselves through art.

When honoring Diercks and Gidwill, Johanson focused on their lasting impact on students.

He said that when he speaks to alumni who are in their 40s or older and asks who their favorite teacher was or what they remember they most, they respond with Diercks’s name.

Johanson called Diercks an “integral part” of the lives of not only former students, but current ones and colleagues as well.

“We are going to miss him, but most of all, kids are going miss him because his students love him and he loves the kids,” Johanson said. “Every single day you see it, you hear it and you feel it and that what makes Mark Diercks so special.”

Gidwill was the only retiree to have a former student at the ceremony, which Johanson said spoke to what a “truly special person” she is and the effectiveness of acting as an advocate for each of her students.

Gidwill will be a substitute teacher on Tuesdays, Wednesdays and Thursdays next year.

“She is a truly special person,” Johanson said. “For a student to come back at this point in her life to honor her, it means that Susan has touched so many.”

A common theme among Braun’s fellow students was her tendency to go out of her way to help anyone who needed it, even if it meant taking on more work.

Many of her students said Braun was able to help calm them down when they were stressed and seemed to care more about their success than sometimes they did.

Roslyn students were also recognized at the meeting Wednesday for their achievement at the Long Island String Festival, All County Music Festival and Al Kalfus Long Island Math Fair.

“We don’t just dabble in the things we do, we do them really very, very well,” Meryl Waxman Ben-Levy, the school board president, said. “And for those of us who only appreciate contests, make no mistake, the math fair and the music evaluations are every bit a competitive sport that athletics are.” 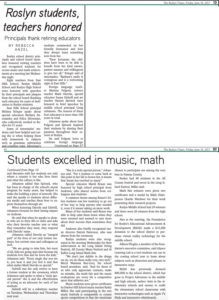 The Roslyn Times published this piece in print on Friday, June 16, 2017.

Music students were given certificates by Harbor Hill School music teacher Kathy Miller. She said participating in the two music festivals is comparable to county sports competitions in that the musicians chosen to participate are among the very best in Nassau County.

Roslyn had 40 students in the All County festival and seven in the Long Island festival, Miller said.

Math Fair winners were given two certificates and a medal by Math Chairperson Charlie Windwer for their work presenting their research projects.

Roslyn Middle School had 29 winners and there were 26 winners from the high school.

Also at the meeting, the Foundation for Roslyn’s Educational Advancement & Development(READ) made a $15,000 donation to the school district to purchase a virtual reality technology for the middle school.

Allison Fliegler, a member of the foundation’s executive committee, said zSpace Learning Lab is a tool students will be able to use in the upcoming school year to learn about subjects such as dissection and planets in immersive ways.