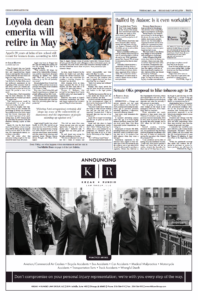 The Chicago Daily Law Bulletin published this piece in print on Tuesday, May 01, 2018. See the jump below.

Published by the Chicago Daily Law Bulletin on May 01, 2018

A measure preventing anyone under the age of 21 from buying tobacco products passed the Senate along party lines. Only three Democrats joined Republicans in voting no.

Proponents of Senate Bill 2332, including Democratic sponsor Julie Morrison, point to research showing nine out of 10 smokers first tried tobacco when they were a teenager.

Republican opponents to the measure have argued in floor debates that if 18 is old enough to join the military, vote or get married, it should be old enough to purchase a cigarette. Others also referred to the Department of Revenue, which estimated Illinois will lose $41 million to $48 million in proceeds from cigarette and sales tax annually if the measure is successful. 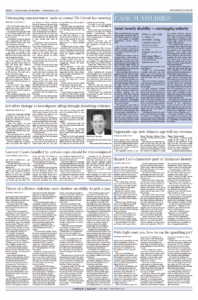 The jump is in the right column above the fold.

“Are we going to balance the state budget on the lungs of our teenagers,” Morrison, from Deerfield, asked in response.

Those arguments are nearly identical to ones made when the Tobacco 21 initiative came before previous General Assemblies. Both in 2016, when it passed the Senate by nearly the same margin, and in 2017, when the bill died in the House.

Several senators, including Rockford Republican Dave Syverson, also questioned why Morrison removed language specifying a $50 fine and 25 hours of community service for any minor who violated the proposed law.

“I am perplexed at the idea of taking away any sanctions,” he said. “Under this, when you’re making it illegal and these kids will try to smoke, where’s the incentive for them not to? All they have to do is try to get it, just like they do with illegal drugs — except if they get caught with [tobacco products], there’s no consequences for it.”

Municipalities have a “strong demand” for the bill, though, Carolyn Cerf, government relations director for the American Heart Association, said. Twenty-three local governments approved it so far with Peoria being the latest to do so last Tuesday night.

Evanston and Chicago were the first two proponents of the idea, in 2015 and 2016 respectively. Since then, teen smoking rates have decreased 35 percent, Cerf said.

A statewide ban would be even more effective, Lake County Health Department Executive Director Mark Pfister said. His county was the 12th local government to pass the Tobacco 21 initiative. It went into effect at the beginning of the year.

“While the patchwork coverage that exists now reduces the potential to purchase or access tobacco products, we will have far greater success with a statewide ban in achieving our goal to prevent youth from initiating using tobacco products, which continue to be a leading cause of death and illness,” he said in an e-mail.

The legislation arrived in the House Thursday. Chicago Democrat Rep. Camille Lilly is the chief sponsor.

She could not be reached for comment late last week. But Lilly, who has a background in health administration, told the Daily Law Bulletin earlier this year that Illinoisans want the Tobacco 21 initiative to make Illinois a “better society.”

“The beauty of different people picking up this charge is an indication of the importance of this issue,” she said. “The issue is being talked about and addressed and advocated for across categories of our society. That means something.”