Bush: ‘I’m really fighting for women that are coming after me’

Published by Capitol News Illinois on May 30, 2019 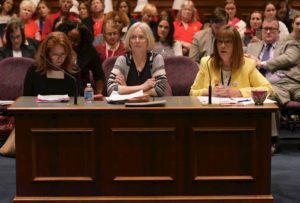 Testifying Thursday at the Capitol in Springfield during a Senate committee hearing on the Reproductive Health Act are (from left) Amy Whitaker, medical director of Planned Parenthood of Illinois; Colleen Connell, executive director of the Illinois chapter of the American Civil Liberties Union; and Sen. Melinda Bush, D-Grayslake. Bush is the bill’s sponsor in the Senate. It was advanced by the committee on a party-line vote. (Photo courtesy of Illinois Senate Democrats)

SPRINGFIELD — It took fewer than 30 minutes of testimony and debate for a panel of state senators to advance a measure overhauling Illinois’ abortion statute to the full chamber Thursday morning. The bill received support from only Democrats.

The Reproductive Health Act repeals the state’s law regulating abortion procedures and replaces it with a reproductive health measure backers and detractors agree would be the most liberal in the nation.

Sen. Melinda Bush, a Democrat from Grayslake and the bill’s sponsor, said she felt “relieved” her colleagues voted to progress the legislation.

“We absolutely have to protect women’s reproductive health in the state of Illinois as we see these states that one after another are passing some of the most restrictive laws we’ve ever seen,” she said after the committee hearing. “I’m ready to continue the fight on behalf of women and families.”

The legislation would establish access to reproductive health care as a fundamental right, meaning the state would be barred from blocking a woman or man’s access to diagnostic testing, contraception, pregnancy benefits, abortion procedures or other related benefits.

Such rights also include those enshrined in the Bill of Rights in the U.S. Constitution, or ones identified by the nation’s highest court as needing strong safeguarding from government interference.

Republican Sen. Dan McConchie, from Hawthorn Woods, asked during Thursday’s meeting why this measure made access to abortion procedures a fundamental right, when “Roe v. Wade states that abortion is not an absolute right.”

“It’s basically the right of every person to make and effectuate decisions about their own health care and that has been recognized as fundamental by the courts, not just the federal courts but also the state courts,” Colleen Connell, executive director of the Illinois chapter of the American Civil Liberties Union, said.

Christopher Manson, vice president of Government Relations for OSF Healthcare, testified that what his group is “most concerned about” is being forced to cover abortion procedures through its insurance plans.

The Reproductive Health Act mandates insurance companies regulated by Illinois provide abortion coverage if they also provide coverage for pregnancy-related benefits. An amendment was added to allow for cost-sharing provisions, such as co-payments.

“Small faith-based employers would be provided no exemption, especially given the fact that abortion will now be a fundamental right should (this bill) become law,” Manson said.

Bush pushed back. She said because the legislation leaves in place and strengthens the Health Care Right of Conscience Act, churches and religious employers would not have to cover abortion procedures.

McConchie asked Bush if a discussion on this topic could continue on the Senate floor when the Reproductive Health Act was called for a vote, presumably so Bush could establish what is known as legislative intent — if there is ever a legal challenge involving the measure and a judge finds the language to be unclear, he will turn to the General Assembly’s meaning.

“I’m certain that there will be questions about intent,” Bush said.

Sen. John Mulroe, a Democrat from Chicago, asked for clarification on the latest point in a pregnancy that a woman could get an abortion procedure if this measure became law, given the “misinformation out there being disbursed everywhere.”

“Two-thirds of all abortions happen before eight weeks, 89 percent happen before 12 weeks, and less than 1 percent happen after 24 weeks — to characterize abortion care by those extreme situations is neither accurate nor medically correct,” said Amy Whitaker, medical director of Planned Parenthood of Illinois.

Chicago Democratic Rep. Kelly Cassidy, the act’s House sponsor, was sitting in the front row of spectators behind Bush as she testified for part of the committee hearing. The Reproductive Health Act passed through that chamber Tuesday, after a lengthy, passionate and, at times, emotional debate.

Bush was on the floor of the House to hug Cassidy when the measure succeeded there, and Cassidy said she intends to watch the Senate debate when the act comes up for a vote before the scheduled end of session Friday “if for nothing else but to be there to hug her the way she hugged me when we finished.”

Proponents of the legislation cite recent action by states such as Alabama, Georgia, Ohio, Missouri and Louisiana to pass abortion restriction statutes as proof why Illinois needs the Reproductive Health Act to become law.

Some of those other states hope to get their initiatives before the U.S. Supreme Court to challenge Roe v. Wade, the 1973 case that legalized abortion nationwide.

“The (Reproductive Health Act) proposal stands in stark contrast to the wave of radical abortion bans sweeping the nation – treating maternal care, contraception and abortion care as health care,” according to a statement by the ACLU after the Senate legislative panel’s action to advance the measure to the full chamber.

“I’m really fighting for women that are coming after me,” Bush said Monday. “They shouldn’t have to have children when they’re not ready to.”