Bill would apply to public colleges and universities 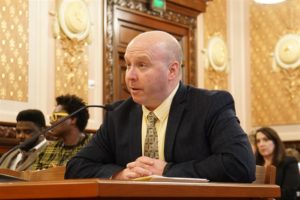 Sen. Tom Cullerton, D-Villa Park, says going away to college can be a “trying and stressful time” for students. A bill he sponsors would require public universities and colleges to publish mental health resources on the back of all identification cards. It was discussed Tuesday during a Senate Higher Education Committee hearing at the Capitol in Springfield. (Photo by Lee Milner, Illinois Times)

As a parent of a first-year college student, Villa Park Democratic Sen. Tom Cullerton said it is a “trying and stressful time,” as with any other parent who misses their child. But he said such situations are also difficult for the student, who may be away from home for the first time.

His initiative would ensure phone numbers for the National Suicide Prevention Lifeline, Crisis Text Line and the school’s mental health counseling center are published on each student’s identification card.

If an institution of higher education does not have such cards, the bill requires that information be published on its website instead.

“Students are constantly required to use their student ID card to access sporting events, dorm rooms or utilize their meal plan,” Cullerton said. “Ensuring these lifesaving helplines are easily accessible can be the difference between life and death.”

According to the Centers for Disease Control and Prevention, suicide was the second leading cause of death for youth ages 15-24 in 2017.

Adding such mental health resources is a “simple step” universities and colleges “can take to save lives,” Cullerton said.

Those public institutions in Illinois, though, asked that he amend the measure to postpone its effective date from July 1, 2021, due to financial concerns. Cullerton said he agreed, and plans to allow for universities and colleges to issue the identification cards with resource contact information with each new class, or when a student needs a new card after losing theirs.

“My goal is definitely not, with our budget crises in the last few years, to have this be an impediment,” he said. “Every university seems to be on board with it.”

Cullerton has a nearly identical bill for high school identification cards. It has not been assigned to a substantive committee.