Published by Capitol News Illinois on May 07, 2019 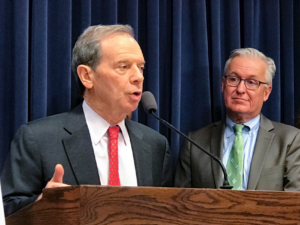 Senate President John Cullerton speaks during a news conference Tuesday at the capitol in Springfield about his support for a $1-per-pack tax increase on cigarettes in Illinois as well as tax increases on other tobacco products. Standing with Cullerton is Dr. Douglas Carlson with the Illinois Chapter of the American Academy of Pediatrics. (Capitol News Illinois photo by Rebecca Anzel)

In a proposal supported by anti-smoking advocacy groups, the Chicago Democrat said he will introduce legislation to raise the tax on a pack of cigarettes by $1, to $2.98. That is about triple the 32 cents Gov. J.B. Pritzker initially proposed in his February budget outline.

Cullerton also would include a bump in taxes on all other tobacco products — cigars, chewing tobacco and snuff, to name a few — by 64 percent of the wholesale price.

“Many of the bills that we vote on in Springfield deal with money and in fact, I would say most of them do. Since I’ve been here, the bills that I’ve been most interested in working on are bills that you can vote on where you actually save lives,” the Senate president said. “This is another example of that. …That is about the most rewarding thing anybody can do in the Legislature.”

But the plan would also save the state money in long-term health costs, as well as provide an incentive for current smokers to quit and potential smokers not to start.

The American Cancer Society’s Cancer Action Network commissioned a survey to poll voters about the favorability of the tax increase. It found 58 percent of Illinoisans support the $1 proposal. But when given information about the state’s budget deficit, and that the revenues generated from the tax increase might help pay that down, the support grew to 66 percent.

The poll also found voters prefer the $1 increase over the governor’s 32 cent proposal by a 2-to-1 margin.

Pritzker is counting on the General Assembly to pass a slew of new or heightened taxes to make his budget work, including those on plastic bags. His budget also needs revenue from the legalization of recreational marijuana, and expansion of the state’s sports betting industry.

“It’s going to be tough to pass some of these bills that raise revenue, but there’s one revenue-raiser — the cigarette tax, and for that matter, e-cigarette taxes — where the public actually supports a tax increase. There’s not very many of those,” Cullerton said. “This is probably the only one that comes to mind, so when all those things converge, it makes it really obvious that this is what we should be doing.”

“[Lawmakers] keep preaching small businesses are the backbone of a community, but that’s not reflected in the legislation they’re considering,” he said.

He pointed out this proposal comes after Pritzker signed a law increasing the state’s minimum wage to $15 per hour by 2025, and another that raises the legal age to purchase tobacco products to 21.

Fleischli added Illinoisans might purchase cigarettes and other tobacco products from neighboring states, such as Missouri, where the taxes are lower.

But Cullerton said that is an argument that is brought up frequently by opponents on all sorts of tax legislation.

“But what we also know is that other states then see what we do and then they can go and change their own rate, their own laws,” he said. “And so, it has somewhat of an effect, but it’s not enough of a reason to not do a statewide change in my opinion.”

A spokeswoman from Pritzker’s office said “the governor supports President Cullerton’s proposal and looks forward to ongoing negotiations with lawmakers in the Senate and House.”