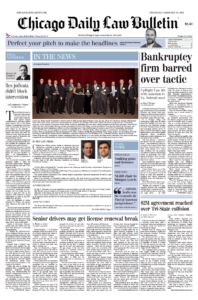 The Chicago Daily Law Bulletin published this piece in print on Thursday, Feb. 22, 2018.

Published by the Chicago Daily Law Bulletin on Feb. 22, 2018

Under current state law, drivers above the age of 75 not only need to have their vision checked when renewing their license in person, but must also take a driving test.

Rep. Joe Sosnowski, a Republican, proposed House Bill 5491 to make the renewal process easier for seniors by eliminating the need for the driving test. Illinois, he pointed out, is the only state with such a requirement.

“Some states have an automatic driving test, but it’s only triggered if somebody had an accident or there’s been some concerns, but here, we’ve been automatically requiring people that get a little bit older to go through that,” Sosnowski said. “These could be people with perfect driving records, but just because they’re in their 70s, all of the sudden we’re saying they have to go every year for a driving test.”

Drivers between the ages of 75 and 80 are required to renew their licenses every four years, 81 through 86 every two years and annually for drivers 87 and older. Each time, they need to pass vision and road tests.

Sosnowski added the current program qualifies as “age discrimination” and said part of his motivation for proposing legislation to eliminate it is to protect the state from a lawsuit.

Arthur R. Ehrlich, a partner at Goldman & Ehrlich, said as long as the state did not pick “a random age out of a hat” and could prove the age ranges in the law were chosen for a scientific reason, it could survive a challenge.

The program was enacted before Secretary of State Jesse White took office in 1999, but his spokesman said it contributes to safer roads.

“The fact of the matter is that we lose some of our skills as we get older — our timing, our vision, our coordination to some degree — and we always want the roads to be as safe as possible,” Dave Druker said. “We really think that the retesting adds to that safety.”

Institute spokesman Russ Rader added that this same trend was not found with data from New Hampshire, which repealed a similar law in 2011 after officials there found it to be ineffective.

“The only thing that we know that has been shown to work are regulations requiring in-person renewal and requiring vision testing where in-person renewal is not required — those are the policies we’ve found are associated with lower fatality rates among drivers 85 and older,” Rader said. “It’s a mixed bag when you look at other kinds of restrictions.”

Both Rader and attorney Frank P. Venis, founding partner at Venis & Copp LLP, said older drivers as a demographic are more likely to self-regulate as they recognize impairments and difficulties in driving, such as driving less at night or in unfamiliar areas.

“There’s lots of ways to stereotype people but the truth is that older people tend to drive cautiously, and that’s more important than having the reflexes of a younger person,” Venis said.

Rader added it is conceivable, though, Illinois’ restriction is “weeding out” older drivers with the most serious impairments because “an older driver may simply give up driving rather than go through the stress of going into the DMV.”

To combat that, Druker said the secretary of state’s office has frequent outreach programs to explain and help prepare senior drivers for what they would have to do to pass the road test.

“We try to be very sensitive to people,” Druker said. “We don’t want anybody to feel that they shouldn’t be driving if they’re fully capable of it, so we work with senior groups to offer classes and reassure them.”

Sosnowski said his other motivation for proposing to eliminate the requirement is to save the state money. Illinois’ current bill backlog is more than $8.5 billion, according to the state comptroller’s website.

“Of course if older drivers have to go in for a driving test frequently, it costs them the price of going in,” he said, “but then we have to staff all these extra people to mandate these extra tests for driving, and so it’s extra payroll costs for us.”

Illinois Sheriffs’ Association Executive Director Jim Kaitschuk said the group does not have a position on the bill.

Representatives from the Illinois Association of Chiefs of Police and AARP-Illinois could not be reached for comment by time of publication.