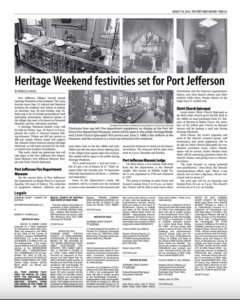 Port Jefferson Village’s second annual Heritage Weekend is this weekend. The event features more than 15 cultural and historical locations for residents and visitors to explore on Saturday, Aug. 20 and Sunday, Aug. 21. Each stop is set to include presentations with interesting information, historical photos of the village that used to be known as Drowned Meadow, and fun, interactive activities.

A Heritage Weekend kickoff event will be held on Friday, Aug. 19 from 6 to 8 p.m. aboard the Lettie G. Howard historic fishing schooner. Tickets are $45 per person or $80 per couple. Money raised will support the cultural events featured during Heritage Weekend, as will funds donated by the Robert David Lion Gardiner Foundation.

This week, check out attractions that will take place at the Port Jefferson Fire Department Museum, Port Jefferson Masonic Temple and Christ Church Episcopal. Check out parts one, two and three of our Heritage Weekend preview series. 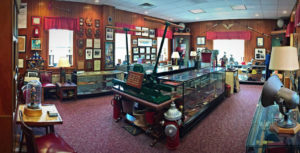 The Port Jefferson Fire Department Museum will be open to the public during Heritage Weekend. Photo by Jill Russell. 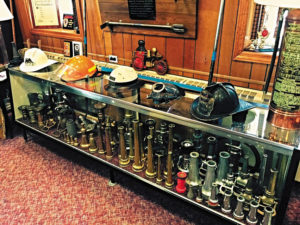 Fire department equipment on display at the Port Jefferson Fire Department Museum, which will be open to the public Heritage Weekend. Photo by Jill Russell.

On the second floor of Port Jefferson’s fire department on Maple Place is a museum housing 130 years of history. The collection of equipment, helmets, uniforms and pictures dates back to the late 1800s and early 1900s and tells the story of how fighting fires in the village’s four square miles has evolved. The exhibit will be open to the public during Heritage Weekend.

“It’s a small museum — just one room — but it’s got a lot of history in it,” Third Assistant Chief Jim Sarubbi said. “It represents what this department is all about — tradition and dedication.”

Some of the department’s nearly 100 members will be on hand over the weekend to escort event attendees to the museum and around the firehouse to check out the historical artifacts. The museum will be open from noon to 4 p.m. Saturday and Sunday.

The freemasons’ purchased their current building, which was constructed in 1854, from the Presbyterian Society in 1912. Photo courtesy of Suffolk Lodge Number 60.

On Main Street, a two minute walk away from the fire department, is the Masonic temple. Also known as Suffolk Lodge No. 60, it was organized in 1796 and chartered in 1797.

The group is hosting an open house and Q-and-A session from 6 to 8 p.m. on Saturday. Visitors will be able to learn more about Freemasons and the fraternal organization’s history, and view historic photos and other artifacts while there, former Master of the lodge Gary D. Gudzik said.

Locals know Christ Church Episcopal as the little white church up on the hill. Built in the 1880s on land purchased from P.T. Barnum of Barnum & Bailey Circus, the members of the yellow pine church on Barnum Avenue will be hosting a yard sale during Heritage Weekend.

Irene Choate, the event’s organizer and head of the church’s women’s group, said housewares and small appliances will be on sale in Christ Church Episcopal’s air conditioned recreation room, where refreshments will be served. Senior Warden Gene Seiler will be answering questions about the church’s history and giving tours to interested visitors.

“We look forward to seeing potential new parishioners,” Joyce Bock, the church’s communications officer, said. “We’re a tiny church, but we have a big heart. All are welcomed and we mean it.”