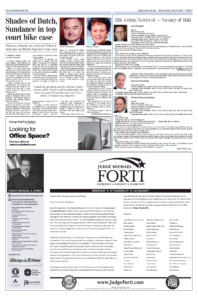 The Chicago Daily Law Bulletin published this piece in print on Friday, March 16, 2018.

Published by the Chicago Daily Law Bulletin on March 16, 2018

SPRINGFIELD — A lawyer arguing before the state’s highest court likened her client’s case to the 1969 film “Butch Cassidy and the Sundance Kid.”

There is a scene where Paul Newman, one of the movie’s stars, takes Katharine Ross’ character for a ride on his bicycle. Over the next few minutes, Newman executes tricks, such as riding backward and putting one of his feet on the seat with the other in the air.

“While I thought this was for entertainment, I now realize Paul Newman was just trying to determine if his bike was a motor vehicle,” Francis L. Thomas, the attorney, said.

“And there’s 500 people out there trying to determine who is Paul Newman,” Justice Robert R. Thomas said, eliciting laughter from the audience.

The case is one of two the state’s Supreme Court heard at the University of Illinois at Urbana-Champaign on Thursday to better show the public what the court does. It was the first time such an event was held since 2016, when the justices traveled to Benedictine University in Lisle.

John Plank, the appellee, was pulled over in August 2016 just south of Champaign for driving 26 miles per hour on a motorized bicycle. He was later charged with operating a motor vehicle while his license was revoked which, based on his prior convictions, qualified as a Class 4 felony.

The case rests on whether Plank was driving a low-speed gas bicycle or a motor vehicle, and whether the statute is too vague to enable an average person to figure out the difference.

According to Section 1-140.15 of the Vehicle Code, a low-speed gas bicycle is a “2- or 3-wheeled device with fully operable pedals and a gasoline motor of less than one horsepower, whose maximum speed on a paved level surface, when powered solely by such a motor while ridden by an operator who weighs 170 pounds, is less than 20 miles per hour.”

Eric M. Levin, assistant attorney general, argued Plank violated the law either way — he either was riding a low-speed gas bicycle faster than the speed limit allows or he was driving a motor vehicle without a valid license or registration.

The state also contended the maximum speed component is “technical” but fair and that it is incumbent upon the operator of a vehicle to follow the law or to determine what that vehicle qualifies as.

“It’s complex, and it may in some instances may be difficult to apply, certainly immediately and without doing any sort of investigation and inquiry,” Levin said. “But what matters for purposes of the void for vagueness doctrine is that the definition allows no room at all for anybody to employ any subjective judgments.”

Thomas, Plank’s attorney, said she disagreed with that point, and Chief Justice Lloyd A. Karmeier and Justice Rita B. Garman pressed her about the nature of what her argument truly was and to whom her argument applies.

“Isn’t it really true you’re saying that the statute, although you argue it’s vague, it’s really very specific but it might be difficult to ascertain those objective standards that are set out?” Karmeier asked.

“I believe that’s correct,” Thomas replied. “I think the specificity and the objective nature of some of the criteria could be misleading, but when you put it all together and read it as a whole, it becomes very subjective.”

The application of the law is subjective to an average person, she clarified in response to a question by Garman, and to law enforcement.