Snuffing out cigarette sales to those under 21? Fourth time could be a charm 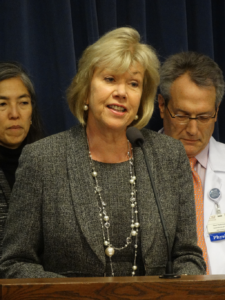 Sen. Julie Morrison, a Democrat from Deerfield, says raising the minimum age to purchase tobacco products in Illinois will reduce the state’s health care costs by millions of dollars at a news event in Springfield. This issue is personal to her, she said, because her father began smoking at 14 and died at 57. (Capitol News Illinois photo by Peter Hancock)

SPRINGFIELD — Efforts to raise the minimum age to purchase tobacco products in Illinois have been slowly spreading across the prairie state. Its supporters are “cautiously optimistic” the most recent legislative iteration, the fourth attempt in as many years, will find success this session.

A pair of newly-filed bills would prevent anyone under the age of 21 from buying tobacco products — cigarettes, e-cigarettes, vapes, chewing tobacco, to name a few — in an effort to curb early addiction.

Democrats Julie Morrison, a senator from Deerfield, and Camille Lilly, a representative from Chicago, are sponsoring the measures in their respective chambers. Republican Rep. Tim Butler from Springfield is a chief co-sponsor.

“I think the momentum is behind us — you’re seeing a groundswell in communities across the state and it’s taking hold in the Legislature,” Butler said. “I do expect it to become law this year. If we can do things, especially to help youth lead healthy lives, I think that’s a good thing.”

Each time the Tobacco 21 legislation was introduced, it inched closer to becoming law. Most recently, it passed both chambers with mostly Democratic support, but was vetoed by Republican Gov. Bruce Rauner.

In his message to lawmakers, Rauner wrote he agreed smoking is “detrimental to the health of Illinoisans of all ages,” but said it could cause unintended economic repercussions.

It is unclear on what data he was relying to base his decision.

“The governor believes in order to help build a healthy society we have to work to prevent young people from smoking,” she said in an emailed statement. “He looks forward to reviewing the legislation to raise the smoking age.”

Because a statewide effort has thus far been unsuccessful, some local governments have made the change at their level. The result is a patchwork of about 36 ordinances, covering about one-third of the state’s population, according to Kathy Drea, the American Lung Association’s senior director for Advocacy.

Evanston was the first proponent, in 2014. Since then, the teen smoking rate decreased 35.5 percent there, according to the American Heart Association.

As the legislation’s advocates and Senate sponsors prepare for a committee hearing Tuesday, they are planning for the same arguments that arise each time the initiative is proposed.

Opponents, typically Republicans, argue that if 18 is old enough to vote, get married or join the military, it should be old enough to purchase a cigarette. In the previous session, others referred to a Department of Revenue estimate that Illinois would lose $41 million to $48 million in annual proceeds from cigarette and sales taxes if the legislation were successful.

Julie Mirostaw, senior director of Government Relations for the American Heart Association, said the Department of Defense has plans to go tobacco-free by 2020 and already does not allow use of products containing nicotine in basic training.

In the previous legislative session, a group of retired admirals and generals called Mission: Readiness had a news event to advocate, in part, for the passage of this initiative because they said it would aid in the ability of the military to get physically-fit recruits.

Mirostaw also said staff at the Heart Association believes the Department of Revenue inaccurately calculated the amount of money Illinois would lose if the measures were successful. One example, she said, was their assumption that teenagers purchase cigarettes at the same rate as lifelong smokers.

And according to a Campaign for Tobacco-Free Kids memo, the loss of revenue would be only about $2 million, or 0.28 percent of Illinois’ cigarette tax revenue.

Tobacco 21 sponsors also received criticism for their decision to remove language specifying a $50 fine and 25 hours of community service for anyone under 21 who violated the proposed law. That same section is again removed in this latest legislation.

Morrison and Lilly could not be reached for comment, but both Drea and Mirostaw said the reasoning is simple — kids should not be punished for a “long-known tobacco industry tactic”

“We are opposed to criminalizing kids for trying to purchase or to possess tobacco products,” she said. “We feel that the adults who are selling and making a profit should be held responsible.”

But Butler does not agree. This issue is one reason he said he wanted to be a chief co-sponsor on the measure — so he might address it with the other supporters and perhaps reach a compromise.

“There’s a good correlation” with alcohol and punishment for minors who use the substance, he said, adding that he plans to advocate for similar enforcement measures when it comes to youth tobacco use.

“I think it does need to have a little bit of teeth,” Butler said.

The Lung Association released its State of Tobacco Control Report last week. Out of five areas, it failed Illinois in four of them — taxing tobacco products, access to tobacco cessation products, funding for smoking prevention programs and a minimum age to purchase tobacco products.

The only area the Land of Lincoln scored well on was ensuring there are smoke-free areas, such as schools, restaurants, stores and gambling establishments. The report noted e-cigarettes are not included in these areas, though.

The measures are Senate Bill 21 and House Bill 345. Only the Senate version has been assigned to a substantive committee. The House version is stuck in the early stages of the legislative process.