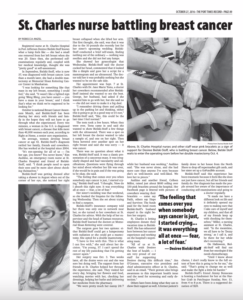 Registered nurse Desiree Bielski-Stoff knows what a lump feels like — she had a small one removed from her left breast when she was 20. Since then, she performed self-examinations regularly and, coupled with her medical knowledge, thought she was “pretty good” at self-assessment.

In September, Bielski-Stoff, who is now 37, was diagnosed with breast cancer. Less than a month later, she had a double mastectomy at Memorial Sloan Kettering Cancer Center in Manhattan.

“I was looking for something like that mass in my left breast, something I could feel,” she said. “It wasn’t like a lighted sign going ‘Bling Bling, you have cancer — you have a mass in your breast,’ and I think that’s what we think we’re supposed to be looking for.”

October is national Breast Cancer Awareness Month, and Bielski-Stoff has been sharing her story with friends and family in the hopes they will not have to go through what she experienced. Every two minutes, a woman in the U.S. is diagnosed with breast cancer, a disease that kills more than 40,000 women each year, according to Right at Home, a senior care organization.

On average, women develop breast cancer at age 61. Bielski-Stoff’s diagnosis rattled her family, friends and coworkers. She has worked at the hospital since 2004.

“It’s eye-opening for all of us — I’m her age, you know? You never know,” Kim Audiino, an emergency room nurse at St. Charles Hospital and friend of Bielski-Stoff, said. “I think people need to open their eyes and be more alert about checking themselves.”

Bielski-Stoff was getting dressed after taking a shower in August when out of the corner of her eye, she noticed her right breast collapsed when she lifted her arm. Her first thought, she said, was that it was due to the 10 pounds she recently lost for her sister’s upcoming wedding. Bielski-Stoff conducted a brief self-exam, finding nothing out of the ordinary — nothing was swollen and she did not feel any lumps.

She showed her gynecologist that Wednesday. Bielski-Stoff said the doctor cocked her head, commented that it looked like a dimple and gave her a script for a mammogram and an ultrasound. The doctor told her it was probably nothing but she wanted to be on the safe side.

Her appointment was Sept. 7 at St. Charles with Dr. Jane Marie Testa, a doctor her coworkers recommended after Bielski-Stoff insisted she wanted to see the best. George, her husband, had asked if she wanted him to go with her, but she said no — she did not want to make it a big deal.

“I remember driving there and pulling up in the parking lot and thinking, either this is going to go in a good way or it’s not,” Bielski-Stoff said, “like, this could be the last time I feel normal.”

There was no question about what it was, Bielski-Stoff said. It was a classic presentation of a cancerous mass. It was irregularly shaped and had vascularity and calcifications. Questions were flying through her mind about whether her life was over, if she would be in pain and if she was going to be okay, she said.

“The feeling that comes over you when somebody says cancer is just, I started crying,” Bielski-Stoff said. “I thought, ‘How do I absorb this right now. It was everything all at once — fear, a lot of fear.”

Her sister’s wedding was that weekend, so she booked the biopsies for the following Wednesday. Then she set about trying to find a surgeon. 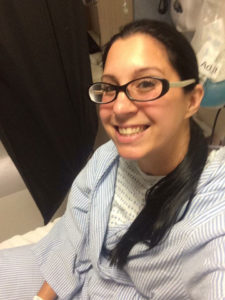 Bielski-Stoff waits to enter the operating room before her double mastectomy Oct. 4. Photo from Bielski-Stoff.

Bielski-Stoff’s insurance company told her there was only one in network near her, so she turned to her coworkers at St. Charles for advice. With the help of her supervisor and the head of human resources, Bielski-Stoff learned the doctors at Memorial Sloan Kettering were covered.

The surgeon gave her two options: either Bielski-Stoff could get a lumpectomy with radiation or she could get a mastectomy. She opted for a double mastectomy.

“I have to live with this. This is what I can live with,” she said about her decision. “I’m young, 37. I can’t spend the rest of my life panicking that I’m getting cancer again.”

Her surgery was Oct. 3. Two weeks later, all the drains were out and she was sore but doing well. The support from her friends at St. Charles helped her through the experience, she said. They visited her every day, bringing her flowers and food, watching movies with her, checking her dressings, helping her bathe and delivering her medicine from the pharmacy.

“We were pretty much her nanny 24/7 while her husband was working,” Audiino said. “She was never alone, and she had more care than anyone I’ve seen because she’s so well-known and well-liked. We love her to pieces.”

Audiino and another friend, Colleen Miller, raised just about $600 selling over 150 pink bracelets around the hospital. Her Facebook page is littered with pictures of coworkers wearing their bracelets — some say Faith, others say Hope and Survivor. The funds paid for the hotel room Bielski-Stoff’s husband stayed in the night before her surgery.

St. Charles is letting employees donate their vacation time to Bielski-Stoff. She has exhausted hers between her cancer experience and working on the hospital’s negotiating team.

“All of us at St. Charles wish Desiree the best of health — I am very proud of our staff for supporting Desiree during this difficult time,” Jim O’Connor, executive vice president and chief administrative officer at St. Charles, said in an email. “Their gesture also brings awareness to this important health issue and the need for screening and early detection.”

Others have been doing what they can to show their support as well. A former patient’s family drove to her house from the North Shore to drop off supermarket gift cards, and her sister set up a GoFundMe account.

Bielski-Stoff said this experience has been traumatic because it feels like she does not just have cancer, but all her friends and family do. Her diagnosis has made the people around her aware of the importance of conducting self-examinations and going to a doctor regularly.

“It made me have a different look on life and it definitely opened my eyes to making sure that I take care of myself and my children, and that all of my friends keep up with checking for themselves,” Miller, a nursing assistant at St. Charles, said. “In the meantime, we all have to be ‘Dezzy strong,’ as I call it, and be there for her while she’s recovering.”

Bielski-Stoff found out on Halloween she will need four months of chemotherapy.

“That’s going to change me as well and make the fight a little bit harder,” she said.

Bielski-Stoff’s friend Jimmy Bonacasa is hosting a fundraiser for her at the Harbor Crab in Patchogue Sunday, Nov. 13, from 4 to 8 p.m. There is a suggested donation of $20.

This version was updated Nov. 1 to include Bielski-Stoff’s treatment plan. 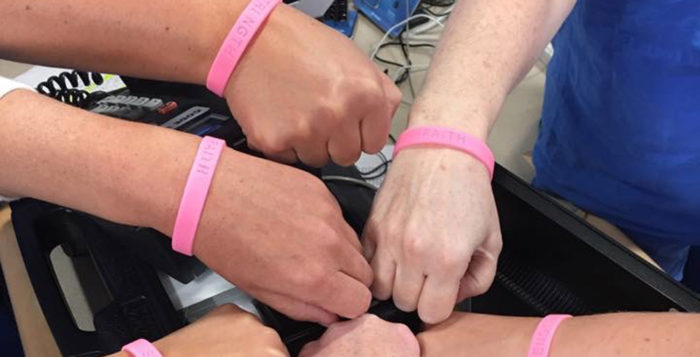 St. Charles Hospital nurses and other staff wear pink bracelets as a sign of support for Desiree Bielski-Stoff, who is battling breast cancer. Photo from Bielski-Stoff.