State: Former lawmakers waited too long to seek back pay

Attorney for two former legislators argues ‘they are due’ lost wages from pay freezes, furloughs they voted to approve 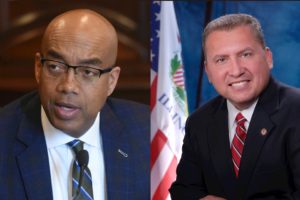 SPRINGFIELD — The state’s attorney general says two former lawmakers should not receive back pay for frozen cost-of-living increases and forced furlough days because they previously voted to approve the two laws and waited “for so long” to file a lawsuit challenging their constitutionality.

Those laws, a Cook County judge ruled last month, violated an article of the state’s governing document that dictates legislators’ wages cannot be changed during the terms for which they were elected.

Noland is now a judge in Kane County; Clayborne is an attorney.

Through a statement issued in July by their attorney, Michael Scotti III, of the Chicago-based firm Roetzell & Andress, the former lawmakers said the lawsuit was filed “to protect and vindicate the independence of each legislator.”

“It is our hope that the Circuit Court decision will be followed and the impacted legislators will be paid what they are due,” they said in the statement.

The lawsuit is applicable only to Noland and Clayborne, but its outcome could create an avenue for other lawmakers to seek the same financial reimbursement.

Potentially, those lost wages could be sought by and paid out to all members of the General Assembly who were affected by the statutes the judge deemed unconstitutional — the cost-of-living freeze, effective from July 2009 through June 2018, and the furlough days, effective from 2009 through 2013.

But the Illinois attorney general’s office argued in a court document filed Aug. 5 that Noland and Clayborne’s voting history — each “voted repeatedly in support” of the pay freezes and furloughs — and lack of previous legal action negates their claim for lost wages.

The two voted “fourteen separate times over the course of nine years” in support of the statutes which their lawsuit claims are unconstitutional, the document states. It adds that Noland filed the case six months after he left office, and Clayborne joined the suit seven months after he announced his retirement from the General Assembly.

The lawmakers’ lawyer responded in a court filing Wednesday that said the attorney general’s office’s argument “has no merit” because it was the state that waited too long to challenge the suit, filed in June 2017.

The state also has stated in court documents that Comptroller Susana Mendoza should not have to issue back pay to Noland and Clayborne because the next fiscal year’s budget was already approved and there is no appropriation for the additional expense.

Lawyers with the attorney general’s office added the statute of limitations for such cases — “constitutional claims for monetary relief” — is five years.

That reasoning does not work in this case, according to the document Scotti filed Wednesday, because Noland and Clayborne are former lawmakers. They “were public officers, whose salaries were incident to the office, and were protected by the … Illinois Constitution.”

Scotti cited a legal principal that excludes the government from statutes of limitations.

In a July interview with WGN Radio, Mendoza called the lawsuit “disgusting on so many levels.”

“It’s nothing more than a nasty money grab by these politicians that frankly don’t deserve to have ever served, as far as I’m concerned,” she said. “… But in this case, these guys do not deserve a penny. I feel so sad for taxpayers that they ever actually served because they were just serving themselves and they continue to just serve themselves.”

The next hearing in the case is set for Sept. 9.