$2.44 billion in transportation fixes would rely on gas tax increase, others

Published by Capitol News Illinois on May 09, 2019 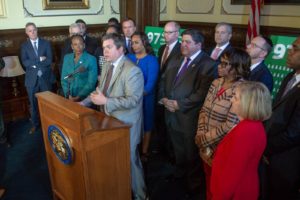 Rep. Mike Zalewski, a Riverside Democrat, talks to reporters during a news conference April 9 in Springfield. Zalewski is the House sponsor of a $2.44 billion plan to pay for state transportation infrastructure improvements that hinges on a hike in the motor fuel tax, vehicle registrations and fees. House Bill 391 advanced to the full House out of the Revenue and Finance Committee on Thursday. (Capitol News Illinois photo by Jerry Nowicki)

SPRINGFIELD — House Democrats advanced a $2.44 billion plan to pay for state transportation infrastructure improvements Thursday that hinges on a hike in the motor fuel tax, vehicle registrations and fees.

It is the “beginning of a dialogue” for how to fund road, bridge and mass transit projects, said Rep. Mike Zalewski, a Democrat from Riverside who is sponsoring the bill.

Republican lawmakers took issue with components of the revenue measure — a boost to the state’s motor fuel tax, an omission of a bonding option and giving local governments the ability to levy an additional gas tax, to name a few.

One representative, Mokena Republican Margo McDermed, also protested the lack of time her colleagues had to prepare for the Revenue and Finance Committee meeting. Members, she said, received a copy of the legislation Wednesday.

“We’ve been negotiating and discussing all of the issues — which are large and complex and have many moving parts and involve many, many different interest groups — for months, and to say that we’re going to have a hearing that lasts less than an hour and move this bill out is not an act of good faith, it’s not good governance and it’s the usual bullying that goes on in this Illinois House of Representatives and I need to make that clear,” she said. “We all know this bill is going to get out. We all know we’re going to keep working, but this is an evil, evil process.”

It also bumps registration fees for passenger cars by $50, to $148. Driver’s license fees would double to $60, and the fee to register an electric car would be $1,000. The increases would also be indexed to increase with inflation.

The main author is Marc Poulos, executive director of the Indiana, Illinois and Iowa Foundation for Fair Contracting. He said the “best way” for voters to think about the bill is a means to restore the state’s infrastructure.

“We need to get a large influx of additional revenues into the system so we can fix what we have, then if we want to talk about bonding and building for the future, we can talk about that later,” Poulos said.

The motor fuel tax bump would be a hard pitch for Democratic Rep. Emanuel Chris Welch, from Hillside, to make to his constituents, he said.

“From 19 cents to 44 cents a gallon for gas is a lot of money and to go home and try to explain that to people — that’s hard to do, especially in a district like the one I serve,” Welch said.

And Rep. David McSweeney, a Republican from Barrington Hills, said while it is “clear” the roads, bridges and other transportation infrastructure in the state need attention, raising the motor fuel tax is not the way to pay for it.

“I oppose this bill because I don’t support an increase to the gas tax, and I think we need a capital bill, but I think we should use the revenue from the sports gambling bill,” he said.

Democratic Gov. J.B. Pritzker wants to legalize that practice, and he projected $200 million in revenues from sports gambling licensing fees in his proposed budget. It is one of several revenue streams in Pritzker’s budget that are not guaranteed to become law.

Rep. Robert Martwick, a Democrat from Chicago, questioned part of the plan which would hike the fee to register an electric car from $35 for a two-year registration to $1,000 for a one-year registration. He asked Poulos where the new figure came from.

“Electric vehicles have been driving on the system for free for some time now,” Poulos said. “… We’re not trying to stymie electric growth, in fact, quite the opposite. Until we’re ready to have a real conversation about moving off of gas tax and moving off of miles driven, then this is the route we’re going to have to go.”

He added the new registration fee would generate over $6 million in new revenue.

All this new money is important, Republican Rep. Steven Reick, from Woodstock, said, because Illinois is the “belt buckle of the national transportation system.”

“We’ve got to figure out a way to make sure that we maintain that position, improve upon the quality of delivery and find a way to pay for it that’s not going to hamstring everybody else,” he said.

One problem Illinois Chamber of Commerce President Todd Maisch said has with the proposal is that it does not allow for adequate opportunities to sell bonds. It is important because that is how Illinois is going to “address bridges,” Maisch said.

The bill also includes three clauses — what Poulos calls “self-help provisions” — that allow local governments to levy an additional motor fuel tax on top of the one charged by the state.

“Authorizing municipalities to add an additional tax onto what already will be a very difficult tax increase will really add up to make gas very expensive,” Republican Rep. Joe Sosnowski, from Rockford, said.

The legislation, House Bill 391, moves to the full chamber.

While House lawmakers had their first discussions of Zalewski’s bill Thursday morning, a Senate subcommittee held the latest in a series of statewide meetings to discuss infrastructure at the Capitol later in the afternoon.

“We’ve been on the road since January,” said Sandoval, who chairs the capital improvements panel. “It’s been enlightening to say the least.”

In the eight hearings across the state, the committee heard about infrastructure needs and pressed local government and business interests to come up with ways to raise the revenue for them.

At its eighth such meeting Thursday, the committee heard from Will County, Kendall County and Illinois State Police officials, as well as the village administrator from Rantoul.

Denise Winfrey, speaker of the Will County Board, told the committee her board would be willing to pass a resolution in support of legislation to raise the motor fuel tax.

Brendan Kelly, director of the Illinois State Police, testified about aging state police buildings — including a crime laboratory and forensic science facility — in Will County, which are “in dire need” of infrastructure improvements either in the form of a new building, renovation of an existing building or a combination of the two.

At the same time the committee was meeting, higher education officials from around the state were holding a news conference to lobby for building infrastructure at their state-owned campuses.

The university leaders were speaking as part of the Build Up Illinois Coalition, a group of advocates that launched a lobbying effort aimed at “ramping up pressure on legislators and Gov. Pritzker to approve a robust capital program” that includes more than road and bridge work, according to a news release.

This would require a revenue source separate from the motor fuel tax, however, as those funds are constitutionally mandated for use on road and bridge safety.

“While we understand and appreciate that Illinois is experiencing prolonged financial challenges, we also recognize that additional revenue is necessary to provide the level of support higher education needs,” Illinois State University President Larry Dietz said.